Then vs. Now: How the Debate Over a Distant Planet in the Solar System Has Evolved

The region of our solar system beyond Neptune, called the “Kuiper Belt”, has seen some seriously increased attention in recent years. From discoveries of new objects nearly as big as Pluto, to the demotion of Pluto to “dwarf planet” status, to the first high-res images of Pluto from the 2015 flyby of New Horizons, everyone’s favorite Kuiper Belt Object has been at the forefront of discussions about the trans-Neptunian solar system. This post won’t focus on Pluto, however. Instead, I’ll discuss what we’ve learned about the farthest reaches of the solar system beyond Neptune in the twelve months between the 48th and 49th meetings of the American Astronomical Society Division of Planetary Science (AAS DPS).

Almost two years ago, a different set of objects started competing with Pluto for the title of “the hottest topic of the outer solar system.” This set of objects includes the farthest objects we know of that orbit the Sun further out than the Kuiper Belt. They orbit with an average distance from the Sun more than 250 times the Earth-Sun distance, taking more than 4,000 years to complete a single orbit! What’s so special about these objects? Well, they appear to be grouped in a peculiar way -- their orbits all point in similar directions in physical space! This is very unexpected -- as small Kuiper Belt Objects orbit the Sun, they may experience (in)frequent gravitational interactions with Neptune or the other giant planets. Since the giant planets are so much more...well...giant, repeated interactions result in changes to the smaller object’s orbit. This “gravitational sculpting” by Neptune or the other giant planets is fairly random over timescales comparable to the age of the solar system. Thus, we would expect the orbits of objects affected by gravitational sculpting to be arranged randomly.

The curious grouping of the most distant objects we know about is the original motivation for “Planet Nine.” Planet Nine is predicted to be a “mini-Neptune” -- that is, an icy giant planet with a mass about ten times that of Earth’s. Gravitational sculpting by Planet Nine (adding to Neptune’s gravitational sculpting) could explain why the orbits of these very distant objects appear to be grouped together. There is, however, at least one more possible explanation... 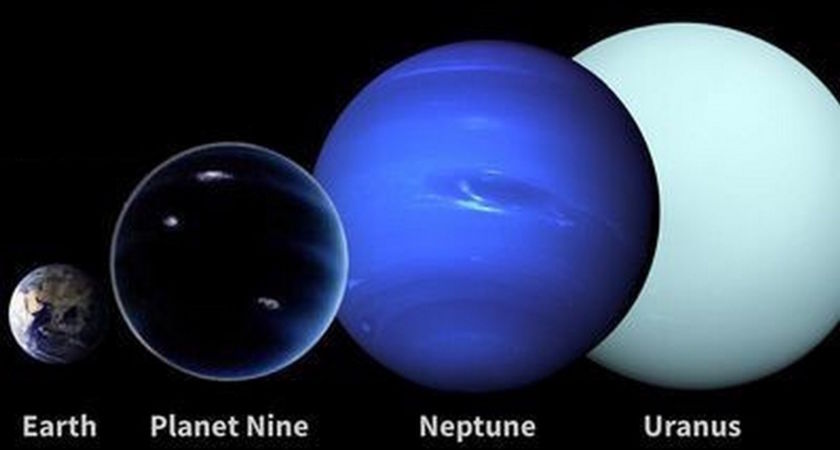 48th Meeting of the AAS DPS

The January 2016 proposal of Planet Nine made a giant splash in the ocean of planetary science. Even when it came time for DPS48, nearly nine months later in October 2016, the waves from that splash were still high and strong. Leading solar system astronomers dedicated months of effort toward predicting where Planet Nine might be in the sky. They devised extremely clever methods to make these predictions. One group of astronomers used inconsistencies in the distance from Earth to Saturn measured by Cassini (spoiler alert: there turned out not to be be any inconsistencies in those measurements after all...but it was a clever idea nonetheless). Another group of astronomers searched through decades of data from several different surveys just in case someone had missed an elusive distant planet in the images. All of this effort culminated in a series of talks at DPS48.

Unfortunately, no one found anything. No previously undiscovered distant planets, though all of the search efforts did turn up some quickly-moving distant brown dwarfs (objects outside of our solar system that are too small to be stars but too large to be planets). However, another idea was beginning to emerge. What if the curious grouping of very distant trans-Neptunian objects (TNOs) isn’t actually real? That is, what if it is actually an observational effect purely due to where we happened to point our telescopes?

The effect I just described is known as “observational bias” -- the idea that we will preferentially discover objects on orbits that put them in a position on the sky that our telescopes are already pointed at. You might ask “well, why don’t you just point your telescopes at other spots on the sky?” Unfortunately, the solution isn’t that simple...telescope time is very expensive, so astronomers generally like to maximize that time by pointing the telescope to spots where they know they will find things. Then they must consider several other factors, such as seasonal weather patterns -- with winter comes clouds, which means that the parts of sky that are visible only during the winter are considerably less well studied and searched. As a result, determining whether the grouping of the most distant TNOs is a real effect or not becomes a very difficult problem, one that was not solved in time for DPS48. 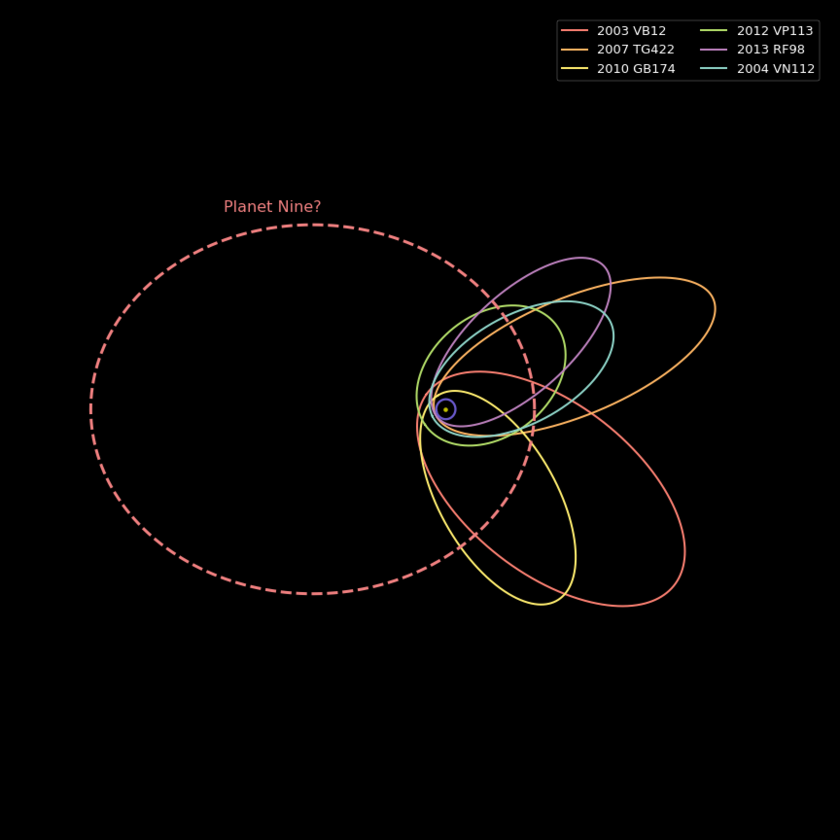 The solar system beyond the Kuiper Belt (Jan. 2016)

The six original objects used in the January 2016 proposal of Planet Nine.

49th Meeting of the AAS DPS

So how has the evidence for the proposed Planet Nine held up over the course of the past year? The jury is still out, actually (though the opposing sides in the debate would probably be ready to argue that with me). At the 49th meeting of the AAS DPS (referred to as DPS49 from now on), leading solar system astronomers gathered after several months of back-and-forth debate. I want to highlight two especially notable talks at DPS49. The talks summarized two studies from Summer 2017 that reached completely opposite conclusions regarding the overall importance of observational bias on the observed grouping of distant TNOs. One, conducted by the Outer Solar System Origins Survey (OSSOS), concluded that the observed grouping is due entirely to observational bias. The other, conducted by Dr. Mike Brown (an original proposer of Planet Nine, together with Dr. Konstantin Batygin), concluded that the observed grouping cannot be explained by observational bias. Well now, that’s confusing. Does observational bias completely explain the observed grouping of the most distant TNOs, or does it not? The truth is that we don’t know (again, cue up the arguments by both sides of this debate). We simply don’t have enough data yet!

Further complicating the debate, a number of other studies examining additional possible evidence for or against Planet Nine (aside from the grouping of the most distant TNOs) were presented at DPS49. One particularly interesting study conducted by Juliette Becker of the University of Michigan analyzed the gravitational sculpting effects of Planet Nine on the most distant TNOs over timescales comparable to the age of the solar system. The study found that many of these objects would crash into the Sun or be ejected from the solar system completely if a solar system containing only the known planets is considered. How, then, are we able to observe them today with our telescopes? If Planet Nine is added to the solar system, it can actually help offset gravitational interactions that might otherwise lead to the unfortunate demise of the TNO. The help from Planet Nine would allow these objects to “live” longer in the solar system, such that they might still be around after 4.5 billion years (i.e. the present day) to be observed with our telescopes!

The glaring problem with the study I just described is that it assumes Planet Nine exists. But again, we still don’t know whether it exists! There is some hope, though -- the proposal of a new planet in the Solar System sent astronomers to telescopes around the world in a mad dash to find it. In the process of searching for Planet Nine, they have discovered several more extremely distant TNOs that would be affected by Planet Nine’s gravity, if Planet Nine exists. So while there is no new planet to report, additional discoveries of extremely distant TNOs are the next best thing! 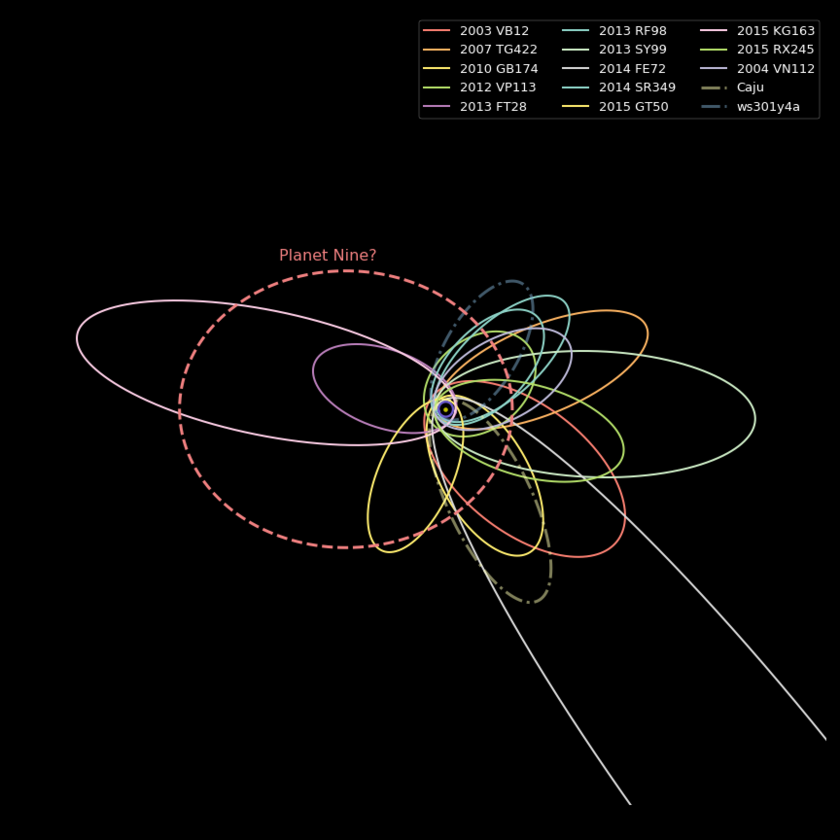 The solar system beyond the Kuiper Belt (October 2017)

The objects known as of October 2017 that would fall into the realm of influence of Planet Nine, up from six to over a dozen.

Toward Future Meetings of the AAS DPS

Where do we go from here? Ultimately, the conclusion that everyone involved with the Planet Nine debate can agree on is that we really need more data. We need more discoveries in the poorly-studied distant reaches of our own solar system. Only then will our picture of this region begin to fill out, like a very fuzzy television channel coming into focus. Fortunately, the world’s best astronomers are hard at work using some of the world’s best telescopes to bring the picture into focus. We’ll soon know whether Planet Nine really exists! 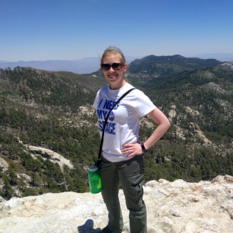