Microbes exist deep inside Earth’s craters. Could this be the secret to finding life on other worlds?

Planet Earth possesses amazing biological diversity. Every corner of this planet—no matter how bizarre the place—is inhabited by microorganisms. This includes impact craters.

Meteorite impacts are common throughout the solar system, and Earth is no exception. The extinction of the dinosaurs some 65 million years ago was a result of a huge meteorite crash. Although the loss of the dinosaurs was tragic, impacts like these might be beneficial for other organisms. They can provide conditions for microbial communities to colonize and grow in environments where it is otherwise quite difficult to live.

Studying astrobiology at these not-so-hospitable places is the best way to understand how life could be living beyond our world. Take endolithic microbes, for example. The word endolithic means “inside a rock.” These organisms can literally survive inside cracks within rocks. They extract energy from the minerals inside the rocks to maintain their metabolisms.

Organisms known as cyanobacteria, which are a type of autotrophic (self-sustaining) bacteria, can use rocks under craters as shelters to survive.

In polar regions, these endolithic communities have an advantage over other organisms. Like moving from a 3-star to a 5-star hotel, organisms moving from a hostile environment into rock cracks enjoy better living conditions. Researchers have been studying these curious impact habitats in polar regions for the past decade. A team led by Alexandra Pontefract, including scientists from Canada, the UK and Australia, just completed the first comprehensive study of the microbial diversity found in such an environment—in this case, in a crater on Devon Island in the Canadian High Arctic. The work, published in the Journal of Astrobiology, seeks to answer the question: How much did the impact affect the microbial diversity in these endolithic communities? 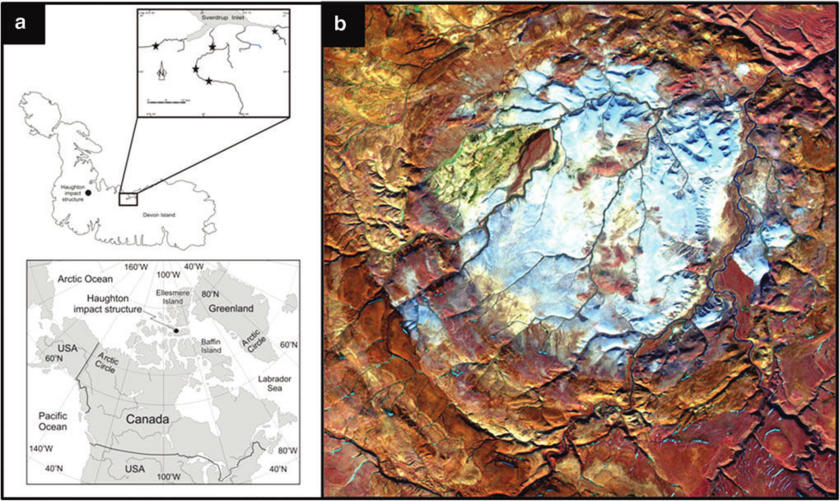 (A) The location of Devon Island in the Canadian High Arctic (bottom) as well as the location of collected (top). (B) Landsat true-color image of the Haughton impact structure.

To answer that question, the researchers took samples from different sections of the crater to see if there was a relationship between the level of impact and the colonization of microorganisms within the rock samples. They classified the rocks near the center of the crater as extremely damaged by the impact, and rocks farthest from the center as unaffected by the event. When a meteorite crashes, the energy liberated by the event is so great, the rocks which it hits are metamorphosed—completely changed.

These rocks’ minerals are altered due to high pressure shock waves generated by the impact. The more shock a rock suffers, the more transformed and fractured it will be, and as a result, there will be more empty space inside the rocks. Along with this increased porosity, minerals in the rocks are deformed due to the intense pressure. Some grains are turned to glass, which is translucent, helping sunlight penetrate deeper into the rock. This produces a better environment for photosynthetic microbial growth.

Microorganisms such as cyanobacteria were found in all the samples of the study site. As expected, the study showed that the amount of metamorphism the crater’s rocks experienced led to different ranges of microbial diversity.

The counterintuitive result, however, is that rocks which experienced a high shock pressure from the impact were found to have more microbial diversity than other samples that were barely affected by the event, because of the direct relationship between the impact damage and the porosity of the rock. With more empty space, microorganisms can better colonize rocks, and extract nutrients from them more easily.

These results could be useful in the search for life on Mars, given the extraordinary number of craters there. Low temperatures and extremely low water availability govern the surface of the planet, but impact craters could provide a sheltered habitat. If life survived the most chaotic, dramatic and apocalyptic phases of Earth’s geologic history, it would not be surprising if there is, in fact, something living inside a Martian crater. 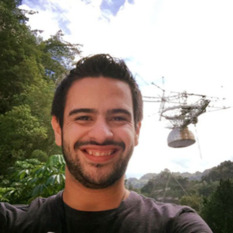 no. it is not. For you see, Earth has been the abode for life for three billion years, so that life has been found at the bottom of craters means nothing. There was life there before and it migrated. Also, as to the gratuitious mention of the Chixicub crater: The entire planet was under extreme stress from tecktonic forces when the giant meteor hit. Were it not for the volcanoes and the lowering of the sea level and many other harmful factors, the gigantic meteor wouldn't have been able to give the coup de grace.

So the answer to the question posed by the headline is... 'No' A perfectly example of scientific enquiry!

Thanking you for the thought-provoking article which is worth some kind of a positive response. quote: "Along with this increased porosity, minerals in the rocks are deformed due to the intense pressure. Some grains are turned to glass, which is translucent, helping sunlight penetrate deeper into the rock". I do not know the subject, but remember that Curiosity shows that Mars was once an "easy" place for life before becoming arid and hostile. Life retreating into rock-crevices would also be protected against direct radiations. Continuing with the example of Mars, there would be an advantage to indirect lighting that would allow photosynthesis without damage. Other favorable environments would be mud and clay (especially with subsisting liquid water at depth), shale, accumulations of pebbles, and deep crevices between stratified rocks A deep canyon in a low altitude area (Valles Marineris... Hellas basin) could also maintain humid conditions later in Mars history. Maybe life or its traces would last longest when a combinations of these arises... along with more recent meteorite impacts. To be able to examine a variety of environments, there would be a real advantage to a high-autonomy fast-moving rover able to cover large distances (hundreds of km) and look rapidly inside "nooks and crannies". This could detect old biofilms or other macroscopic formations of microscopic organisms. It would be better for public outreach too, and I must admit to boredom following the Curiosity trip. Maybe that compromise would be at the expense of more advanced chemistry or of slower drilling activities. But it would seem better to get a good overview. Some kind of secondary crawler-robot with a light and a camera would be a good accessory. All would depend on a primary power source and for this, unfortunately RTG would again be necessary. One mention of the Moon though. I've often wondered if there may water in rubble-filled pits caused by fissuration surrounding craters.