You'll recall from a couple of weeks ago I have been hot on the trail of a most curious solar-system display at the Los Angeles International Airport. After some more digging, I can now relate the rest of the story.

It turns out that public art in Los Angeles has a rich history. In fact, city managers passed a law in 1989 that requires all capital improvements to set aside 1% of the projects' cost to commission public artwork. And so when American Airlines undertook what ended up being a four-year, $300-million overhaul of Terminal 4 at LAX, public art necessarily became part of it.

The competition for the art installation was won by local artist Susan Narduli. When I finally reached her by phone, Narduli admitted that she'd done a lot of interviews over the years about her work at LAX -- but no one had ever asked about the planets there. Instead, most questioners wanted to know about her artistic depictions of nude men embedded in the terrazzo floor. This aspect of the work proved so controversial when unveiled that initially (and I'm not making this up) airport officials covered the figures with paper. But I digress . . .

Terminal 4's renovated area for security is an immense vaulted area with a huge semicircular window facing west. It provided Narduli with a spacious canvas for her concept, collectively titled "The Wonders of the Heavens and Flying," which she completed in 2001. "I was really moved by stories of mankind's first attempts of flight. A lot of them perished doing so," Narduli explained. "Something about this urge to make sense of our world was beautiful to me." So, besides her portrayals of unclad men attempting to take flight (there's less wind resistance that way, I suppose), you'll find a 100-foot-wide, 10-foot-high wall of glass panels showing clouds. Elsewhere, ellipses of dichroic glass, suspended from the ceiling, represent what Narduli terms "a shadow aviary" for passengers to admire.

And the planets? They're casts of colorful backlit glass embedded in the floor. "We worked with a glass fabricator named Ursula Vourvoulis," Narduli recalls, and they went back and forth on how the colors would appear when cast. The planets are depicted in correct order from a central Sun and somewhat scaled in size (Jupiter is 67.2 inches across, Pluto a mere 1.2 inches). "Pluto is the least translucent," she notes, a nod toward the controversy over its planetary status that was already brewing a decade ago. Thousands of small embedded chips represent asteroids circling between the orbits of Mars and Jupiter. 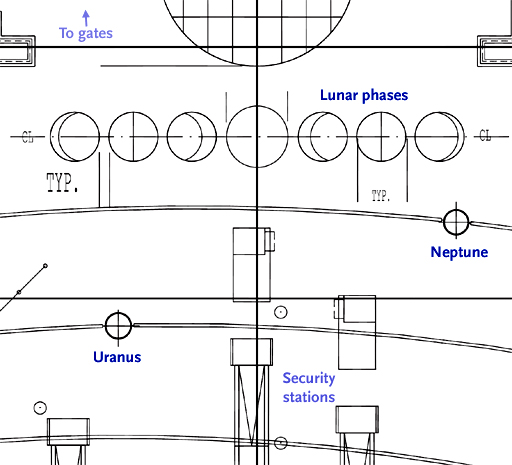 he floor plan for Susan Narduli's "The Wonders of the Heavens and Flying" includes this sequence of lunar phases. For scale, Uranus is 2 feet across.
The Sun itself was cast in what Narduli calls "white bronze" -- a golden-hued alloy of copper, tin, and zinc. As you leave the security area and head toward the planes, you'll encounter a striking set of 4-foot-wide stainless-steel Moons arrayed together to show a cycle of lunar phases.

What's really a shame is that no one photographed the vault's planet-bejeweled terrazzo floor before security dudes moved in with their metal detectors, baggage luggage belts, and crowd-control chutes. The project was just wrapping up when the 9/11 attacks occurred, so I'm guessing that there was some urgency in getting the checkpoint up and running ASAP. The best photos I've come up with are the snapshots below, taken by Ruth Wallach (director of USC's Architecture & Fine Arts Library in Los Angeles) for her website devoted to public art in LA. 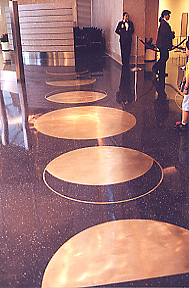 ood photos of the solar system adorning LAX's Terminal 4 are hard to come by. 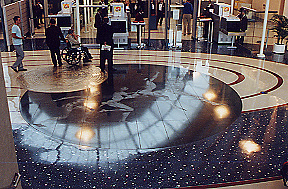 Another View of Terminal 4

Wallach is on vacation at the moment, but when she returns I'll see what other images she might have. And I haven't yet exhausted the media contacts at American Airlines. So stay tuned for further updates!

Finally, I want to thank Emily Lakdawalla and the Planetary Society for the opportunity to be a guest blogger. I've been wanting to get the real story behind this cosmic curiosity for years -- and now I have.