The Sea That Has Become Known

When Jason Davis asked me if I’d be interesting in writing a guest blog post for The Planetary Society, I had just finished my large-scale painting, Mare Cognitum. But I had been bitten by the moon bug several years before, at the 2014 premiere of his documentary, Desert Moon. The film detailed the University of Arizona’s involvement with mapping the lunar surface. I became fascinated with the story of Ranger 7, and how this non-descript, oft-overlooked spacecraft was designed specifically to smash into the moon. I later would learn that crashing million-dollar scientific equipment into space objects was often standard operating procedure. I began to wonder about the human component. How did it feel for the designers and engineers of Ranger 7—and its six, failed predecessors—to spend years perfecting this machine? Years testing, measuring, and tweaking, always with a nagging awareness of the spacecraft’s final (and intended) destruction. 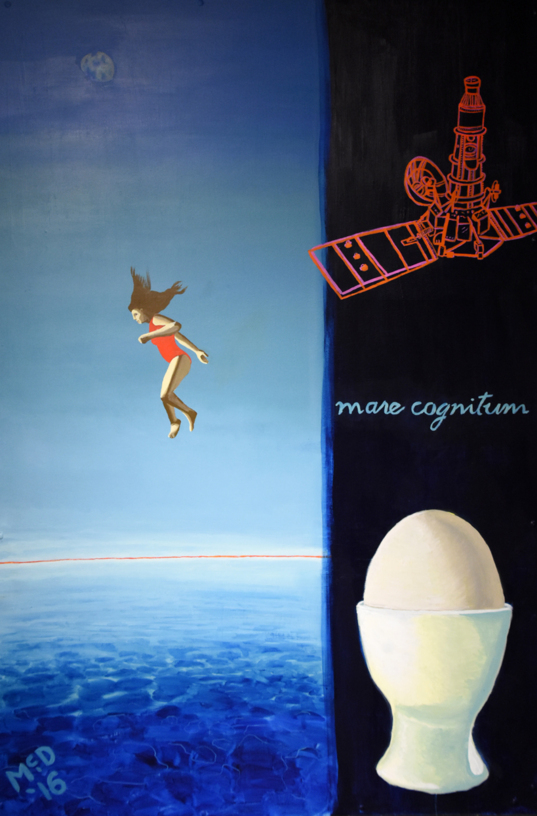 There’s something about the aesthetics of those space-age craft that just enthralls me. Maybe because aesthetics weren’t the objective at all. More like accidental aesthetics. Function was launched so far ahead of form that the result were these other-worldly sculptures alien to everyday life. Look at the Soviet Union’s Luna 9 for an example of this accidental aesthetic. That squishy, bulbous pod stuck on tip of the spacecraft looked more like a clown nose than a landing capsule. But then, just 16 feet from the moon’s surface, a sensor was triggered, and out it popped like a tiny and perfect seed. And, like a seed, it contained the hope of a nation, the future. The seed then opened, revealing delicate silver antennae, a mirror and a camera. Now a sprout, Luna 9 began broadcasting some of the first images of the lunar surface back to Earth.

Sputnik is another great example of accidental aesthetics, with its perfectly spheroid body and elegant spider legs, although it could be argued that Sputnik’s aesthetics weren’t accidental at all. Outfitted in shiny chrome, this celebrity satellite was designed to be seen from Earth: “Look at me! Look at me!” Let’s face it, Sputnik was damn cute! And with a name that means “fellow traveler,” how can you not fall in love?

My painting, Mare Cognitum, is the result of a whole lot of pondering about lunar exploration (Ranger 7) and my feelings as a parent raising two girls. It’s the second painting in a series of what I call proto-narratives: early stories, or undeveloped, visual poems, really. In this large-scale painting (48 by 60 inches), I juxtapose seemingly unrelated symbols, coaxing the viewer to form his or her own answers. While I definitely have an intended meaning within the painting, I purposefully left it vague enough to allow for multiple interpretations.

In the painting, we see a teenage girl in a bright red swimsuit. She is falling toward a deep blue ocean. It is seconds before she breaks the surface of the water. The seascape is empty and cold. It stretches back toward the horizon, where it almost blends into the sky. If not for a thin red-orange line on the horizon, up could be down; falling could be flying. High above, we see a gibbous moon dwarfed by the cloudless blue sky. To the right of the moon, taking up a third of the painting, we see a vertical band of deep, inky blue-black, and in it, a line drawing of Ranger 7. It is glowing—almost neon—in pink and orange. Below Ranger 7, we read the words mare cognitum. From Latin, this translates as “the sea that has become known.” Mare Cognitum is also a lunar “sea” and the site of the Ranger 7 impact. Finally, in the bottom right corner, we see a hardboiled egg resting in a simple white egg cup. It too seems to glow against the midnight blue. The egg and moon—symbols of fertility—the red swimsuit, and the thin red line (which will inevitably be crossed). There is an intentional mix of excitement and danger in the painting. It is the moment before impact. It is the energy between her feet and the surface of the water. It is the hardboiled egg about to be cracked. It is the sea that will be known.

The enduring charm of Luna 9 (left) and Ranger 7 (right).

My intent with Mare Cognitum was to reflect upon the moment when teenagers (girls in this case) cross into adulthood. More accurately, the painting is an illustration of both my anxiety and my exhilaration in raising two daughters. Like NASA engineers, we mothers and fathers devote our adulthood to carefully guiding our children, programming them with not only our values, but the ability to make their own decisions—good decisions—and to learn from their mistakes.

And then they are launched. We watch and we wait for a faint and distant signal. We know they will crash. We know there will be love and laughter. Broken hearts and tears. Pain and joy. Their trajectory is set and all we can do is gaze up into that empty blue sky and hope.

You can see more of Porter's work at www.portermcdonald.com. Mare Cognitum is currently on display at Ermanos in Tucson, Arizona. 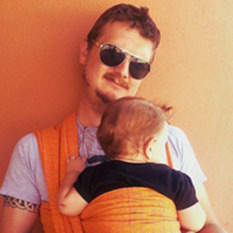