After many years of development, a cutting-edge Russian-German space observatory with little-known contribution from the US is finally approaching the launch pad...or so its scientists say.

Resembling a giant asymmetrical binocular, the Spektr-RG spacecraft is made of two dissimilar telescopes designed to capture intergalactic x-rays, which, fortunately for all but astrophysicists, does not reach the surface of the Earth. Spektr-RG will circle the Sun at a location 1.5 million kilometers away from Earth's nightside, using Earth as a natural sunshade for the telescope’s hyper-sensitive instruments. The spacecraft can stay in this location without much tax in propellant because it is a Lagrange point (to be specific, the L2 point), where the gravitational influence of Earth and the Sun cancel each other, providing a quiet harbor for spacecraft.

There, Spektr-RG will spin slowly around its axis making a full revolution in four hours. Simultaneously, it will follow the Earth around the Sun, completing a full sweep of the sky in half a year. 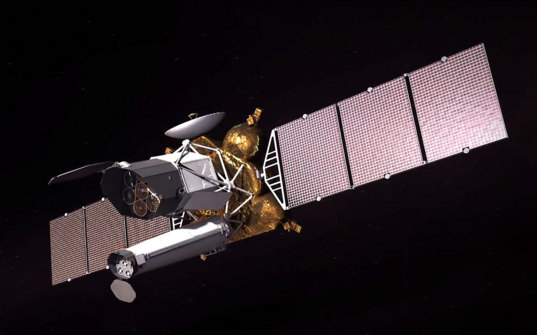 “Beauty of this is that you can get the entire large-scale structure of the Universe in x-rays, revealing very early clusters, which is possible to see,” Mikhail Pavlinsky of Moscow Space Research Institute told planetary.org, “...it will make it possible to practically totally catalog all galaxy clusters which formed in our Universe.”

Although the US German ROSAT space observatory mapped the x-ray sky in the 1990s, Spektr-RG should boost the clarity of the picture by orders of magnitude. ‘The sensitivity of the survey will be 30 times deeper than that achieved by ROSAT,” Pavlinsky said.

To achieve such sharpness, Spektr-RG carries two telescopes: German-built eROSITA and the Russian ART-XC. “We have best x-ray CCD camera ever flown and eROSITA has seven of them simultaneously,” Dr. Peter Predehl, from Max Planck Institute for Extraterrestrial Physics, which built the instrument, wrote in an e-mail to planetary.org.

According to Russian sources, eROSITA is the most complex and expensive piece of hardware ever imported to Russia by the German Space Agency, DLR. The price tug for the telescope is estimated at around 100 million Euro.

Not to be outdone, IKI in Moscow and their colleagues from Russia’s premier nuclear research center, VNIEEF, developed an ART-XC telescope, which will expand the sensitivity of the observatory toward so-called “harder” range of x-ray radiation.

However, before technological marvels of Spektr-RG can begin their pioneering work, its creators must conclude an almost quarter of a century-long saga of building Spektr-RG. The project traces its roots all the way to the 1980s, when Soviet engineers conceived a follow-on satellite to the Granat observatory, launched in 1989.

The initial scheme, which involved more than a dozen countries and five telescopes installed on a nearly six-ton spacecraft, collapsed a decade after the USSR. It was eventually reborn in the first decade of the 21st century with only two surviving participants – Russia and Germany.

After many technical challenges, assembly of the two telescopes finally began, when the Russian-Ukrainian conflict almost derailed the project. The Russian ART-XC telescope depended on a set of unique x-ray mirrors, which were ordered after a long search from NASA’s Marshall Space Flight Center. They were almost completed when Russia annexed Crimea in the spring of 2014. All contacts between Russian and American scientists were suddenly cut, subject to sanctions. Fortunately, after agonized lobbying of scientists on both sides, the US State Department made an exception for Spektr-RG. The observatory was reportedly second on the list of allowed cooperative projects after the International Space Station!

In fact, by most accounts, Spektr-RG ended up being the only Russian spacecraft with sophisticated US hardware onboard. However, the fallout from the Crimean crisis is not over yet. As German and Russian scientists are gearing up for the final assembly of the flight-worthy spacecraft at the beginning of next year, there is a new potential time bomb. 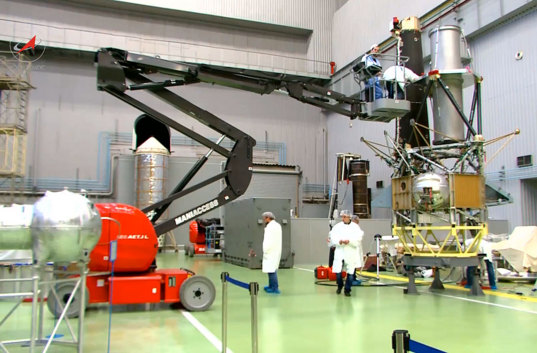 Spektr-RG was expected to ride into orbit on the Zenit rocket built in Ukraine. In the wake of the Crimean crisis, production stopped exactly after the rocket intended for the Spektr-RG mission had arrived at the launch site in Baikonur, Kazakhstan.

However, the rocket is now out of warranty and there are other contenders for the nearly extinct Ukrainian vehicle in Russia. Roskosmos decided to give the remaining Zenit for a commercial mission carrying a communications satellite for the government of Angola. (Contracts for commercial launches often have deadlines with penalty clauses, which explains the situation).

NPO Lavochkin, the prime contractor on the Spektr-RG, publically floated a backup plan to switch the mission to the Proton rocket. The project scientists were not impressed with that prospect to say the least. Pavlinksy characterized the plan to switch to Proton as a last resort.

Behind the scenes, Lavochkin officials told the Spektr-RG team that it would take an extra nine months to re-tailor the observatory for the Proton, but scientists warned that the delay might lead to warranty expiration on some unique components of the Spektr-RG.

According to Pavlinsky, the spacecraft is on track for launch as currently scheduled in December 2017.

“From the standpoint of scientific payload, Spektr-RG is ready to fly in 2017,“ Pavlinsky told planetary.org, “We will have all our pieces together for final integration of the flight-worthy spacecraft at the end of this year.” Max Planck officials did confirm to planetary.org that the eROSITA telescope for Spektr-RG was scheduled to be delivered to Russia around Christmas.

For more information on the history and design of the Spektr-RG project please visit: http://www.RussianSpaceWeb.com/spektr_rg.html