Today, China launched its largest rocket yet, the Long March 5, from the new coastal launch center on Hainan Island. The launch is a major step forward on the country's path to deep space. Liftoff took place after sunset at Wenchang at 20:43 local time (12:43 UTC), stunning thousands of spectators, carrying the Shijian-17 ion propulsion technology experiment satellite towards geosynchronous orbit. The Long March 5 is capable of launching payloads up to 14 tons to geosynchronous orbits. 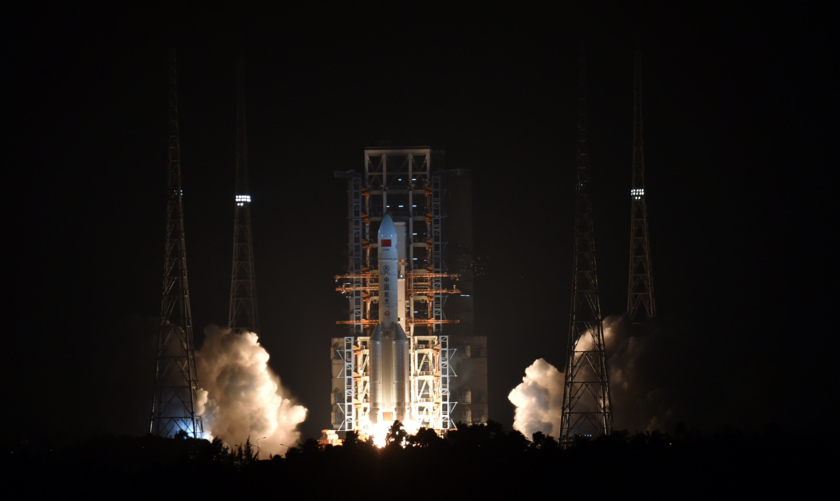 This is game-changing for China. At 57 meters tall and weighing 869 metric tons, the Long March 5 is among the world’s most powerful currently active, comparable to the Delta-IV Heavy. It will allow China to launch components for a large, 60-ton modular space station, starting with the 20 metric ton core in 2018. The space station will eventually share its orbit with a Hubble-class telescope, also to be launched by the Long March 5, capable of docking with the station for maintenance.

The heavy-lift rocket also means China is now capable of carrying out exciting deep-space missions. Next year the same Long March 5 variant as launched today will send the Chang’e-5 probe to the Moon to collect samples and return to Earth, something not attempted since the 1970s. The country’s first independent interplanetary mission – which boldly combines an orbiter, lander and rover in one shot – will head for Mars in summer 2020. China is also developing a deep space strategy for coming decades to make use of these new capabilities, including missions to the lunar far side and the poles.

If some of this sounds like a repeat of past endeavors by others, or lacks the vision of the grand humans-to-Mars plans out there – or even a Moon landing – it’s worth looking at where China came from to reach this point, and consider what they could achieve next. China’s leaders approved the ‘Project 921’ human spaceflight program in 1992 when the country’s economy was around 20 times smaller than today, setting the upcoming space station as the ultimate goal.

With a relative lack of resources but some technological assistance from Russia, just over a decade later in October 2003 Yang Liwei became the first Chinese in space. But for the next stage, building the space station, China needed new, larger rockets, with more powerful engines burning different fuels to the now-aging Long March launch vehicles powered by highly toxic hydrazine. Developing the new rockets would take more than a decade of planning and overcoming diverse challenges.

The 5-meter-diameter core of the Long March 5 posed big engineering and manufacturing challenges, requiring strength while having a thickness of just 3 millimeters. The country’s rail, road and tunnel networks cannot handle such a huge rocket, so they had to develop a new, coastal launch center. Transporting components from Tianjin in the north to Hainan in the south required the building of new ships, Yuanwang 21 and 22.

But after more than a decade of development, channeling resources, and overcoming delays from engine test failures, China now has a new and adaptable heavy-lift rocket, and has big plans to use it. There are other benefits, too. The Long March 5 is part of a new generation of rockets including the medium-lift Long March 7, whose modular design and manufacturing bring benefits in terms of cost, preparation time, and reliability.

China’s progress to this point has been a long, steady march, but with this success the pace may now pick up. The Long March 5 experience is helping China’s early work on the Saturn-V class Long March 9. Meanwhile, the first Long March 7 launched in June tested a scale return capsule intended for future deep space use.

Looking at what China has achieved, its ability to plan ahead and the various pieces being assembled, today’s launch could be seen as a one more step towards not only establishing a permanent presence in low Earth orbit, but also putting people back on the Moon.

If China pulls off an "orbiter, lander and rover will head for Mars in summer 2020", it will mean they have virtually caught up with the US, and may well then be ahead of Europe and Russia. Hopefully (I think one can say presumably) they will head extremely rapidly for Mars life detection and for sample return. Even more hopefully, they will head equally rapidly for life detection on Europa and Enceladus, missions to Ceres etc, all to demonstrate supremacy over the US! These would be devastating blows to US prestige. But the fact is that the prospect of such an outcome might trigger a new "space race', and a golden age of planetary exploration. So I have to say I'm hoping for it.

China now has the largest launcher in the world, at least en par with Delta IV Heavy. And until Russia gets its Angara 5 going which is considerably larger. The SLS is a sad story which might remain a jobs and bribes program until it is canceled. Falcon Heavy is delayed and delayed and SpaceX doesn't seem to give it any priority. They said they stopped its development to focus on solving the first F9 failure. Maybe it is on the ice now again.

So i know Chinas economy is thriving and this is good, this article however makes it sound as if there space explorations are also striving so if they keep on this pace and America keeps on theres how long will it take for China to surpass us on our conquest for greater space missions. By River FOR MRS HERROLD