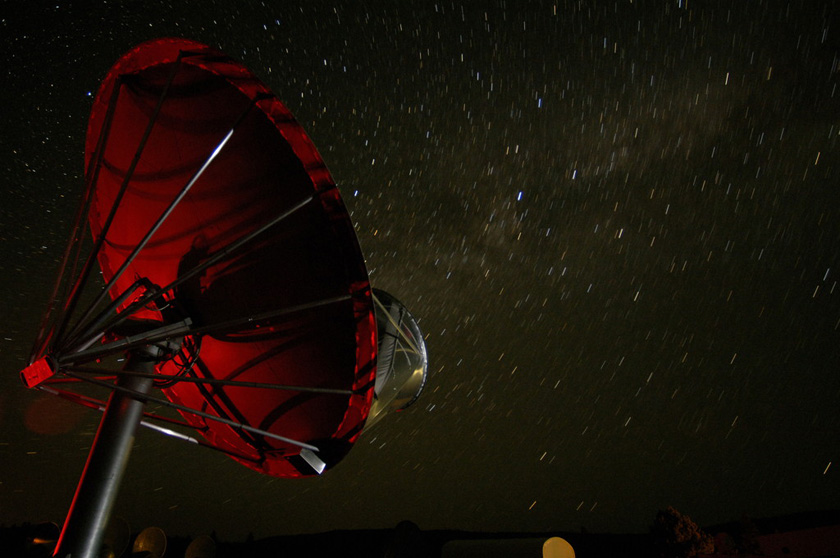 The Allen Telescope Array looks for signals from among the stars.

But—and it’s a big but—I began this post by saying “at least not yet.” So what might cause me to change my mind? How might we prove the extraordinary claim that this signal is, in fact, a civilization trying to communicate with us?

First, this signal must be detected by at least one other antenna located somewhere else in the world. My colleagues at the SETI Institute are already working on it, and have observed the star for several hours. So far they have nothing to report.

Second, we must analyze the signal to be certain that it is not coming from a human source.

Third, if the signal is detected repetitively, we can analyze it under the assumption that it might have content E.T. wants to share with us. Whatever that message might be—the digits of Pi, the first prime number, their encyclopedia, or some images of themselves—we can quickly find out if ET is trying to tell us something, and what that something is.

We are not there yet. In the past, especially during the tumultuous history of SETI, astronomers briefly thought that they had discovered a signal (see “Aliens on Line 1”). As technology evolves, and more searches occur, we may discover more signals that look promising at first but don’t pan out. But the search continues… in fact, in the scale of the age of our solar system, it has just begun.

also, if the signal source is 95-ish lightyears distant, then it would be replying to a signal sent by us 190-ish years ago. like around 1825. by radio... or am i wrong about that?

It also depends on the band the signal was broadcasting at. Not all waves meet the same resistance. I would like them to fill in the blanks there as well. Also, latency could disrupt the time-line of the signal / natural happening. If the signal is being broadcast at a range that may be a logical step to narrowing down whether it is intelligently driven. However, there is some speculation that it was on a military band. Which, at least in my mind puts a big wedge between this being a military test by one of the governing bodies and it actually being intelligent life.

One more note though: What makes this very exciting and really makes this an interesting case. There is very little chance any natural event could send a signal with the power required - 95 light years. I can only imagine that it would take a great effort to duplicate a transmission on that scale as well. With that said, I can see why SETI is so excited. It definitely narrows the possibilities regarding the driving force behind this. Of course you have to rule out man made devices and our own geological factors. If this did indeed come from HD164595 it would be a big deal to say the least.

My only hesitation with Carl's quote (and I am a major fan) is that I perceive that *any* claim requires *any* evidence...does not need to be... "extraordinary". neil (deGrasse Tyson) illustrated this point well when he asked anyone who next has an opportunity to be abducted, to return with an alien artifact - an ash tray, a pen, a scrap of paper (o'course, the alien equivalent thereof). That **ANY** artifact of alien origin would all but surely possess the chemical signatures of materials....alien to our manufacturing processes. No need for 'extraordinary" to do the trick. The radio equivalent may well apply.

Given the fact that a signal coming from a distance of 95 light years away and with no immediate recurrence, the amount of energy behind this outburst of signal must be very strong indeed. If there are alien races living all over our galaxy, the rate of evolution in their technologies should vary greatly. Don't forget that our first nuclear explosion had only occurred in 1945. This SETI signal may very well be the first nuclear explosion occurred 95 years ago on HD164595b. This means that whoever living on HD164595b is now 24 years ahead of us technology-wise if we assume the rate of evolution in nuclear technology is constant everywhere in our universe.

Based on data collected by all previous space missions, finding a new element is almost impossible. There are some speculations on new elements found near nebulae, but planets within our solar system seems to have a common set of basic elements (periodic table). However, the chemical complexity at molecular level within each planetary system may vary greatly. We have created many radioactive elements over the last 70 years. Alien races can easily replicate our successes in creating these elements. The nuclear age has totally changed our society. It is the stepping stone to all kinds of technological breakthroughs.

Hello again. Just to make a few more notes regarding the power that would be required to transmit. If we were drawing rough comparison it would require an entire stars power to transmit at a "wide range broadcast" 2.7 GHz freq. with redundancy. Our first broadcast 114 years ago to date has traveled 657,955,387,208,000 miles. This transmission has traveled 552,590,785,079,259.1267 miles. So our transmission is shy 105,364,602,128,740.9 miles. Our first signal will arrive at the destination in 17.92334 years. So we can eliminate this being a response. Also, if this was an event involving celestial bodies it would broadcast from low to high frequency. This however, only broadcast at 2.7 GHz. This changes the whole dynamic at what may be involved and also spells out this may be of intelligent design. If we can rule out the other determining factors, (military test) even if we don't receive a second signal. We should definitely open this up for further investigation and / or study. As it would now become very probable as this is the only transmission of its kind in the past 29 years of SETI and 80 years of government analysis. This definitely warrants further investigation, even if it's only to serve us geeks and our curiosity.

@ScienceNotFiction: “This SETI signal may very well be the first nuclear explosion occurred 95 years ago on HD164595b.” Do nuclear explosions send out radio signals, least of all ones which can be detected 95 light years away? The sounds more like fiction than science, and speculative (“may well be”) fiction at that.

There is one point that some SETI searchers refuse to consider. Just because a potential artificial signal was detected only one time they say it is not artificial and in nature it would repeat automatically, even though that particular signal may have not repeated. Well, not always. Most likely if it is artificial and if monetary or political factors play in, similarly or exactly the same as we do, there simply may not be a 2nd transmission. We did a 1 such shot transmission from Arecibo to M13 back in 1974. Are we going to do it again? Hmmm, let me send a budget proposal and see what happens. With that said let add our currebnt technology into the equation and relook at M13. Was that destination a wasted shot? If so, lets pick a new target and try again. The Kepler spacecraft has given us many viable targets as well as other astronomers to decide upon.