Summer 2016 issue of The Planetary Report

The Summer 2016 issue of The Planetary Report is in the mail! Planetary Society members who want a head start on reading can access the electronic version here.

Ceres—the largest body between Mars and Jupiter—has long defied characterization regarding its true nature. Is it a star, a planet, an asteroid, or a comet? Scientists have now settled on “dwarf planet,” making Ceres the only body of its class to travel around the Sun purely within the orbit of Neptune. Since its arrival at Ceres in March 2015, the Dawn spacecraft has been working hard to help scientists begin to understand the makeup and origins of this fascinating world. Simone Marchi tells us how. 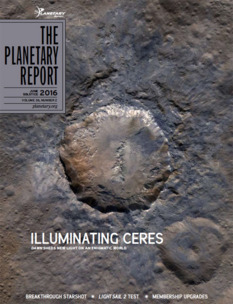 Summer 2016 issue of The Planetary Report

2016 is the one-hundredth anniversary of the birth of the United States’ National Park system, and parks all over America are holding their own centennial celebrations. This past spring, California’s Death Valley National Park invited our own Mat Kaplan to converse with famed SETI scientist Jill Tarter, along with academic astronomer, artist, and photographer Tyler Nordgren, as part of their “Celestial Centennial.” Mat asked Jill and Tyler to talk about the sense of awe that fires their passion for discovery.

There are some new players on the solar sail innovation scene. Conceived by billionaire Russian physicist Yuri Milner, Breakthrough Starshot will utilize a swarm of miniature solar sails—powered by lasers—to journey to Alpha Centauri in about 20 years. This past April 12, Milner, Stephen Hawking, and Ann Druyan announced the start of their audacious new mission. Jason Davis traces the Society’s connection.

Meanwhile, The Planetary Society’s LightSail 2 is getting in shape for its launch to Earth orbit in 2017. Bruce Betts describes the modifications, additions, and upgrades that will make LightSail 2 a better and smarter spacecraft.

Plus, Casey Dreier talks about the complex relationship between U.S. presidents and the space program, Kate Howells applauds our volunteers, and Bill Nye reflects on our continuous leadership in making space exploration happen.

The Planetary Society’s mission is to empower the citizens of Earth to advance space science and exploration. In so doing, we want to help everyone to know the Cosmos and our place within it.

We invite you to join us in this effort.