A year ago, the New Horizons team was convening in Baltimore for the Pluto encounter period. Over the following weeks, we saw Pluto and Charon go from being mottled blobs to worlds that are more fascinating than we could have ever imagined. On July 6 at Lowell Observatory in Flagstaff, Arizona, the science team convened at the place where Pluto was discovered. 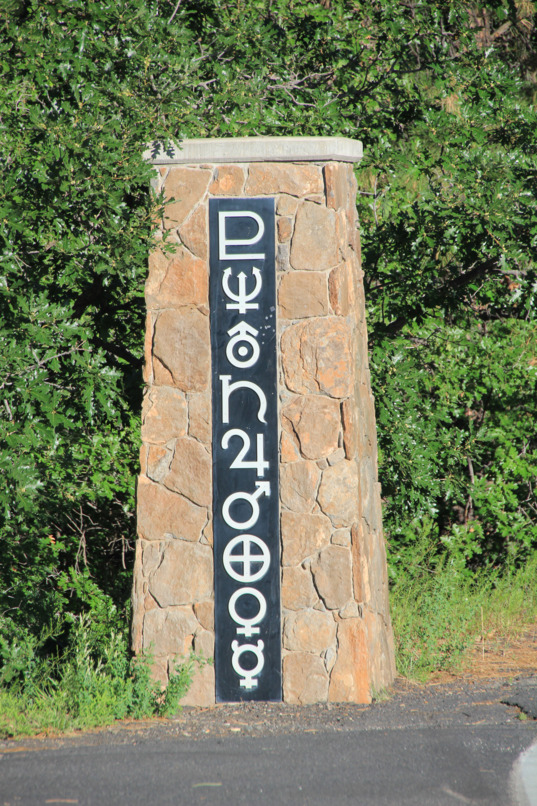 At the Lowell Observatory gate 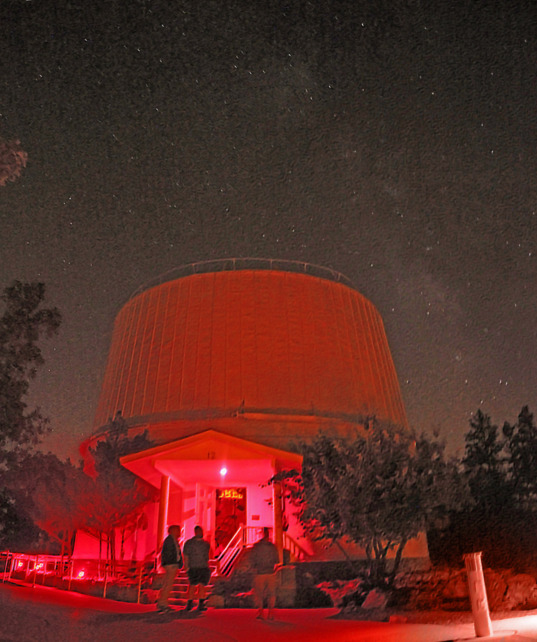 The Milky Way over Lowell Observatory 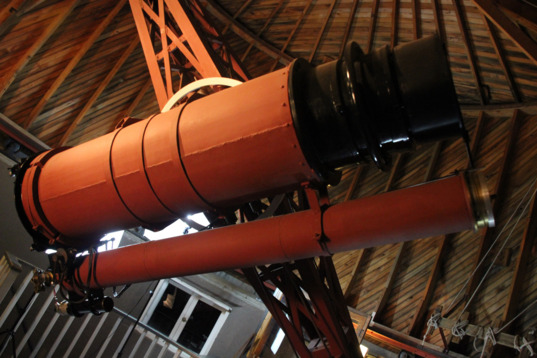 The telescope used to discover Pluto

The meeting started with a standing ovation for Alice Bowman and the mission operations team that saved the mission from its anomaly that caused it to lose contact a week before the encounter. Then came status updates. 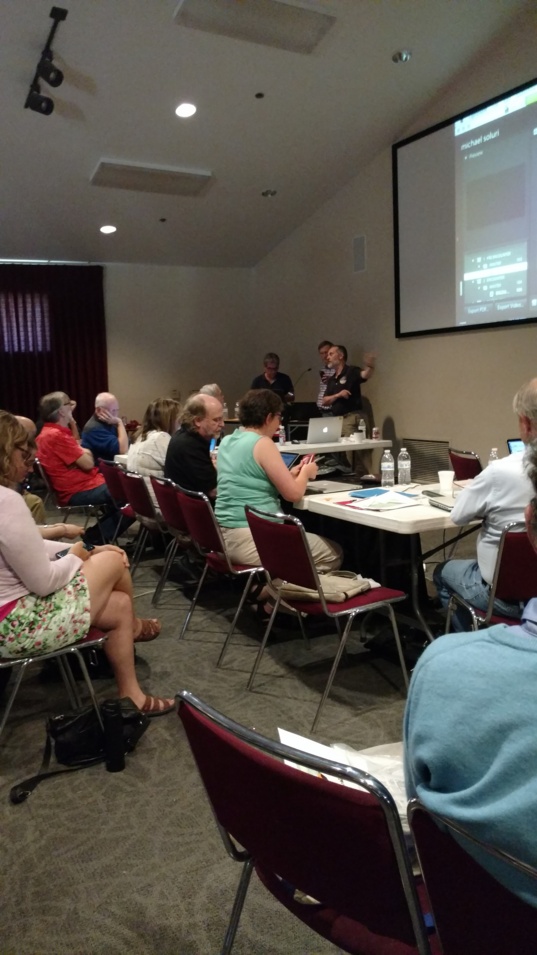 Eighty percent of the data has now been downlinked. Once the remaining data has been returned, the datasets will be verified and then deleted from the spacecraft. You may notice that you never see New Horizons images with missing chunks, as was common in Voyager images and occurs from time to time even in contemporary images from orbiter missions such as Cassini. This is because it has recorders than can hold all the data from the flyby. Voyager could only store a few dozen images (or their equivalent in other data) onboard, so once it played data back, it was overwritten with new data. In the case of Cassini, with the constant influx of new data, its recorders have to be cleared more often. Since New Horizons has nothing to do right now that requires massive data storage, it can go back and re-return any lost transmissions. However, once it is verified that the dataset on Earth is complete, it will be cleared. 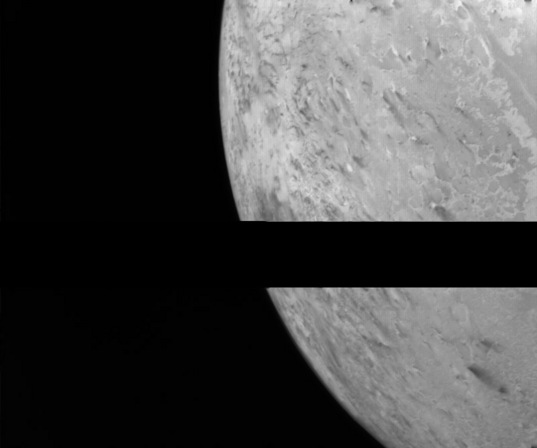 Example of Voyager 2 transmission dropout in an image of Triton

This is because New Horizons has a new target: 2014 MU69, a small, primitive KBO that it will encounter in 2019. The extended mission was officially approved with the highest rating of any mission extension request this year, leading to a celebratory mood at the meeting. The extended mission includes not only this flyby, but distant studies of relatively “close” KBOs. Additionally, the spacecraft will take advantage of its unique vantage point to look for ring systems around Centaurs (small bodies sharing an orbit with Saturn), to try to get an idea if they are common or if the ring system found around the Centaur Charliko are an anomaly. It will also do heliospheric science and study cosmic dust. 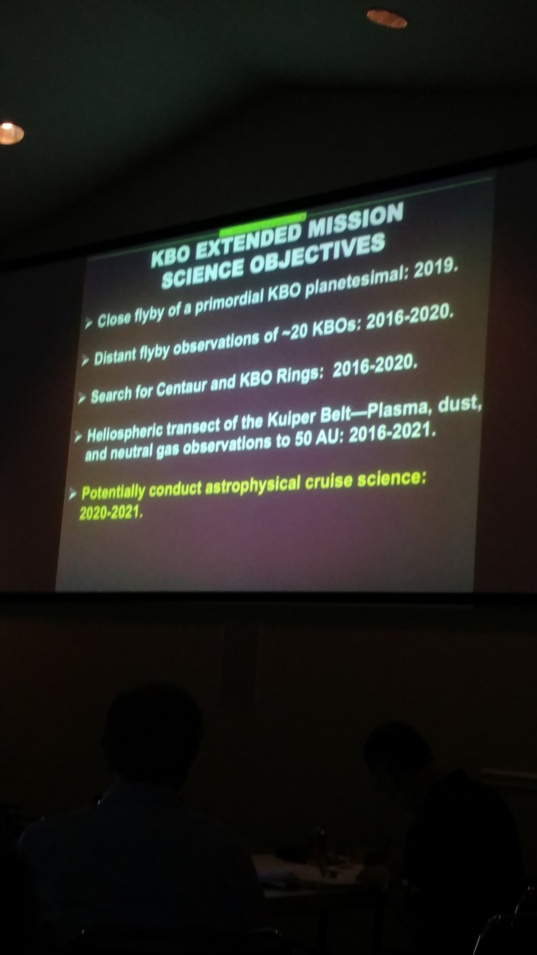 In the coming weeks, the spacecraft will be conducting phase curve studies around Ixion, Quaoar, and 2002_MS4, all large KBOS, and doing a ring search for KBO 1994_JR1 (small but relatively nearby) and Centaurs Chiron and 2010_JJ12. By 2019, it will have studied ~20 KBOs as well as more Centaurs, examining their reflectance at different phase angles, their colors, and looking for rings. 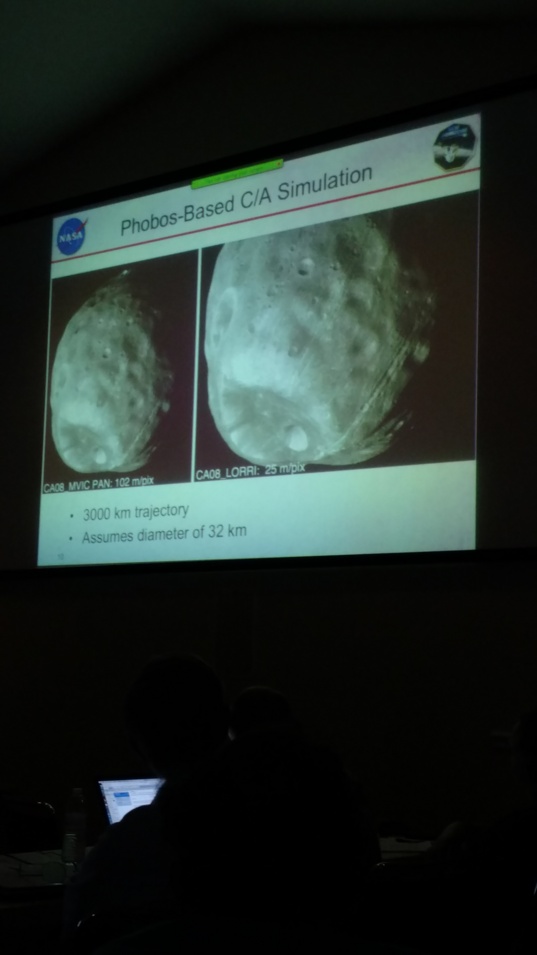 Additionally, work is being done to learn more about the main target, 2014 MU69. By mid 2018, we hope to better pin down its size, as well as determine its color, rotation rate, and at least pin down upper limits on what satellites and/or rings might exist (better yet, we might actually spot said items). Much of this will be done on two upcoming observation campaigns using the Hubble Space Telescope. If occultation observations succeed, pinning down a better size and albedo (surface reflectance) might be determined. To put it another way, we know almost nothing about 2014 MU69, and prior to the flyby we hope to make a slight improvement in how little we know. Once the flyby occurs, we should get views with resolution as good as 25 meters/per pixel on the encounter hemisphere (the resolution of imagery of the other hemisphere depends on the rotation rate).

Fuel and budget margins are tight, so efforts are being made to make the best use of resources. This could potentially lead to the cancellation of some distant KBO/Centaur observations (no one wants to do these at the expense of the close encounter). Conversely, if enough fuel remains, a second close KBO encounter is not impossible (although it would take an incredible amount of luck).

At the end of the morning sessions, the team was treated to a slideshow of Michael Soluri’s photos from the encounter period. It is hard to believe it was a year ago that we all converged to turn the Pluto-Charon system into a real place. We also created a message in a bottle, so to speak, for any future Pluto Orbiter team, with predictions from all of us about what such a mission would be like and what it might find. I hope I live to see it opened.

Lowell Observatory has nightly public observing sessions. They initially thought that they had seen a large spike in attendance thanks to the Pluto flyby. Those gains, however, proved not to be a spike, but a sustained increase which continues to this day. They average about 400 people a night. The enthusiasm of the staff and of the visiting public was exciting to see. After the observatory closed, we had the opportunity to view Pluto through the historic 24 inch Clark refractor. This was the telescope with which the search for Pluto was initiated by Percival Lowell. Two nights after it was found using photographic plates from another telescope at the observatory, Pluto was seen directly by human eyes using this telescope. 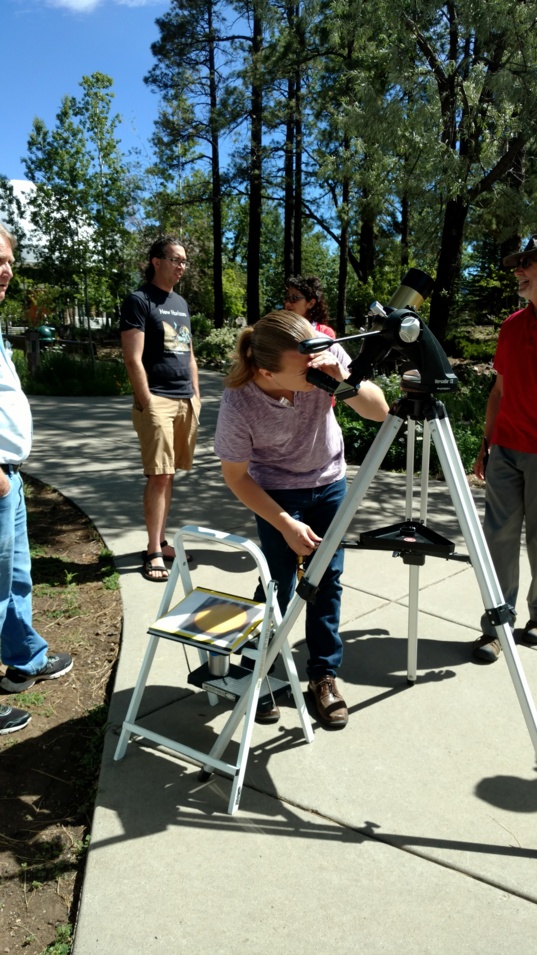 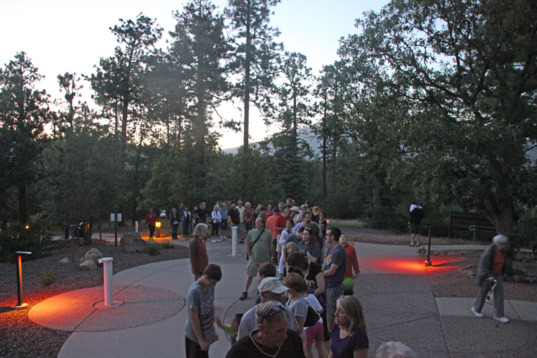 The line to see Saturn during the public viewing at Lowell 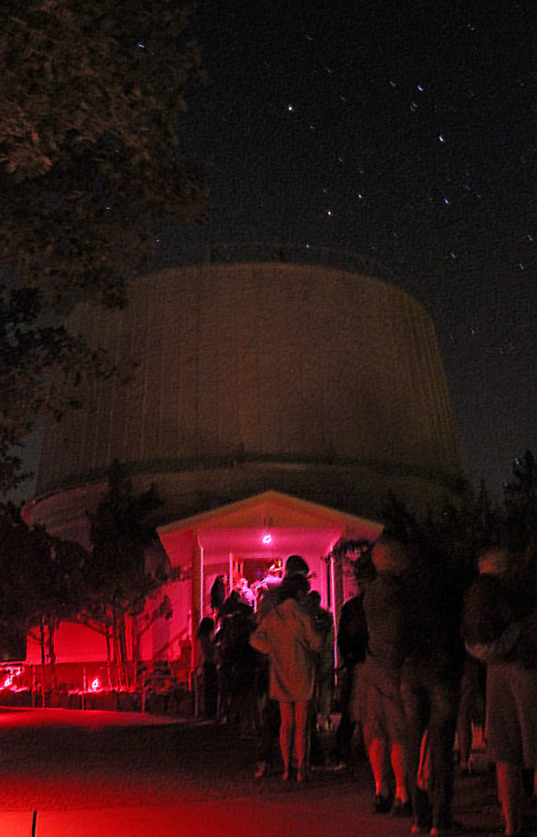 The line to look through the 24" telescope 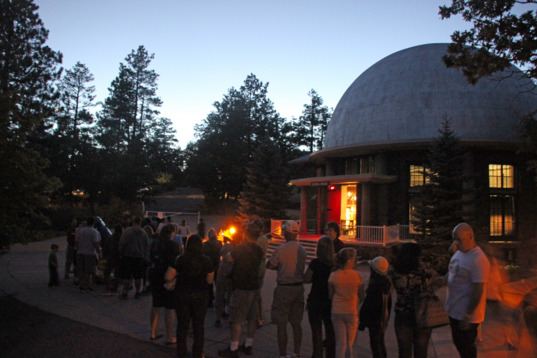 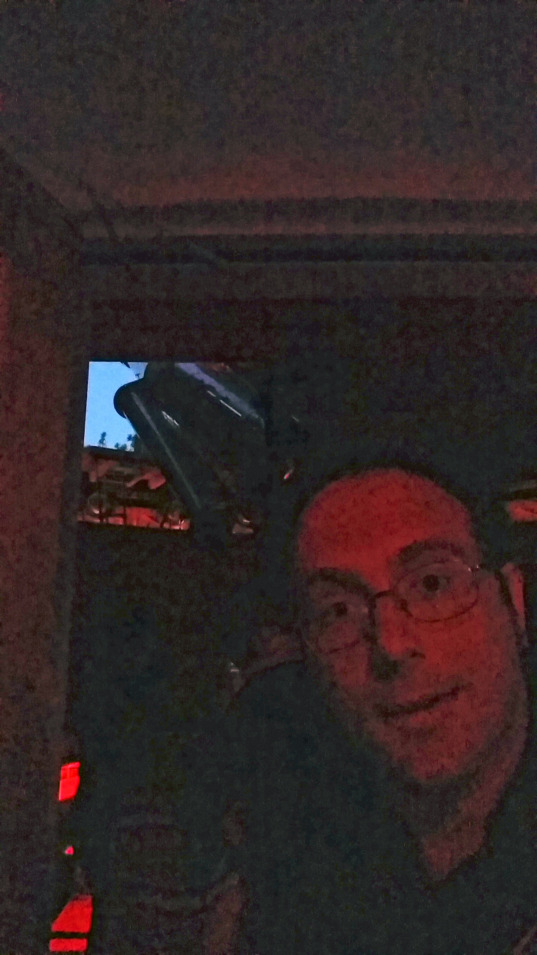 About to look through the Clark Refractor telescope 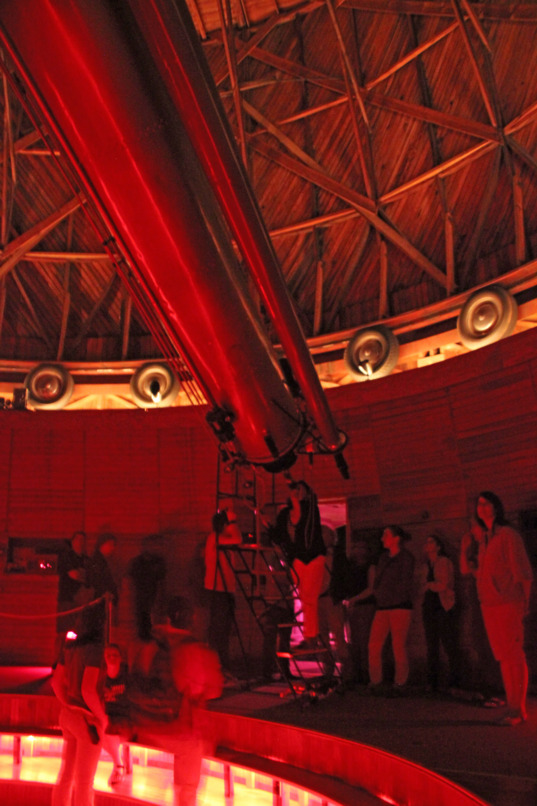 I should add a personal note. This was the second time I’ve seen Pluto in a telescope, the first time being in the 1990s. It appears, of course, like a faint star. But this time it was a world we were looking at – a place that we knew, a place that we have spent the last year studying up close. As a Geology and Geophysics collaborator, I have watched a slow, constant stream of images from the New Horizons CCDs on my monitor. Last night, photons from the sun took the roughly ten hour journey from the sun to reflect off Pluto and enter the telescope and finally my eyes. 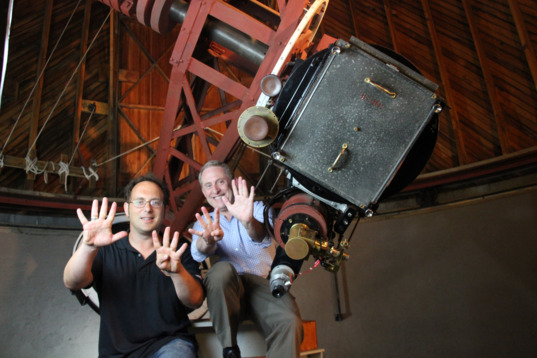 Ted Stryk and Alan Stern give the "Planet 9 salute" beneath the telescope used to discover Pluto at Lowell Observatory.

Pluto is a special place. It marks both the limit of the pre-space age solar system and is the largest world we know of in the “new” solar system that we have since discovered. New Horizons has completed the initial reconnaissance of our solar system we set out to explore and begun to open up the solar system that at the time was purely a matter of theory and conjecture. In the coming years, the mission will continue the nascent work of understanding a new class of worlds.

slightly confused, target object referred to as 2002 mu86, new target? name change, that would be interesting, or maybe just misprint?

A typo obviously. Now as to those 20 KBOs NH is going to observe, what ARE they? when are they going to be observed, and from how far?

I remember back when I suggested that NH might be used to do distant observations of other KBOs (with some rough calculations on how good of a view it could get on others, and at what distances its observations would be better than Hubble's) over on unmannedspaceflight and I was laughed at. ;) The mods even deleted some of my posts as "speculative" and "unrealistic". Well, nice to see that they're *actually* going to do it. Neat idea to see them doing things like centaur observations as well, making use of the distant vantage point. I wonder if my other speculation will come to pass. Which is that once James Webb comes online that they might use it to identify future observation or even further encounter targets. Webb doesn't have a very wide field of view, but it has extreme resolution. Given the relatively narrow swath of sky that NH will pass through and how slowly KB objects move, Webb seems to be the best chance to find new objects near NH's path, and it should be online long before NH hits the Kuiper Cliff. And NH will still have a fair bit of delta-V left over after its next flyby. I know access to Webb's time will be highly in demand, but if they're lucky....