A difficult but necessary decision by ESA and Roskosmos to postpone the launch of the ExoMars rover from 2018 to 2020 raises a question about the fate of other planetary exploration programs in the pipelines of both space agencies. From the beginning, the ExoMars project has been seen as only the first step in a decades-long cooperative effort between Russia and Europe to explore the Solar System. The next logical step after roving Mars in search of biological activity with the ExoMars rover would be to bring Martian samples back to Earth. Analysis in Earth-based laboratories promises to uncover details of the Martian past and present that would be impossible with in-situ experiments.

The technical complexity and high cost of such a mission requires even broader cooperation than the current Russian-European alliance. NASA would certainly have to be involved. However, before such a coalition could be forged, ESA and Roskosmos hoped to make an intermediate step, returning soil samples from the Martian moon Phobos.

Some planetary scientists believe that Phobos might be richly peppered with material thrown from the surface of the Red Planet into its orbit by powerful meteor strikes and then swept by its tiny moon. Thus, studying soil of Phobos might provide a unique glimpse into the history of Mars. In addition to its scientific value, the Phobos mission would also provide experience and technologies needed for sample return from Mars itself. 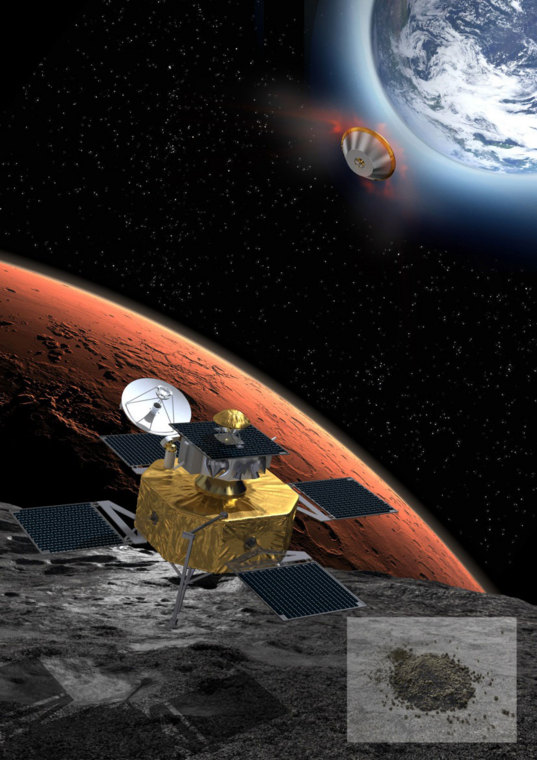 For Russia, the return of samples from Phobos would also mean “lessons learned” after the failure of the Phobos-Grunt mission in 2011. The new joint project is expected to employ much more reliable technology and, hopefully, much better management than that of its ill-fated predecessor.

In the past couple of years, ESA and Roskosmos have conducted joined studies of feasible scenarios for a Phobos sample return mission, which could be launched between 2024 and 2028. The first phase of this work was completed this month, in anticipation of a meeting of European ministers in December, who hold the purse strings of the future ESA budget.

With the mission scenario and budget estimate in hand, ESA hoped to lobby for the first significant investment into the Phobos project. However, with the ExoMars rover requiring urgent extra cash to cover for its two-year delay, the Phobos project had to be taken off the table this year.

“We would not propose this (mission) for development until we have ExoMars on sure footing,” Jorge Vago, the leading expert at ESA’s Directorate of Science and Robotic Exploration, says, “We will keep working on it, but we will not go for a full implementation now.”

Bernardo Patti, Head of ISS Program and Exploration Department, which on January 1, 2016, took over responsibility at ESA for all human and post-ExoMars deep-space missions, confirmed that the next significant budget request for the Phobos mission will only be made at the agency’s ministerial conference in 2019. In the intervening three years, a period that Patti characterized as "Phase A+", the Phobos project would be developed mostly on paper, with only limited technology development. Patti said that under current circumstances it would be very difficult to predict when the Phobos sample return mission could be launched.

Another potential victim of the ExoMars delay could be the Russian-led lunar missions. The Luna-Glob project (a.k.a Luna-25) was to herald Russia’s long-awaited return to lunar exploration with a landing near the northern pole of the Moon. Conceived back in the 1990s, Luna-Glob is currently scheduled for launch in 2019, followed by a lunar orbiter known as Luna-26.

However, the Luna series is being built at NPO Lavochkin, the same company that is the prime contractor for the ExoMars project on the Russian side. Still, the director of the Moscow-based Space Research Institute, IKI, Lev Zeleny insisted on Monday that even after the ExoMars had slipped to 2020, his team still aims to launch Luna-Glob in 2019. Patti echoed Zeleny saying that ESA is so far sticking with the Russian schedule aiming to launch a follow-on Luna-Resurs lander (a.k.a. Luna-27) to the lunar South Pole in 2020. In fact, ESA just released an image of a drill that would be installed on Luna-Resurs to probe for possible ice deposits as deep as two meters below the lunar surface. Built by Italy-based Finmeccanica, the drill would be the primary instrument onboard the Russian lander. 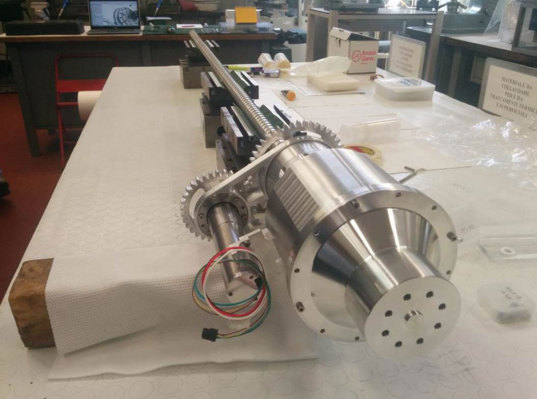 A drill designed to penetrate 1–2 m into the lunar surface is envisaged by ESA to fly to the Moon’s south pole on Russia’s Luna-27 lander in 2020. More information here.

Roskosmos might be able to preserve its lunar exploration schedule thanks to a relatively advanced stage in the development of lunar probes, but, if history is any guide, many things could still go wrong in the next three years to push the launch date beyond that of ExoMars. Unlike missions to Mars, which can be launched only every roughly two years, lunar flights can be easily re-scheduled and, therefore, will likely have lower priority than ExoMars.

On May 16, the official Russian TASS news agency reported that the follow-on Luna-28 sample return mission previously planned for 2024, would be delayed beyond the current Federal Space Program ending in 2025. This is another sign how of far the ExoMars delay is reverberating through Russia’s long-term plans.

Fortunately, another major planetary mission in ESA’s calendar appears to be immune to ExoMars’ domino effect.  The Jupiter Icy moons Explorer, or JUICE, is scheduled for launch in 2022 and arrive at the Solar System’s largest planet in 2030 to study its mysterious icy Moons, Ganymede, Callisto and Europa, which have some potential for harboring life.

“I expect zero impact on JUICE, or for that matter on any of the missions that are part of the Science Program of ESA,” Vago said, “This is a mandatory program to which all countries need to contribute and has a known, yearly budget.”

This is a crucial difference from the funding method used for the Phobos sample return and the ExoMars mission itself, which are parts of the so-called Aurora Exploration Program. The Aurora is an optional program and funded only by interested members of ESA.

Anatoly Zak is the publisher of RussianSpaceWeb.com and the author of Russia in Space: the Past Explained, the Future Explored

I would say, the Russians, no matter what they do, will never ever learn a lesson from the failed Phobos-Grunt space mission, due to their negligence, abuse of power and embezzlement of funds in their part. Accusations of these were voiced in 2013 on a REN-TV documentary about the Russian Academy of Sciences, "Diagnostics of RAN" (https://www.youtube.com/watch?v=sgCunFgFS_c), and by Minister of Education and Science, Dmitry Livanov, especially on the Space Research Institute leasing on a space priced lower than a market value. Nonetheless, the Academy and its institutes survived the government reforms. I think I have to agree with you that the problems must be solved, as it is interesting to note that the Roscosmos agency ceased to exist last year, replaced by a state corporation of the same name. This new corporation will try to revitalize its space industry after all of these embarrasing failures. And ExoMars 2016 TGO is the first to succeed.

Roscosmos is as always dreaming large. Their budget, however, is shrinking, and they've suffered a brain drain for quite a while. Also, annoying that space exploration these days seems to be the "All Mars Channel". :Þ

"Ganymede, Callisto and Europe" ... when did Europe become an icy moon?

@Drew "when did Europe become an icy moon?" Ever been to Iceland in January? ;)