Scientists love names. A great drinking game would be to sit in on a scientific meeting and drink for every acronym, jargon, or technical term you hear (play with milk for unbreakable bones). And while it might seem obvious why doctors call it "influenza" and not "my-back-hurts-and-nose-sniffles-feverishly disease", the need for an atmosphere to be sliced up into the troposphere, stratosphere, mesosphere, and thermosphere may seem less obvious.

I promise that there’s a method to the madness, namely that different zones of the atmosphere differ enormously in their chemical and physical processes. From our viewpoint on Earth, we could reasonably name each part "the first part of the atmosphere", "the second part", and so forth, at which point people would stop whining about how complicated the nomenclature is and then start snarking about how boring the names are. But planetary science gives us a real motivation: once we split things up thematically, then we can start to compare one planet to another and draw analogies of the physics, the chemistry, and even the mathematics of atmospheres. 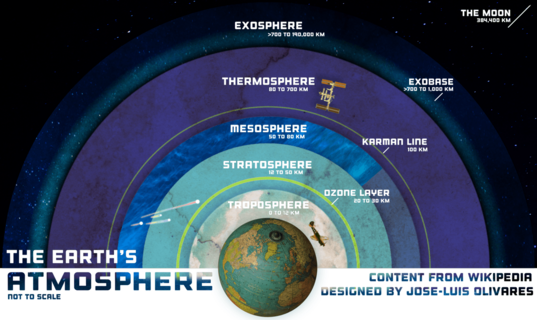 We'll begin on Earth. Unless you’re on an airplane right now, you're almost certainly reading this from a region of the Earth called the troposphere. The troposphere gets its name from tropos or a Greek word for change, and as anyone who’s ever lived through springtime in Chicago can tell you, it does change.

The troposphere's changeable nature in the fact that the troposphere isn’t stable. It’s heated from below by the land, not above: sunlight passes through the atmosphere on its way down with very little interaction, is absorbed by the ground, and then released into the surface atmosphere as thermal radiation. This results in a layer of warmer, less dense air below cooler, dense air above. This air is about as likely to stay put at the surface as a layer of ping pong balls is to stay submerged in a bathtub–it’s not a physically stable system. So, the air rises. As it rises, it expands and cools through a process that is called adiabatic cooling. However, the farther away the air gets from the ground, the colder the ambient air gets. This means that the adiabatic cooling isn’t enough to stabilize the atmosphere. Once the bubble of air starts to rise, it’s always surrounded by air colder than itself and keeps rising, much like the water vapor bubbles in a boiling pot of water. When the rising air gets cold enough, its capacity to hold water decreases enough that the water vapor condenses, forming clouds. 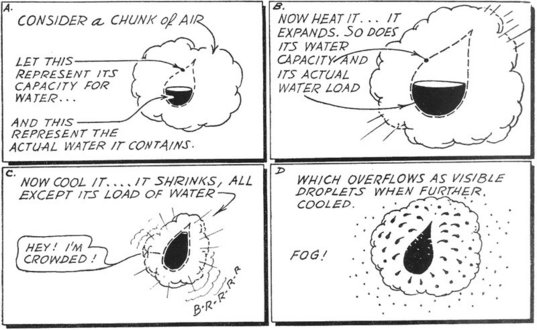 Shortly after the water condenses, the air finds a level of matching buoyancy and stops rising. This is the stratosphere, a zone of low water content where we’ll have none of the weather nonsense that we deal with down at sea level. It's called the stratosphere because it is stably stratified. Planes fly in the lower stratosphere for this reason. There are no storms, but it’s colder: minus forty to fifty degrees on average. (Celsius or Fahrenheit? At this point it doesn’t matter; -40 degrees is the temperature at which both temperature scales are the same.) The air will warm up if you keep rising, however, because the stratosphere, gets warmer the farther you go up. As such, it is stable: the thermodynamic equivalent of setting ping pong balls on top of your bathwater, rather than below it. But what causes heating at the top, something which would solve so many of our weather woes down in the troposphere? We started by saying that sunlight can’t warm the air because air is transparent. This is true for most of the visible wavelength light we receive, but not for ultraviolet wavelengths, which cause ozone formation. Ultraviolet light from the sun splits molecular oxygen (O2) into two oxygen atoms, which can bond with another molecule of oxygen to form ozone (O3). This process releases enough heat so that at the top of the stratosphere, where the air receives the most amount of ultraviolet radiation, the temperature hovers around freezing -- cold by tropospheric standards, but quite warm by local standards. The UV radiation is mostly absorbed in this part of the atmosphere, thankfully, and so doesn’t make it down to the surface where it can have truly deleterious effects on our DNA.

If we keep going up, we reach the mesosphere, where things start to cool down again. Meso- means middle, which gives us an indication of how far we’d have to keep going if we wanted to really leave the planet. I don’t know a whole lot about it, but I’m not alone- it’s too high up for airplanes and weather balloons but too low for spacecraft, meaning it’s not as well studied as other parts of the atmosphere. For this reason, it receives the unfortunate nickname 'ignorosphere'. This is a shame. In the mesosphere, strange and wonderful phenomena like solar-driven atmospheric tides and atomic chemistry become more important than the thermally driven winds we're familiar with. In the mesosphere, metals can ablate from meteorites, noctilucent clouds may form, and electrical discharges called red sprites appear above thunderstorms. The pictures of these latter phenomena are truly breathtaking. 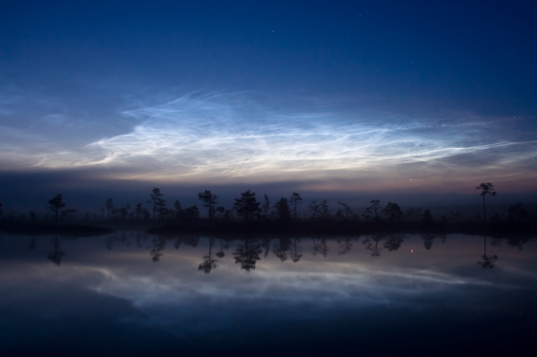 Above the mesosphere lies the thermosphere, where ultraviolet radiation from the Sun ionizes the few remaining molecules, causing temperatures of up to two thousand degrees. (Don’t worry though, as the density is one ten thousandth of what it is at the surface, you’d never feel this as there isn’t enough matter around to transmit the heat.) This region is famous for hosting the Aurora Borealis and Aurora Australis, the northern and southern lights, caused by a plasma ejected from the sun (solar wind) interacting with Earth’s magnetic field.

Above the thermosphere, as a terrestrial atmospheric scientist, I’d call it a day and turn things over to a certified astronomer. The exosphere, the next layer, by its very name (the Greek prefix -exo means outside) seems to suggest that it’s out in space. Even the weather experienced in the exosphere is called space weather, though this doesn’t mean you can turn to the weather channel to get space weather predictions. The last space weather scientist I met did promise that they were working on it, but still a long ways away. [They've been making a lot of progress on this recently though! --Ed.] Also worth mentioning here is the magnetosphere, which contains no atmosphere, but is of fundamental importance to life on Earth, as it protects us from dangerous magnetic storms. 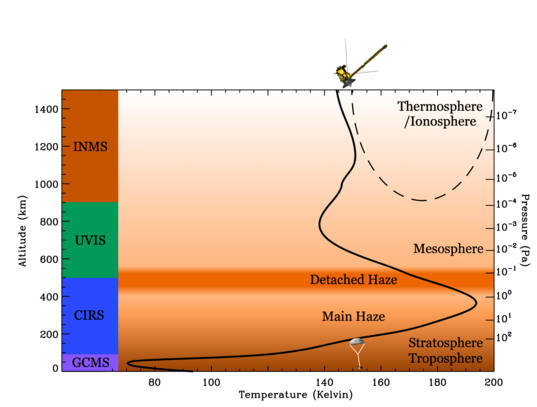 The temperature of Titan's atmosphere

The temperature profile of Titan revealed by Cassini shows a troposphere, stratosphere, and mesosphere. The colors on the left refer to the Cassini instruments that measured each atmospheric layer.

Lastly, even stars have these layers, something I learned after calling stratospheres boring to somebody I met in a bar. She turned out to be an expert on brown dwarf stratospheres (really, what were the odds of that?). Don’t make the same mistake I did! 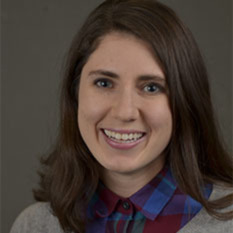 That's a very fun read about the basics, which I'll pass on to several people who think of our atmosphere as 'just a bunch of boring air.' Quite amazing, the things going on within this thin draping, together comparable in relation to the 'thickness of the coat of shellac' on a living room globe (Sagan). The preciousness all this you describe implies. Also congratulations on the bars in whatever area you live; certainly more engaging conversations than in those round here...

I didn't know about the space weather forecasts! That's a pretty sweet site. Clearly I'll have to do a better job fact checking what I hear during the AGU meeting beer hour...