Engineering an Impact on the New Frontier

This article originally appeared on Dante Lauretta's blog and is reposted here with permission.

It was a chilly December morning; I was 10 years old and sitting on the cold, hard floor of my elementary school library...too enthralled and focused on a 20-inch television screen to realize how uncomfortable I was. The TV was showing a live stream of Entry, Decent, and Landing (EDL) activities being commanded by NASA’s Jet Propulsion Laboratory. It was very quiet. And, expecting that at any moment the engineers and scientists on the television would burst into excitement and applause, I wasn’t about to be the first of my classmates to break the silence. We sat there for 45 minutes—what seemed like a lifetime to a group of 5th graders—before my teacher finally got up and turned off the TV. Mrs. Storar, being fluent in space history and blessed with an understanding of mission architecture, gently informed us that something had gone wrong and the Mars Polar Lander would likely never be heard from again. It was an unlikely experience to spur passion and inspiration in a 10-year-old, but from that moment I was completely hooked on space exploration. 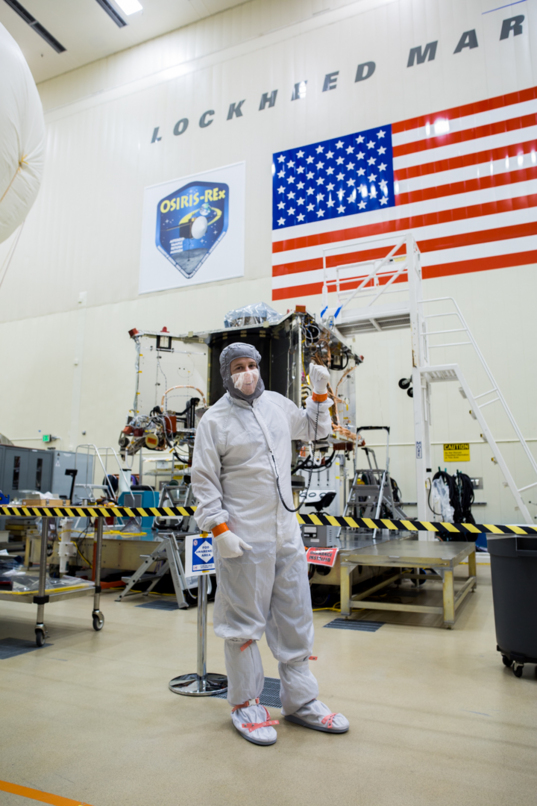 Systems Engineer Bradley Williams with the OSIRIS-REx spacecraft in the Lockheed Martin cleanroom.

My name is Bradley Williams and I am a Systems Engineer for the OSIRIS-REx Camera Suite (OCAMS). OCAMS is a set of three cameras on the OSIRIS-REx spacecraft that will provide the imagery of asteroid Bennu during the OSIRIS-REx mission. Driven by science and innovation, my goal has always been to make an impact in cutting edge space exploration and in the technology that gives us access to explore the truly NEW frontier—space.

I came to the University of Arizona looking for a way I could impact...I mean, leave an impression on the space industry (people in this field don’t like using the word “impact”). While studying mechanical engineering, I also submerged myself in planetary science and eventually gained a minor in the field. In no other field can you take courses taught by Dr. Alfred McEwen, Principal Investigator (PI) of the HiRISE camera onboard the Mars Reconnaissance Orbiter, and get the opportunity to request your own high resolution observations of Mars’ surface to write a paper on. I credit much of my career to the UA Lunar and Planetary Laboratory’s unique ability to provide students with the opportunity to network with space community leaders and ground-breaking innovators. It was an astrobiology course taught by Phoenix Mars Lander PI, Dr. Peter Smith, that opened the door to the path that has led me to where I am today.

Whether it was my persistence or eagerness to get involved, Dr. Smith eventually found me a spot as a research assistant developing CubeSat applications through an electronics test and integration program. During my tenure in the UA’s L-CAVE (Lab of CubeSat Applications and Vehicular Exploration), I had the chance to meet several future members of the OSIRIS-REx OCAMS team. So when NASA awarded the OSIRIS-REx mission to the University of Arizona, things happened fast—and I am talking “rocket escape velocity” fast. In no time, I had transitioned over to the OCAMS team to work on numerous systems engineering tasks for Cat Merrill, the Lead Systems Engineer for OCAMS. The learning curve was steep but it was exhilarating at the same time. 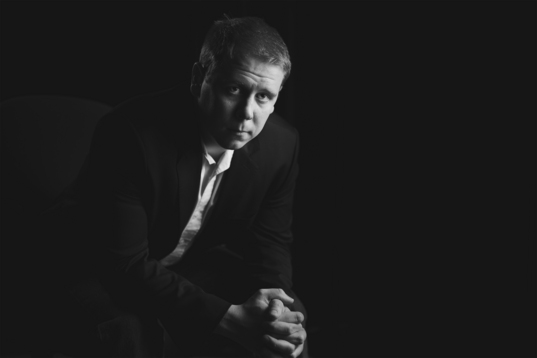 Bradley Williams, who began working on the OCAMS instrument as a University of Arizona student, is now part of the team guiding OCAMS through the ATLO process.

While still a student, my early responsibilities included assisting in the maturation of the Integrated Master Schedule (IMS), and managing the OCAMS requirements. After graduating with my mechanical engineering degree, I was given the opportunity to remain on the project as a full-time engineer. Obviously, I was ecstatic. How many people get the chance to start their career with their dream job, RIGHT? As grateful as I was, my role rapidly evolved. My requirements role quickly turned into the responsibility to design a verification program that could be used to validate the 2,000 mission requirements levied upon the OCAMS instrument, its subsystems, and its components. Once you know how to verify that the right system was built and that it was built correctly, you then have to design an integration and test program. The goal was to incrementally satisfy these requirements while the three OCAMS cameras and control electronics were being built, thus buying down risk that large problems would occur later. This included working with vendors of critical parts, subsystems, and assemblies to ensure that the requirements in the statement of work were verified prior to their delivery to OCAMS.

Again, a unique experience emerged. I was thrown into the OCAMS cleanroom (not literally—you have to properly suit up first to protect the spaceflight hardware from contamination risks) to execute many of the procedures I had authored. From running performance tests in the thermal vacuum chamber to performing functional tests on electronics and cameras after coming off the “vibe table” (and trust me there are no good vibes about it—watching an instrument you’ve spent endless hours and weekends building and perfecting be strapped to a violently shaking table is terrifying). Prior to that, I worked side by side with our mechanical assemblers to verify that our mechanical interfaces met spec before the final torqueing and staking of fasteners. You don’t want to get to the spacecraft and realize that your instrument doesn’t fit the footprint allocated by the spacecraft.

One of the key tests I shepherded through the OCAMS environmental test program was the Electromagnetic Interference and Compatibility test (EMI-EMC for short). I worked with the RF experts at NASA’s Goddard Space Flight Center to identify the proper standardized test setups for our mission, and then conveyed those requirements to the vendor to itemize contract deliverables. Negotiating statements of work may sound dull and exhausting, but you obviously haven’t spent much time in an anechoic chamber. This is where EMI/EMC testing occurs. The chamber is designed to be non-reflective and completely silent to noise, from either external sounds or internal electromagnetic waves (so good luck getting a wifi signal in there). Through our testing, we determined that there were no excessive emissions by the OCAMS instrument, especially in the frequency band that the spacecraft uses to communicate. We also verified that the OCAMS camera performance is not susceptible to any of the emissions we may experience during operations near and around the asteroid Bennu. Recently, I also had the chance to support the same testing but at the vehicle (spacecraft) level. The difference with this test was that all of the payloads (instruments) were on the spacecraft and were actively and concurrently producing science data. This test validated our instrument level results and provided the verification necessary to prove there would be no impact to the launch vehicle (an Atlas V rocket) or the spacecraft during launch activities. 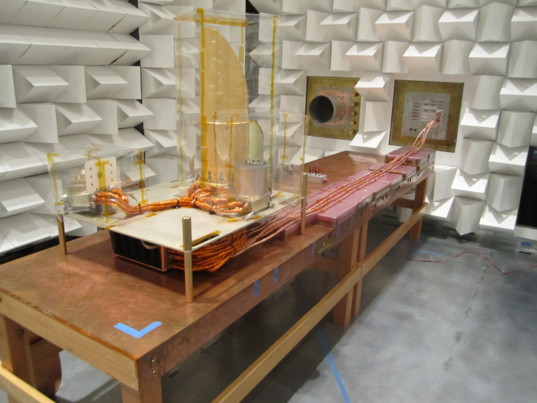 The three cameras of OCAMS sit in an anechoic chamber while undergoing EMI-EMC testing.

Fortunately, after the conclusion of the OCAMS test program and the delivery of the instrument to the spacecraft, I have been able to continue with OCAMS in providing ATLO (spacecraft Assembly Test Launch Operations) support. Being knowledgeable in OCAMS’s functionality and commanding, I work closely with the operations team to define system verification tests that prove out different phases of the mission before launch. This has given me insight into the future decisions that will have to be made during mission science operations to coordinate and balance science value with operational risk.

The OSIRIS-REx mission is awe-inspiring. It pushes the limits of current space exploration efforts and will help shape and guide future generations of scientists and engineers. Like the Phoenix rising from the ashes, my inspiration was derived from previous space endeavors, and I hope to continue this “pay-it-forward” attitude to help inspire this country’s future doers and dreamers. 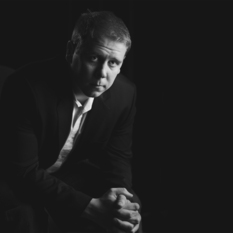