The exact process of how a planetary system forms still plagues astronomers, even for the most well-studied planetary system of all time—our Solar System. At the 47th Division of Planetary Sciences meeting, many presentations touched on some of the most contentious and poorly known aspects of how planets form. What is particularly fascinating is the inherent dichotomy that people studying our Solar System have with astronomers who study planetary systems around other stars: we have a wealth of individual facts and constraints, but for exactly one holistic system. At the same time, astronomers are starting to scratch the surface of what a “typical” planetary system might look like from the thousands of planets discovered by various techniques. So far, the galaxy has shown us that planet formation is pretty ubiquitous, but also much different from our own Solar System. Planetary scientists studying the Solar System are essentially trying to understand how forests grow by looking at the leaves of one tree, while astronomers studying distant exoplanet systems are trying to understand how forests grow by observing every forest on Earth from the Moon. The trick is meeting in the middle—what do other stellar systems tell us about our own, or vice versa?

Photos of a collision experiment by Johannes Deckers. The small projectile shatters when it collides with the target, but leaves a small amount of mass behind. This kind of result must be incorporated into models of asteroid and planet growth.

At the heart of planet formation is how little bitty dust grains turn into massive planets that gravitationally sculpt their surroundings. It turns out that we’re not entirely sure how that works. For a long time there’s been the problem of getting objects to grow from roughly centimeter-sized grains all the way to kilometer-sized objects. Nature clearly doesn’t have a problem with this, but our understanding of this process in zero gravity within a protoplanetary disk is still quite primitive. One way to get around that is to conduct collision experiments between dust grains and to see how that might change our understanding of planet formation. This was the focus of two interesting talks that try to quantify how this process works, which have clear implications for the assumptions other researchers use to model dust grain formation. A critical question is how efficient collisions are at growing or destroying dust grains. Johannes Deckers presented work on ice and dust grain collisions under gravity in the lab. He found that for intermediate collision velocities, the efficiency with which fairly large grains retained matter from a collision depended on the properties of the grain and the angle of the impact. The nice result was that this information could be directly plugged into dust accretion models to provide a more realistic result. Sabrina Gaertner took these investigations one step further with slower collision speeds, but in microgravity and at really cold temperatures (from 80-200 K). Her results also suggested that previous assumptions in coagulation models would need to be revised, primarily because she found that grains may bounce with energies that don’t follow any particular pattern, but they would follow some sort of probabilistic range. Both of these subtle effects could have significant implications for the microphysics of how dust grows from small to big.

One common problem in many models of the Solar System is that simulations of planet formation in the inner Solar System tend to predict a Mars that is much more massive than the real Mars. Two different solutions to this “small Mars problem” were proposed at DPS. First, Hal Levison showed his results from simulations of terrestrial planets formation using a model called LIPAD, which includes the effects of gas drag and fragmenting collisions on the growth of planetary embryos. In the LIPAD simulations, an initial belt of planetesimals between 0.7 and 1.0 AU forms into an Earth and a Mars, but the simulated Mars is scattered out of this belt, starving it of planetesimals and resulting in a smaller, more realistic Mars. Later in the week, Thomas Barclay discussed an alternate solution to the small Mars problem. He ran 300 simulations of the dynamics of planetesimals and planetary embryos in the inner Solar System. These simulations are very chaotic, so changing the initial position of even one planetesimal can result in a totally different final Solar System. He found that 13% of the simulations produced a Mars-sized planet at Mars’ current orbit, indicating that it’s not impossible to produce a small Mars in the Solar System, just rather unlikely. The real Mars might have simply beaten the odds and remained small.

The formation of the moons of Earth and Mars is also an ongoing problem in planetary science. For example, Earth’s Moon has a much lower percentage of volatile elements in its surface than the Earth, which any model of the Moon’s formation must explain. Sebastian Charnoz presented a detailed simulation of the protolunar disk around the Earth, which formed from the debris of a giant impact with the Earth and then formed into the Moon. The disk is composed of both gas and condensed liquid, which interact with the growing Moon in different ways, pushing the Moon away from the volatiles in the disk as it forms and producing a volatile-poor Moon. Robin Canup then proposed a slightly different solution to the same problem, showing that the Moon may have accreted its outer layers from the inner part of the protolunar disk during the time when the volatiles in this inner region had not yet condensed. This model implies that the inner ~40% of the Moon may actually be volatile-rich, but we have only measured the composition of the volatile-poor surface of the Moon. Pascal Rosenblatt wrapped up the mini-session on moon formation by presenting a dynamical simulation of the formation of Mars’ moons, Phobos and Deimos. He showed that Phobos and Deimos’ current masses and orbits could be explained by a larger third Martian moon, which triggered the accretion of debris onto Phobos and Deimos and then crashed into Mars.

Several talks at DPS discussed studying asteroids to tease out information about the formation history of the Solar System. For example, Diego Turrini explained that as Jupiter reached the stage of growth where it was rapidly accreting gas, its increasing gravity violently excited the planetesimals nearby, sandblasting their surfaces and throwing water and other volatile elements into the inner Solar System. Jupiter’s migration enhanced this bombardment, leaving a kind of record of its evolution on the asteroids. For example, the amount of water measured on the asteroid Vesta indicates that Jupiter must have migrated about a quarter of an AU. Too much farther than that, and Vesta would be less massive. If Jupiter hadn’t migrated at all, we would see much more water on Vesta. 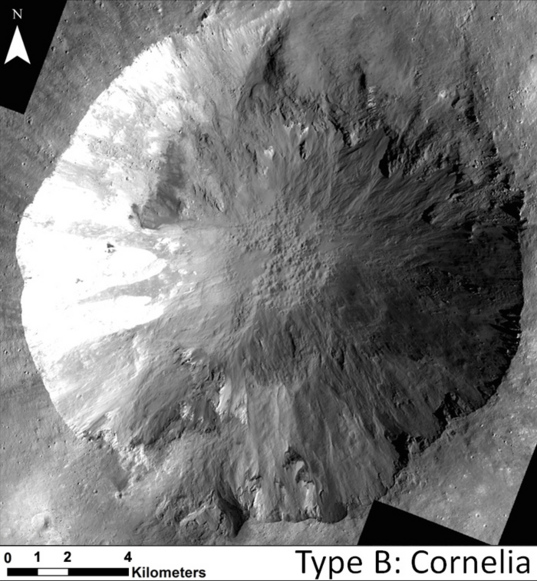 Cornelia crater on Vesta, taken by NASA’s Dawn mission. The long, narrow gullies in the crater indicate the presence of water, which in turn can help constrain the history of Jupiter’s orbital migration.

Similarly, Michael Poston showed that the composition of Jupiter's Trojan asteroids can provide evidence for Jupiter’s migration. The measured colors of the Trojans look a lot like Kuiper Belt objects (KBOs), which may have formed around the hydrogen sulfide sublimation line, the distance from the Sun where hydrogen sulfide freezes. The only difference between Trojan and KBO colors is that the KBOs are redder. Poston suggests that the Trojans moved inwards from this distance after they formed, and space weathering caused their surfaces to become less red. He showed results from laboratory experiments demonstrating that sulfur becomes less red as it is heated, supporting the idea that the Trojans moved towards the Sun from where they formed, probably due to Jupiter’s migration. 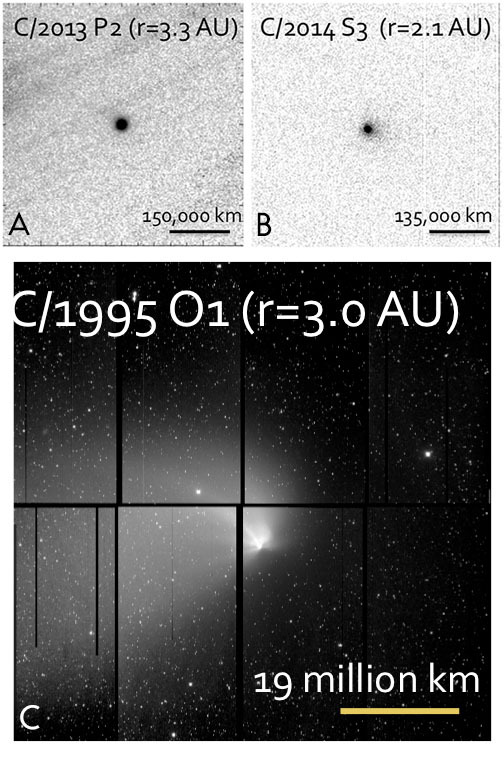 Objects from the Oort Cloud

Two tailless “Manx” comets, C/2013 P2 (left) and C/2014 S3 (center), taken with the Gemini North 8-meter telescope and the Canada-France-Hawaii Telescope, respectively. Compare with the bright tail in the image of comet Hale-Bopp (right), taken at roughly the same distance. The Manx comets could be composed of fresh Earth-building material from the inner Solar System, preserved in the distant Oort cloud.

While migration models of the Solar System predict that material from the outer Solar System moved inwards, they also predict that asteroids from the inner Solar System were thrown outwards towards the Oort Cloud. Karen Meech presented some intriguing observations of comets on highly eccentric orbits that don’t show the typical cometary “tail.” Meech calls these objects “Manx” comets, after the tailless cats, and explained that the lack of tails indicates that these comets are composed of material from the inner Solar System that has been “preserved” in the Oort Cloud after being scattered there by the migration of giant planets. Studying these Manx comets further will help us understand the details of giant planet migration, as well as providing us with time capsules of Earth-building material from the time when Earth was forming. 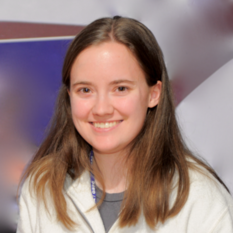 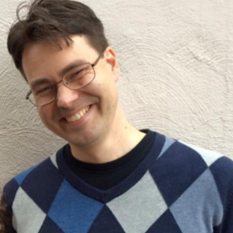 There are a couple of things that I have not seen incorporated into planetary formation models. The first is the assumption that the object at the center of a forming solar system becomes the star. It seems possible that nearby systems and gravitational waves could altar and divert material to a secondary large body making that the star. As the secondary body grows the center of the solar system changes and puts the early protoplanets into odd eccentric orbits. It could also account for the problems with material distribution.

The second thing is explaining how you end up with such high amounts of hydrogen at the center in the star and further out as gas giants with the rocky material in its own section. Conventional disc formation models make it seem as if the gas and dust material is neatly divided up into bands. One would think the distribution would be more mixed and chaotic, but if it were then all planets and the star would have material more evenly distributed. I apologize if this isn't clear but this comment form is not very compatible with mobile Apple devices.