While Pluto deservedly stole the headlines last week, Chris Russell’s Dawn update at the Exploration Science Forum at NASA Ames reminded us that the other dwarf planets are also sharing their secrets with eager scientists.  As an eager scientist unaffiliated with the Dawn mission, I’m happy to share what I heard!

Russell’s update began with some relatively mundane results: Ceres’ North Pole is pointing in a different direction than ground-based measurements suggested, leading to slightly different lighting conditions than they were anticipating. Ceres is also a bit smaller than they were expecting, which leads to a slightly larger density. Again, nothing terribly newsworthy.

However, Russell then began to discuss the surface features on Ceres, and things rapidly became much less mundane. He suggested that the distribution of bright spots on Ceres didn’t look like they were consistent with impacts. This was a bit hard to understand, particularly since I was still trying to work through the North Pole results, but I took it to mean that while there were many bright spots across the surface, the relative numbers of large versus small ones don’t look like what we’d expect if they were all simply craters.  However, it may also have been a statement about the distribution of these bright spots across the surface in terms of latitude or longitude. 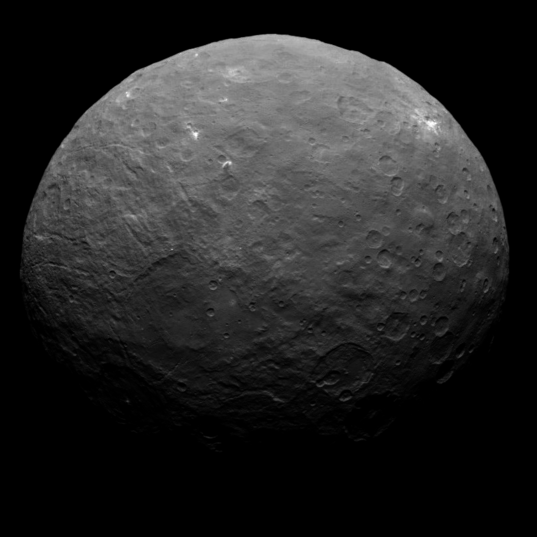 He then focused on the most famous complex of bright spots, in Occator crater. This group is also known as “Spot 5” from earlier Hubble Space Telescope observations.  Russell said that a “haze” was visible in this crater at certain times of day, and that it was seen more than once. A follow-up question, the only one there was time for, established that the haze was confined to the crater itself. 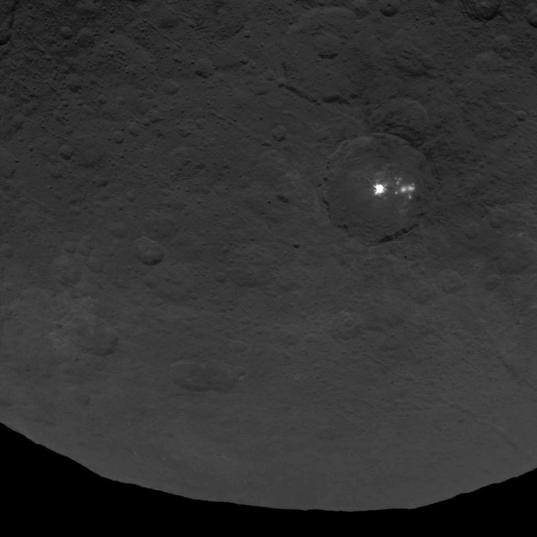 A cluster of mysterious bright spots on dwarf planet Ceres can be seen in this image, taken by Dawn from an altitude of 4,400 kilometers. The image, with a resolution of 410 meters per pixel, was taken on June 9, 2015.

There are a lot of exciting possibilities as to what this means, though the Dawn project itself will need to clarify exactly what was observed.  One could easily interpret the bright spots as ice (as many have done in past months), and imagine that what was seen can be associated with the water vapor signature seen by the Herschel spacecraft.  However, “haze” usually implies a particulate component, and the team itself seemed to be favoring a non-ice composition for the bright spots in recent weeks. A “haze” rather than a “plume” or “jet” also suggests material is sticking around, which is difficult to imagine (though Ceres’ relatively large gravity may help in that regard).

Finally, I’ll note a possible connection to a similar claim made by the Framing Camera team at this past LPSC: They saw Spot 5 from beyond the limb of Ceres, which they argued meant it was elevated. However, I haven’t heard this claim again and it’s possible that an updated shape model would show a sight line to the surface.

Given the importance of Russell’s announcement of what amounts to a transient, localized atmosphere on Ceres, I would expect a more official account to emerge before long! 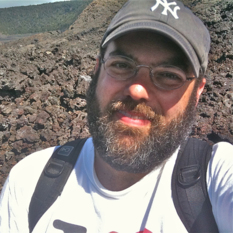 I wonder if this could possiblty indicate some geologic activity.

For a while now I had dismissed the ideas of plumes or cryovulcanism, on the grounds that there was no accepted mechanism for retaining geologic activity on such a small body so long. But after seeing Pluto…

The Twitter user @snnaka has posted an image, is that for real?

Snnaka's image isn't a photograph - it's a 3D rendition of existing imagery.

Thanks for that ToSeek, the vertical seemed whack and the haze bizarre. Hats off to NASA the Movie.

Does playing with contrast settings on the image show light closers to us? e.g. would this show that the white areas are on higher ground? I am a complete layperson, so I'm justing going on gut instinct in jpegs. What are your thoughts? Please be gentle ;-) http://goo.gl/eiVrXh

If you look at the Rotation Movie released Feb 19, 2015 (http://www.planetary.org/multimedia/space-images/small-bodies/ceres-20150219-animation.html) in frame 5 the main "Spot 5 " complex sure does seem to be above the surrounding terrain (as it is in the Sun, while the surrounding terrain is dark). I got an estimate of an altitude of a few 100 meters assuming that each image had a fixed time between it.

The bright spots are not necessarily elevated. They are so much brighter than the surrounding soil they reflect the very dim light on the edge of the terminator and so remain lighted when the camera's sensor bottoms out for the rest of that area. The bright spots are still within the disk of the round body facing the camera when they are visible but the crater is dark. Two other questions I have are; when are they going to take a photo that is underexposed for most of Ceres but properly exposed for the bright spots. They are so much brighter, it just pegs the sensor. And do the different candidate materials that reflect that brightly have a distinctly different reflectivity that can be ascertained one the camera sensor is not saturated. i.e. by knowing the photo's exposure time and distance to the sun you can get a good number for that material's albedo. Is salt and ice different enough to tell them apart. Assuming they are not dirty in some way, which would complicate things, but again, getting a good albedo might be able to tell since it would then be less than pure salt or ice

Just a far off thought that the article in mention was indeed of something artificial, an artifact, from beyond our civilization. More so likely no and easy to disprove no, but what if it were. What effect would it have in our own world.

about a month ago i was able to focus my settings of my computer to enhance those spots. i showed my friends . . . you could see structures around the edges of the light . . . quite large and architectural in shapes i said it looks like a fog . . . you can see a source light in the smaller spots that appears to glow from an inner source perhaps . . . . fun to speculate.

I sent an email to the Dawn mission pr lady with the question: do the bright spots extinguish when the crater is not facing the sun, or dothey remain lit up even when that side of Ceres is dark. To her credit she did reply and stated the lights dim. But did not say they completely extinguish. It looked to me that even when the rest of the surface is completely dark the bright spots persist. But that is apparently because the pictures released are composites. I think you can see where I am going here. Any thoughts?

Tom Bunce is correct about the spots being so much brighter than the background terrain that they seem to "glow in the dark" but actually it's just a contrast effect under low lighting conditions. I am pretty sure that they have taken images with exposures that do not overexpose the spots; the problem is that the JPEG format does not have the bit depth to show us detail in the spots *and* detail in the dark areas. There is a similar problem with looking at images of Iapetus. When the data are archived as FITS files they will have 16 bits and you will be able to stretch it to your heart's content. For those of you enhancing images and seeing structures: you are seeing JPEG compression artifacts (Google that for an explanation).

re compression artifacts . . . fully understood . . . i have a trained eye . . . that said i would love to show what i got as an image and let time tell the rest. where does one show images? hey i'm an open minded skeptic

Would anyone care to comment on this photo of Ceres? https://www.nasa.gov/sites/default/files/thumbnails/image/pia19312.jpg. Image Credit: NASA/JPL-Caltech/UCLA/MPS/DLR/IDA "This image of Ceres was taken by the Dawn spacecraft on March 1, just a few days before the mission achieved orbit around the previously unexplored world. The image shows Ceres as a crescent, mostly in shadow because the spacecraft's trajectory put it on a side of Ceres that faces away from the sun until mid-April. When Dawn emerges from Ceres' dark side, it will deliver ever-sharper images as it spirals to lower orbits around the planet." https://www.nasa.gov/content/ceres-seen-from-nasas-dawn-spacecraft My question is, "Where are all the stars?" Nothing but inky black, giving no impression of a Universe replete with stars. I wonder why we are never able to see stars while exploring Space?

I have observed every available photos on Ceres. On the latest Occator photo , I've noticed something strange about it. Its geological features are fresher and sharper in focus relative to the surrounding old craters and bulges. It seems that the giant crater was actually formed by a single asteroid plunging into the area.. What we are seeing now is perhaps the aftermath of a long period of self-crusting over a large crater. The density of the crust materials is lighter than the salt water mantle of Ceres. The impact crater debris was re-surfaced and resealed quickly at the exposed hole. Only smaller exposed spots remain till this day. We can see many fresh terrain folds inside the crater pit, especially near the circumference. Strong surface tension of the mantle keeps debris floating on top. The big spots are showing a lot of crusting structures forming around the edge. The general area of the light spots also seems brighter than other parts of the basin. The newly formed crust must be relatively thin. It is possible that the light spots material represents some kind of molten magnesium silicate compounds that are heated at 1900 C near the core.The surface temperature of Ceres is cooling off the openings constantly so infrared image cannot detect big temperature variation. A recent close-up IR image has shown bright area along the rim of many craters. This means the mantle material is right beneath the cracks.

After my exhaustive search of all possible magnesium silicate minerals, there is a very high probability that the crusting material is actually sepiolite (Meerschaum). It is a very porous and soft mineral that can float on water. It also can stick together like soapy clay and harden quickly under hot and dry condition. The color and texture also matches the surface of Ceres. If this is true, the core of Ceres should be around 2000C and molten magnesium silicate reacts with salt water to generate hydrated form of the substance. Some of the soapy clay porous mineral harden by the core and floats toward the surface and slowly seal up the rest of the exposed spots. This process may take several years or even decades depending on the crater size. One other point, magnesium silicate can exist in fiber form and can used as a heat insulation material similar to asbestos. It will create an illusion that Ceres surface appears cooler than its interior.

The guessing game is fun for citizen scientist like myself. My thoughts are to stick with what I wrote up at www.LakeCeres.com - it still seems valid.