The One Earth Message Project is going to send a message to the stars, and we invite members of the Planetary Society to join us in this historic endeavor. Following its July, 2015 encounter with Pluto, the New Horizons spacecraft will become the fifth human-made object to leave the solar system. The first four – Pioneers 11 & 12, Voyagers 1 & 2 – all carried messages from Earth for any extraterrestrial space travelers who might someday happen upon our vessels. New Horizons was launched in 2006 without such a message, but it's not too late to add one. Our message will be stored aboard New Horizons' computer following the completion of its active mission, where it may survive for as long as a million years. 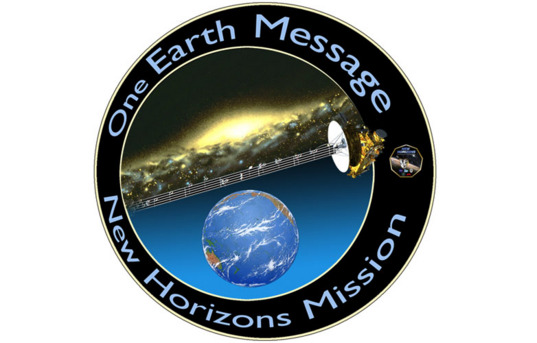 The Pioneer Plaques and Voyager Golden Records were created under the leadership of Planetary Society co-founder Carl Sagan. The Design Director for the Voyager Record was renowned artist and frequent Sagan collaborator, Jon Lomberg (who also designed the original Planetary Society logo), and Jon now serves as Project Director for One Earth Message. Jon came up with the idea in 2013, quickly won the support of New Horizons Principal Investigator, Dr. Alan Stern, and recruited a worldwide Board of Advisors to help make it happen.

Unlike the Voyager Record, which was created by a small, select team, the New Horizons Message will be crowd-sourced to the world. Anyone with a good idea for a picture, musical selection, or other content, can submit their proposal. The submissions will be archived online where the world can view and then vote on them. Who speaks for Earth? Everyone will!

What will the Message be like? Frankly, we don't know yet, but finding out will be fascinating. This "selfie" of our planet in the early twenty-first century should communicate to ET something about who launched the spacecraft, what our planet is like, and what other lifeforms share it with us. Our Board of Advisors includes scientists, artists, musicians, writers, journalists, educators, and a US Federal judge, and we have already engaged in some spirited debates over what to send and how to present ourselves. And who knows what will emerge from crowd-sourcing the content to seven billion people? 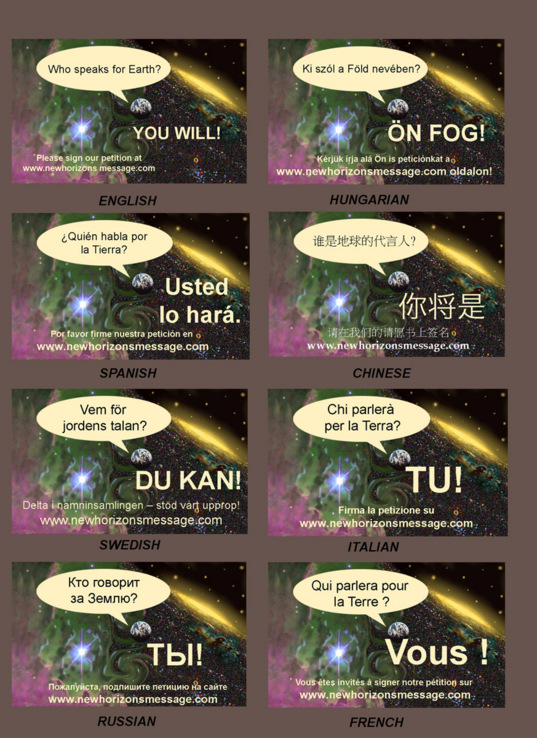 Who speaks for Earth?

We already know that the Message Project has engaged the interest and support of people around the world. Our online petition urging NASA to approve the project quickly collected more than 10,000 signatures from over 140 different countries. But while NASA has offered encouragement, funding for the Message will be entirely private. To learn more, please visit our website at OneEarthMessage.org.

This truly is a once-in-a-lifetime opportunity – no spacefaring nation currently has plans for another mission that will go interstellar. New Horizons may be the last spacecraft to leave the solar system in this century. And while the chances that ET will actually find our spacecraft are, well, remote, this will be a message to the Earth, as well as from it. The very act of creating the Message will be a powerful reminder that, for all our differences, we all share the same heritage and future on this small but special planet.

We cannot speak to the stars as individuals, or even as nations – only as a planet. And who better to join us in this endeavor than members of the Planetary Society? We welcome you aboard and look forward to your contribution to this unique and important enterprise. 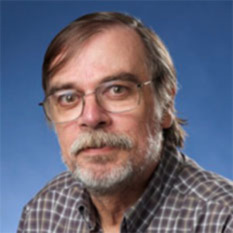 This is a fascinating and exciting project. I would love to understand and see if we are looking not only languages but other forms of communication such as numbers. I can't wait to see how this project turns out.

I can't quite figure out where you want our suggestions as to what to include, but here's mine: Beethoven's 9th Symphony. It ennunciates our aspirations ("all will be brothers"), our proclivity to conflict ("like a hero to war"), the belief most earthlings have in a higher power ("beautiful spark of divinity"), and is one of the greatest works of music ever written. That a human mind and human heart can create that, it should awe any extraterrestrial who hears it.

@ Laura -- OneEarthMessage.org has the details. Click on the graphic with the price listed. It'll open a window for you and just follow the fields.