The Lunar Chronology: What Happens When Science Does Its Thing

Three years ago, I started a project to replicate work done by various groups in the 1970s and 1980s. When the project was completed, the result implied that much of what we think we know about when events happened in the solar system were wrong, needing to be shifted by up to 1 billion years. I presented this in a talk at the recent Lunar and Planetary Science Conference at 8:30 AM, when most people were learning about the latest results from Ceres.

The project started simply enough: I downloaded some of the amazing images taken by NASA's Lunar Reconnaissance Orbiter's Wide-Angle Camera (WAC) that showed the Apollo and Luna landing sites. Then, I identified and measured the craters (my dissertation work included creating a massive global crater database of Mars, numbering about 640,000 craters). 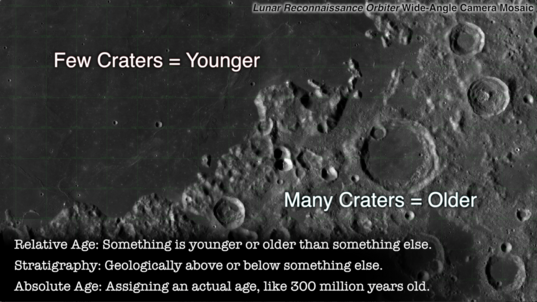 How to use craters to understand ages

Basic principle behind this work.

If we want to use craters for an absolute timeline - as in, actually put numbers on it - then we need some way to tie it to real ages. This was made possible only by the United States' Apollo and the USSR's Luna missions that returned rocks from the moon that could be radiometrically dated in labs on Earth.

With these radiometric ages, we then identify the craters on the surface those rocks were gathered and say that a surface with that many craters per unit area is that old.

That's the lunar crater chronology: The spatial density of craters larger than a standard size versus radiometric age (we use 1 km as that standard size). This crater chronology is then scaled and used as a basis for the chronology across the rest of the solar system. When you hear someone say that something on the surface of Mars is X number of years old, chances are that's based on the lunar samples from the 1960s and 70s and the crater counting done 40 years ago. 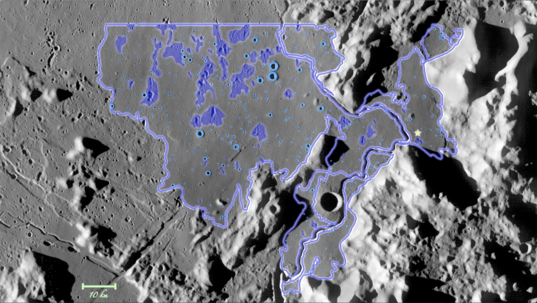 Example landing site area, Apollo 15 (yellow star). Blue outlined areas indicate regions on which craters were identified, blue shaded areas were removed because they are a different type of impact crater, and blue circles are the craters mapped and measured.

And, that's where my project came in. While the rock samples have continued to be analyzed over the decades, the craters were not. It's easy to assume that the researchers back then did a great job, but by the same token, science is about replication and re-testing and we have developed new ways of doing things in the crater community since the Apollo era. A simple example is that the crater chronology requires a spatial density, and therefore you need to know the area of the surface on which you have identified craters. Over the past 40 years, we have better understood the shape of the moon and now have computers to allow for much more precise area calculations. This can result in changes by 10s of percent in some cases.

When I had finished my reanalysis, my results differed for many of the landing sites, in some cases by a factor of 2 from what the standard is in the field. I was surprised. I checked my work and couldn't find any mistakes. So, I combed through the literature and looked to see what other people had published. I ended up finding a range of values, and only in one case was my result at the extreme low or high of all the published results. I showed my work to colleagues and none of them could find any issue with it. So, eventually I published it, early last year. 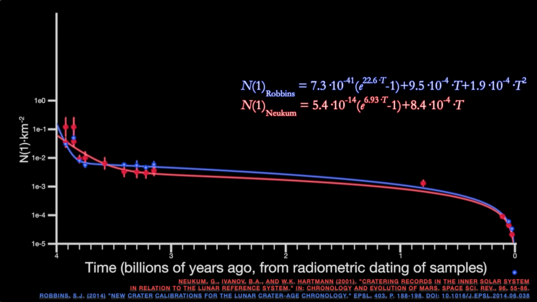 The new (blue) and old (red) chronologies and the data used to fit the model. The vertical axis shows the spatial density of impact craters larger than or equal to 1 km in diameter, and the horizontal axis shows the age of the surface from radiometric dating of collected rock samples. 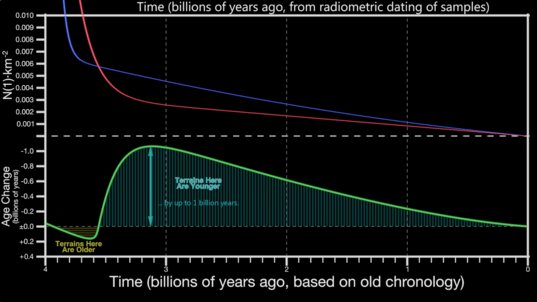 Differences between the lunar crater chronologies

The new and old chronologies in blue and red (top), and the difference between them in terms of model surface age.

There are a lot of implications for this. One is that volcanism on the terrestrial planets may have extended to more recent times. This would imply that the planets' cores stayed warmer longer. Another implication is that the large reservoirs of water thought to exist around 3 billion years ago may have existed for another 500 million years, with implications then for favorable environments for life.

But, something that I added near the end of my LPSC talk was the question, "Am I right?" The answer is an unsatisfying, "I don't know." I of course would not have published it if I thought I was wrong. But by the same token, this type of science is not about one person being right and another being wrong. It's about developing a model to fit the data and for that model to be successively improved as it gets incrementally closer to explaining reality.

And, there are ways to improve the lunar chronology. One that I'm a big advocate of is more lunar exploration: We need more data, more samples gathered from known locations on the moon's surface. We can then date those samples - either in situ or in labs on Earth - and along with crater measurements add more tie points to the lunar crater chronology function. Right now, there is a glaring gap in the sample collection, one that spans 2 to 3 billion years of lunar history. A single point in there could help differentiate between my model and the classic model. And more data would be even better.

Until we land robotic missions to send back samples from other planets or that can date samples there, the moon is still our key to ages across the solar system. 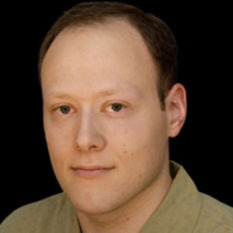 Would the Chinese missions be able to do these kinds of missions?

This looks like a LOT of work, well done! The caption to the Apollo 15 image mentions a 'different type' of impact crater that was not counted. Could you elaborate on why these were excluded?

Impressive work! One question that comes to mind is why there appears to be no new crater count for the data point at 800 million years ago. Could you comment on that?

Jonathan: Any country/group that sends a probe that returns rock samples to Earth (or has equipment that can date the rocks while on the moon) could contribute. China certainly could, Russia could, the US could ... etc. Charleski: Thanks. When I originally submitted this post, I had included a link to a YouTube movie that I had just finished making that explains this work in more detail. I do discuss the "other type" of crater there, but it looks like the video was stripped out. If they leave it in this comment, see: https://www.youtube.com/watch?v=m4WHx8MMXBw They're called "secondary craters" and they form from the ejecta of an extraplanetary impactor. As such, they do not represent the asteroid/comet impacts on the moon and need to be removed. They tend to look different from primary craters, appearing in clusters, elongated, and just generally not randomly placed and circular. Piotr: Thanks. The extra data point in the old work is from Copernicus crater. Copernicus was not visited. The samples some people think we have are from a ray of material from Copernicus that they think was sampled by the Apollo 12 astronauts when they landed about 450 km away. Because of this potential ambiguity, and because Copernicus has always been an outlier on the crater chronology curve, I left it out of my work.