This article originally appeared on Paul Schenk's blog and is reposted here with permission.

Although we are still along way from understanding this fascinating little body, Ceres is finally becoming a real planet with recognizable features! And that's kinda cool. The now-released images from February show features roughly 4 kilometers across, including numerous well-preserved impact craters. These are distinct and clearly show central peaks superficially similar to what we observe on Dione and Tethys. They appear to be about as deep as expected, but measurements of their depths will be done on higher resolution data. Some circular features look rather like flattened craters, but again as to origins (whether relaxed by deformation of ice or by erosion or infilling), caution is in order as we are often fooled at these low resolutions. 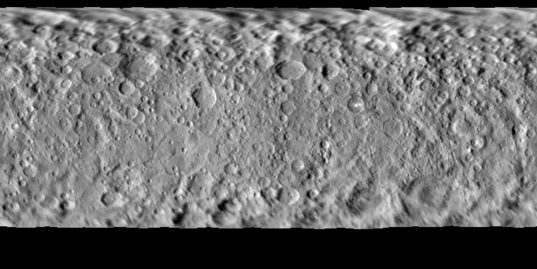 Global map of Ceres at 4 km/pixel (this is my version of the map that was released on March 2, and is NOT an official map product).

So, Ceres has impact craters, some of which could be modified by geologic processes. It might also have some tectonic features, though it is still too early to be sure of their extent, age, or importance. It even has those enigmatic bright spots (sorry no speculations at this point!), which hint at the possibility of more water-ice related features at higher resolution. All in all, though, it is nice to finally have a sense of Ceres as a body, even if that view is rather fuzzy at the moment. This bodes very well for the approaching mapping campaign.

Although there are still suggestions of linear features in the new images, our experience with similar-sized icy worlds orbiting Saturn is that only the most dramatic canyons are readily apparent at the current resolution. Tectonic features like simple fault scarps or cracks won't be obvious at Ceres until April (we have spent most of March on the dark side of Ceres at some distance thrusting the ion engines in order to achieve our first mapping orbit on April 22). Indeed, many of Tethys' smaller-scale fractures require resolutions down to 100 meters, which we won't see at Ceres till this summer. It is likely that Ceres may not betray many of its most interesting ice-related features till we get down to our formal mapping altitudes where resolutions will be a kilometer or less.

The most intriguing linear features are arcuate grooves radiating from a large southern impact basin roughly 250 kilometers across. Although these could be tectonic, the arcuate shape is consistent with secondary impact features related to the formation of the basin. The key test will occur when we get 1-kilometer data or better and can examine the detailed morphology.

Here are some Cassini images of Tethys, shown similar to our views of Ceres in mid- and late-April. Smooth regions, many craters, and the largest fracture system, Ithaca Chasma are all very recognizable, but the small fractures and crater chains across the surface are not yet apparent. By the last week of April we should be acquiring images of Ceres at resolutions of 1.3 kilometers, although at different phase angles as this 2-week-long RC3 phase goes to completion. 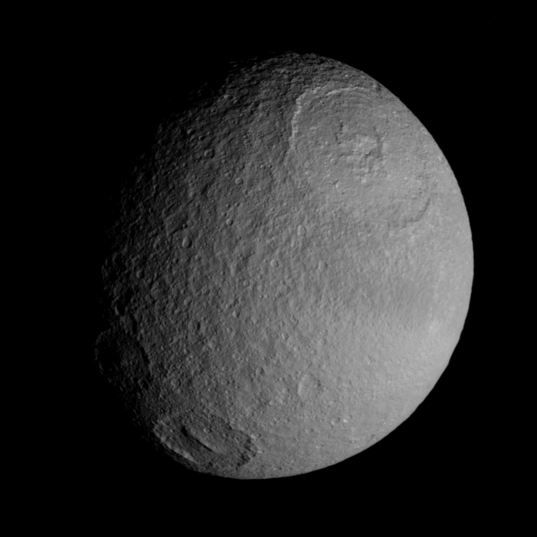 This is the side of tethys that faces away from Saturn. It includes the huge Odysseus basin in the north, and the crater Melanthius with its strange central ridge in the south. The central-peak crater Dolius just barely peeks into sunlight north of Melanthius. Cassini took the two images for this mosaic on Tethys on 21 July 2007 at 7:44 and 7:58 UTC as "ridealong" observations for a thermal infrared map of the moon. Tethys is 1062 kilometers in diameter and was 231,000 kilometers away at the time; the image has a scale of 1.4 kilometers per pixel. 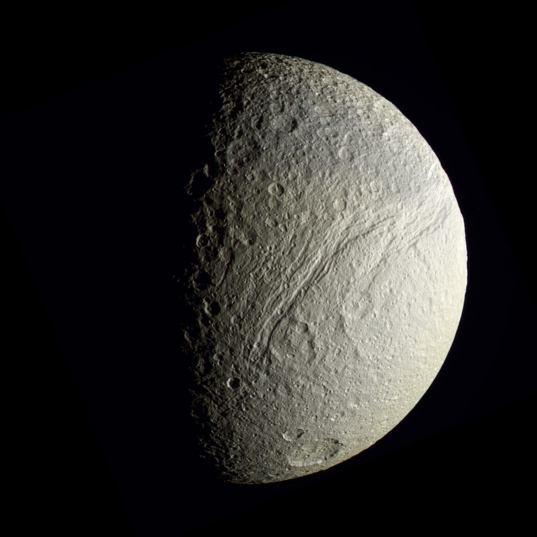 This portrait of Tethys is made of three Cassini images taken through infrared, green, and ultraviolet filters on May 10, 2008. It includes Tethys' south pole and the southern end of Ithaca Chasma, which is on the side of Tethys that faces Saturn. On the right side of the visible disk is the huge Telemus basin, but its topography is so subtle that it is difficult to see in this view.

This is Dione at 1.3 km/pixel (similar to Ceres during RC3). This exquisite image shows many features, including the relaxed craters at lower left (with prominent central peaks), the large 350-km-wide impact basin at bottom, the multiple fracture sets at right, and the smooth plains at left.

Cassini took three photos of Dione through red, green, and blue filters at 19:32 UT on 26 April 2007 for this portrait of the icy moon. We are looking at the south pole and Saturn-facing hemisphere of Dione. The Palatine chasmata slice into the disk from its right edge to the center, with the flat-floored valley of Aufidus catena diverging south from Palatine toward the huge Evander basin, only half of which is visible at the bottom edge of the disk. Other prominent craters include central-peak crater Dido, at upper center, and slightly smaler peak-ridge crater Erulus, at bottom left.

There are times in any great adventure when the pulse quickens just a little and the stomach tightens up a notch. I think I have finally reached that point with Pluto. Two weeks ago we passed the 1-AU point. One AU is the Earth-Sun distance (and yes the tiny Earth does orbit the gigantic Sun), which isn't much more than an anthropomorphic milestone. But we are also now well past the halfway point between Neptune's orbit and our destination. After 9 years of travel (not to mention a decade or more of work to get New Horizons approved, built and launched), it gives one a sense that we are really on final approach. We have passed the second-to-last signpost on the long trek. The last significant signpost will be when we reach the distance where our high-resolution camera gets images roughly equivalent to the Hubble Space telescope, sometime in May. We cannot give a precise date for this as the HST and LORRI imaging systems have different optical characteristics and whatnot. The Project will let us know when we cross this threshold. Still it will be the real mark that we are into new territory.

For the geology types out there (myself included), we will not be getting resolvable data until a few weeks before arrival. That doesn't mean we won't be doing anything. New Horizons is in Approach Phase, during which the Pluto system is under routine monitoring. This will allow us to track all the known moons to get precise orbits and monitor brightness changes to determine rotation periods and such. We are also looking for new moons and even ring systems, if they exist. So we will be very busy during approach doing things that Earth-bound telescopes can't do as well. I will have more on Pluto later this Spring. 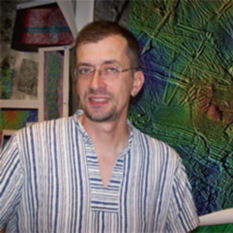