Pluto Science, on the Surface

This article originally appeared on Alan Stern's New Horizons blog and is reposted here with permission.

New Horizons remains healthy and on course for its prime Pluto system science in July!

As I write these words I am flying to a dress-rehearsal simulation (called a “sim”) of the closest approach portion of the Pluto flyby. About 40 science team members are involved—atmospheric scientists, geologists, geochemists, planetary astronomers and space physics experts. This is the second of three such multiday sims that the science team is doing to prepare for the flyby in July. 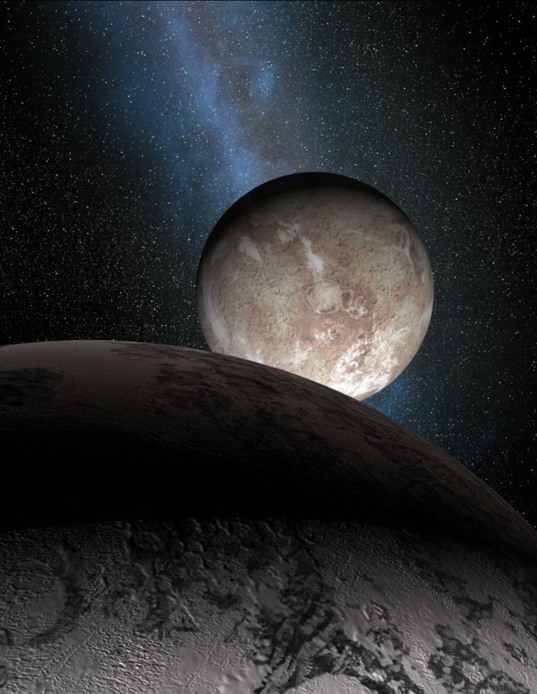 Concept of Charon (in the foreground) and Pluto (in the background) that space artist Ron Miller created earlier this year. It may be one of the last artist’s concepts ever created of Pluto and Charon before we know what the pair really looks like!

But this is far from the only type of flyby simulation we’re doing across the project. There are also sims to practice optical navigation to home in on Pluto, sims to practice searching for hazards on approach, sims to handle possible instrument and spacecraft anomalies, and more. Some sims only involve a handful of people, some (like the one I’m headed to) are much larger; but all involve practice datasets that scientists and engineers retrieve, reduce and analyze as a part of the practice. In total, several dozen mission sims have already been completed over the past few years. Now that we’re on early approach, we have just a few left. Hard to believe, but we’re almost finished training for encounter operations!

Right now, just as when I wrote in January, the SWAP, PEPSSI and SDC instruments are taking daily science data—measuring the charged particle and dust environment of space near Pluto’s orbit. And now, the LORRI long-focal-length camera aboard New Horizons has started imaging the Pluto system for navigation purposes. This has yielded a few dozen images of Pluto and Charon — which still remain just dots in the distance — against star fields. Despite the low-resolution imagery of Pluto and Charon when we are still so far out (well over 100 million miles), these images help us triangulate the distance to our targets more accurately than any other navigation technique we have.

Of course, the images are getting better as we get closer, and by April, they will begin to reveal Pluto as a tiny globe a few pixels across, rotating in the far distance, by then just 70 million miles or so away.

Last month, I wrote about the Pluto atmospheric science we plan to do during the flyby, and promised that this month I’d preview the surface geology, geophysics and composition measurements we’re planning.

We know that Pluto’s surface is, on average, extremely reflective, like freshly driven snow. We also know that surface has very large markings with greatly varying reflectivities and various shades of red to neutral color. We know the surface ices are dominated by molecular nitrogen, and that hydrocarbons like methane and ethane are present, as is carbon monoxide ice. We also know that the proportions of all of these ices vary as Pluto rotates and shows us different terrains. We don’t know much else, because we can’t see enough detail from Earth to determine the planet’s geology, how cratered it is, or any signs of ongoing geophysical or geologic activity. That has to wait for New Horizons in July.

We know even less about Charon. Its surface is about half as reflective as Pluto’s, but still reflective enough to be indicative of ices, as opposed to dark soils like on the Moon and Mars. We know that Charon’s surface is not tinged red like Pluto, but is neutrally colored. And we know that Charon is covered primarily in water ice, with hints of ammonium hydrates laced into the surface. Like Pluto, our current lack of spatial resolution prevents us from knowing much more.

Even the best images of Pluto, made by the Hubble Space Telescope, are too crude to reveal geologic details, because they can only put few pixels across the planet. Compare a Hubble image of Pluto (left) to an artificially blurred image of Earth at the same pixilation, and you’ll see how little we know!

Frustrating as our lack of knowledge about Pluto and Charon is, it’s all about to change, beginning in just a few months when New Horizons becomes close enough to start seeing new details.

Our objectives for studying the geology, geophysics and geochemistry (surface composition studies) of Pluto and its family of five known moons were set by scientific advisory committees to NASA; they include:

By the way, we’ll attempt to achieve many of these objectives on Pluto’s smaller moons too, though some are not well positioned at flyby (given their tiny sizes) for as detailed a look as we’ll have at Pluto and Charon.

Just like our atmospheric science objectives, the list of geology, geophysics and geochemistry objectives is long and ambitious. But we’re carrying a very capable suite of scientific instruments designed to probe these questions. Here’s a brief preview of the New Horizons instruments that address them:

Ralph is our primary mapper; it will obtain black and white, color, and composition maps of Pluto and its moons. These will be used to address virtually all of the objectives listed above. In fact, some of the spectral bands Ralph will map across these bodies will even let us indirectly map surface temperature variations from place to place and overlay those on color, composition and geologic maps.

LORRI is our high-resolution imager; although it doesn’t have many of Ralph’s sophisticated color and composition mapping capabilities, it has about five times the magnification and therefore about five times the resolution on the surface that Ralph offers. We’ll use it to map Pluto and its moons, to determine the granular properties of their surfaces (by observing how their brightness varies from place to place at many different angles), and to give us high-resolution shape profiles. LORRI’s best images will have resolutions just a little better than 100 meters per pixel on both Pluto and Charon — something unprecedented in a first planetary flyby. And LORRI imaging of each object taken at different points along the flyby trajectory when we are close will let us make stereo maps to reconstruct 3-D topography.

This table summarizes the approximate best resolution New Horizons will obtain on each body in the Pluto system for various types of imaging. Panchromatic Imaging means black and white.

REX, our radio science experiment, will better determine the diameters of Pluto and Charon through radio-occultation experiments. It’ll also yield better masses for the two bodies by tracking (with radio, of course) how our trajectory changes as we fly by. And it will directly measure surface temperatures in a special mode called radiometry.

As you can see, we have in our arsenal a wide variety of ways to reveal the surface geologies, compositions, and internal geophysics of both Pluto and Charon and Pluto’s smaller moons.

The fun begins in late May, intensifying across June and then July. So stay tuned: As I said last month, soon I won’t have to write about plans because I’ll be able to tell you about results.

Well, that’s it for now, I’ll write again in about a month. Until then, I hope you’ll keep exploring—just as we do.

I've said it before and I'll say it again, I am SO SO GLAD that they weren't able to demote Pluto until AFTER this thing was launched. Had they succeeded it'd never have happened.

@Messy It's like getting a star in Guide Michelin. They just haven't even tasted Pluto yet. Oh, the IAU should not have gotten themselves involved in this business of trying to define what a planet is. Now they have thousands of exoplanets to categorize according to their random criteria. The joke is on them. For them to learn until next time. "Andromeda is not a galaxy"

You've got a lot of work for the next few months, I know. Still, in between mapping Pluto's system and heading off for KBO's unknown, you might give a little thought to a simple exercise: photographing nearby stars and their surrounds. With a baseline 20-40 times better than Earth, we'd get a much better idea of their distance.

@tony: The cameras on New Horizons are a lot smaller than the telescopes used on earth and in orbit to do parallax measurements, so that, and the limited numbers of observations that can be made of each star, would limit any real science that can be done with such pictures. That said, there could be very interesting educational and PR values in such images. It would be fun to see stereograms, made from NH images and images from s similar-sized telescope on Earth of all the nearest stars, as well as other objects such as the Hyades star cluster. Perhaps before the first hibernation after the Pluto flyby activity is all completed...

The panchromatic imaging resolution for Styx and Kerbeos seems reasonable, but the figures for color and composition mapping for those moons have to be wrong, they don't make any sense at all.