Opportunity did the first drives upslope around sol 3745 on its long journey toward the crest of the highest rim segment of Endeavour crater, “Cape Tribulation.” The surface here consists of a smooth regolith streaked with ripples of sand blowing off the plains to the west. There is a long ridge with spectacular rocky outcrops that makes a nice ramp for the first part of the climb and in the past couple of sols Opportunity began the approach to that ridge. There are some really big rocky outcrops on top of the ridge and we would like to find out what they are. But the slopes of the ridge are too steep to climb to the base of the outcrops. So we will drive up to the base of the ridge and look at some of the scree or float that has rolled down the slope and collected at the foot of the ridge.

Navcam view of north-facing side of ridge at Cape Tribulation

A view from north of the ridge a few sols before arrival. This is a rather large outcrop and it is unusual. It is not clear why a long, linear ridge should be located here on the rim of Endeavour crater that runs a right angles to the rim. And the significance of the well-defined layer of outcrop capping the ridge is even less clear. We have lots of ideas, but we have not seen anything quite like this before here at Endeavour crater.

Pancam view of north-facing side of ridge at Cape Tribulation

This color Pancam image from the same location as the above Navcam shows the outcrop a little better. A lot of rocks are tumbled off the outcrop and should be accessible at the foot of the slope.

South-facing side of ridge at Cape Tribulation

After the drive on sol 3751 Opportunity was in position to look back at the south-facing side of the ridge. Note the rover tracks off to the right. A few weeks ago Opportunity was driving along that ridge way off in the distance. The interior of Endeavour crater is in the upper right. The slope up to the outcrop here is pretty steep, so all the rocks littering the surface in the foreground are derived from the outcrop up on top. For scale: The larger rock about halfway up the slope on the left is about 40 to 60 cm across and about 8 to 9 m away. Unfortunately, as of this writing the Navcam frames centered on the outcrop were still just thumbnails. (In fact, ever since we got within a hundred meters of the ridge, all the downlinks have been wimpy and most of the data is still on Opportunity waiting to be sent. As a result all frames of the outcrop are thumbnails only. This should be plenty of basis for all sorts of conspiracy theories.) 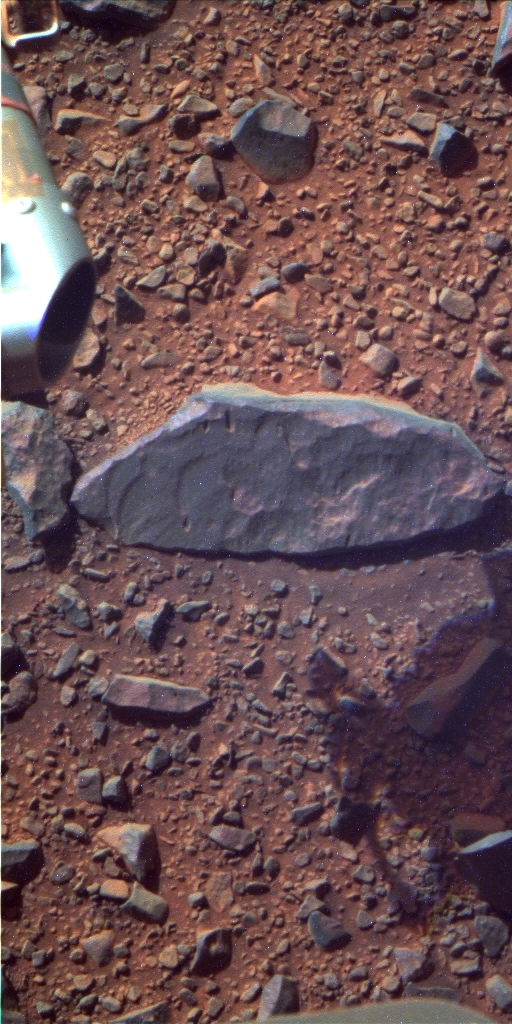 For the next couple of sols we will look at a sample of these rocks. Here is one right in front of Opportunity as seen with the Pancam. Looks like a fine-grained basalt. We have seen basaltic rocks in a few places along the crater rim, but this ridge is largest exposure so far. 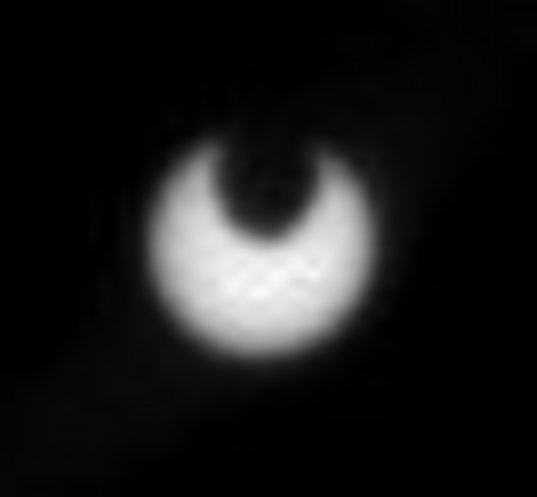 We did a quick Phobos transit observation a few sols ago. These transit observations are data points on the orbital determination of the Martian satellites and should come in handy some day when astronauts are trying to catch up and land on the moons of Mars. 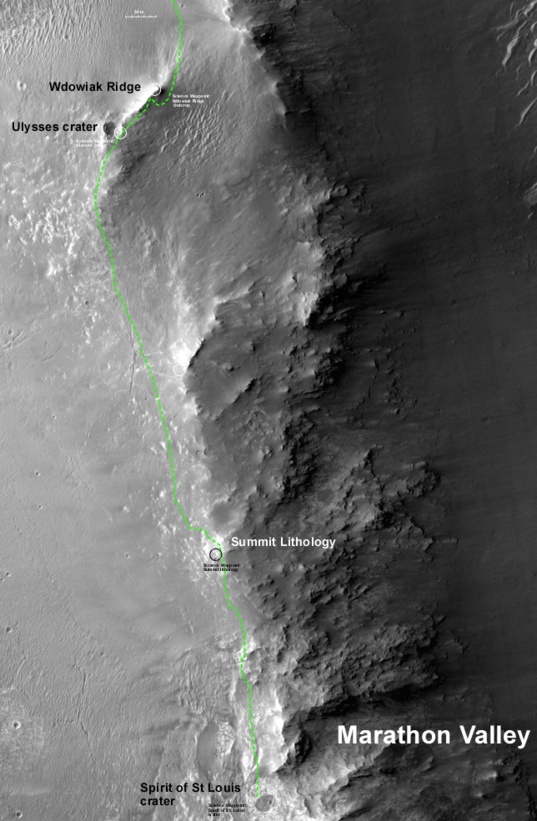 The ridge where Opportunity is operating on this sol is the ridge near the top of this image labeled "Wdowiak Ridge." We are on a quest. The quest is to examine some really wild geology and outcrops about 1.3 km south of the current location at a place dubbed “Marathon Valley.” Above is the 1.5 km long path that we will try to follow in order to get there. We have two options: (1) take our time and pull into Marathon Valley just before winter shuts everything down, or (2) make rapid progress and arrive at Marathon Valley early enough in the season that we can do some sight-seeing before weather shuts things down. So far we are way ahead of schedule. But we have covered only about 1/5 of the traverse so far. So there is still plenty of time to get behind schedule!

Does the outcrop at Wdowiak line up on opposite side of crater with Cape York ? Is the dowlink hosed because of the safe orbit adjustments for comet Siding Spring ?