• Opportunity is looking now at some odd, possibly mineralized rocks

On January 24th, we opened a new exhibit in honor of the tenth anniversary of MER operations on the surface of Mars. The new exhibit is a supplement to the existing Mars Exploration Rover exhibit installed in December of 2003. Instead of attempting to capture all the important scenes and moments of the Mars Exploration Rover Mission, the exhibit is themed as landscape art and arranged as a series of very large format images in a minimalistic gallery type setting suitable for contemplation. The exhibit is focused on a few samples of the important "works" by the "artists" Spirit and Opportunity. 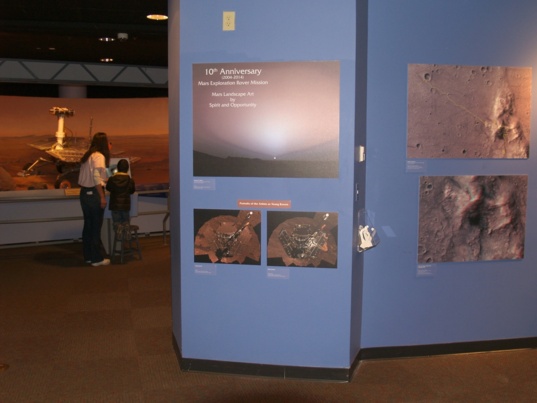 The rover replica in the background is part of the existing exhibit originally installed in December 2003. Note the text description of the two rovers: "Portraits of the Artists as Young Rovers." 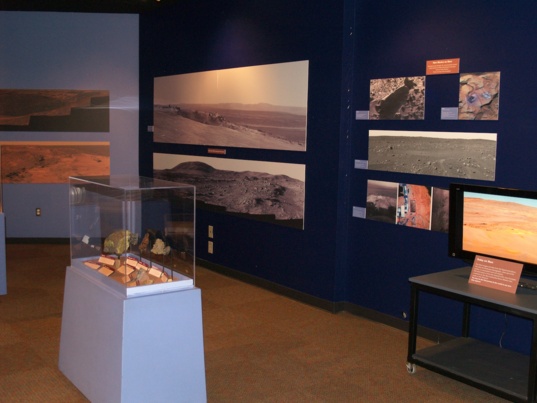 The exhibit consists of several large panoramas, including two favorite "black and white" panoramas from Spirit and Opportunity, a display of minerals from New Mexico that have also been identified on Mars, and an actual rover wheel on loan from the Jet Propulsion Laboratory. An additional component is a monitor displaying day to day "technical" images that illustrate some of the things not usually "digested" for the public. 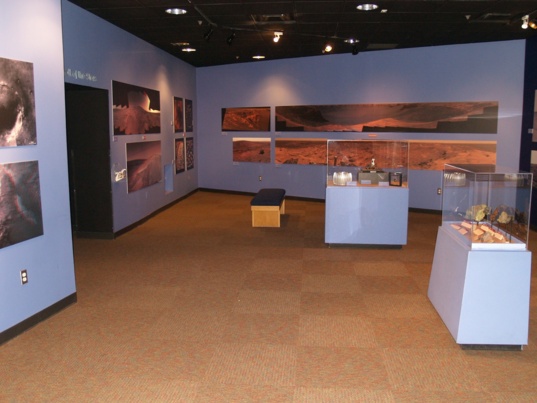 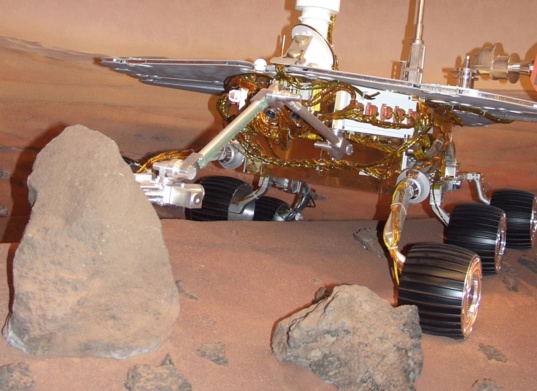 The MER rover replica, along with its 8 percent basaltic rock population diorama, remains on display along with several interactive kiosks about the rover, the mission, and Mars in general. Video monitors in the exhibit also display the status and most recent results.

Opportunity is still exploring an outcrop high up on Murray Ridge as the winter solstice on Mars approaches. At this location the tilts are good, so Opportunity is getting excellent solar input on its solar panels. Meanwhile Opportunity is checking out some of the outcrops here at its winter haven.

In late January the odd rock "Pinnacle Island," which was widely described in the news media as looking like a "jelly donut," was the target of some intense study by Opportunity. This rock has some unusually high elements, and elements of the type that are commonly moved by water.  Some of the characteristics of the elemental abundances are somewhat like some mineralized deposits here on Earth. So we suspect that something happened here to leach rocks in one place and deposit some of the elements in another. Maybe it was hydrothermal circulation associated with Endeavour crater. Or maybe it was something else from the early days of Mars geologic history. That is why Opportunity is moving in to look at a couple of other rock.

In the last week Opportunity moved a few meters away from the "jelly donut" rock Pinnacle Island, and began looking at another outcrop. The moved allowed Opportunity to look back and see if there was an obvious source for the loose rock that it had been looking at over the last few weeks. 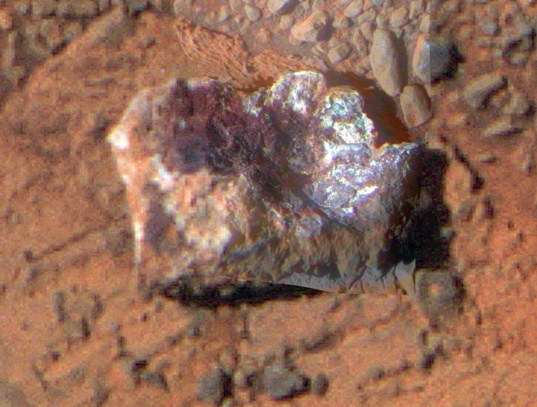 Pancam image of "Pinnacle Island" merged with several Microscopic Imager views of the rock. The resulting image gives a high resolution perspective on this rock. 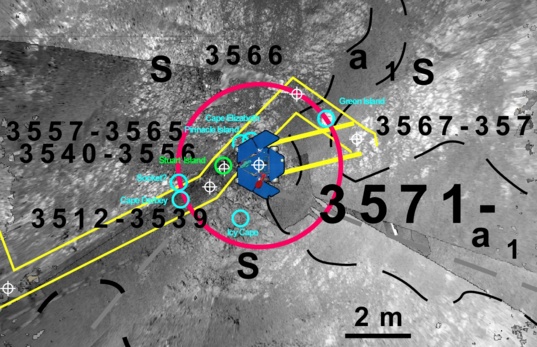 This is the short drive that Opportunity did over the weekend (Feb 8-9) to set up for looking at one of the odd rocks in this location, "Stuart Island", which is particularly colorful. Check out the image below from sol 3571. 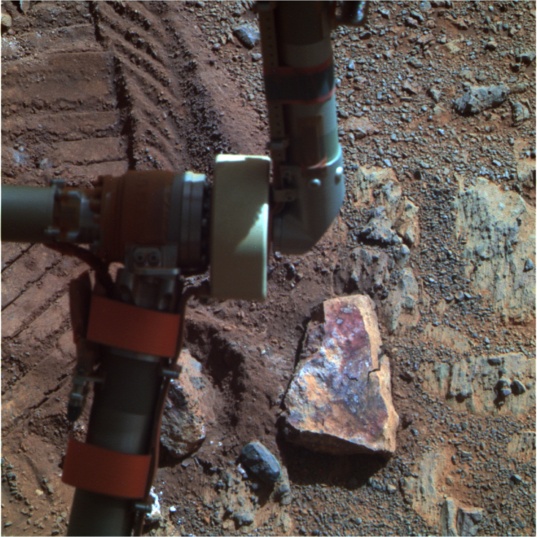 The target of the short drive, "Stuart Island", a colorful rock just uphill from Pinnacle Island. This rock has possible patches of differing mineralization, so we will be analyzing several spots on it to see if we can sort the differences out. It will be the focus of Opportunity's geologic study over the next few sols. Then we will likely continue south and uphill.

Good blog post. I have not visited this museum; its not my home state - actually that of 12 generations of my ancestors. But please, for sake of clarity can you start by using the full name "New Mexico" then followed by acronym. [common rule, essential when working for NASA] I was critical of Lakdawalla use of the term "valley" in describing the terrain beyond the gully or ravine that Curiosity just passed through. Over the whole mission, MER has used colloquial naming conventions to entertain and maybe peak the curiosity of the public. It is not so bad but the mission scientists and others could follow up more with real details digestible by the public. They fall short. Pinnacle, the Jelly Donut, came from Stuart Rock (not mentioned here). Gee, I am a physicist with love of geology, geography, ..., Pinnacle shows a type of cleavage. The stress, that Oppy's wheel imparted, broke the rock along a cleavage layer. The concavity of Pinnacle might be from a dislodged rock implanted in metamorphic rock. The latter might have been regolith turned to stone by the energy of an impact, volcanism or by water. The whitish mineral should help to answer which mechanism. While Stuart shows planar, Pinnacle does not; also indicating possible imbedding of a rock within metamorphic. The small rocks around Pinnacle show wearing. Is it wind or water or by gravity over 100s of millions of years?

Allow me to add another suggestion(s). I have been a NASA employee since the 1990s; not right now, unfortunately. On these long missions, Opportunity now over 10 years, there is a need to re-invent ourselves. These robotic vehicles cannot but we can. I think Squyres should have apprentices for also putting out to the public that keep the mission fresh and alive and the information, especially for special events such as Pinnacle, even more lively and with details. As a friendly poke, maybe Squyres et al. have grown older faster than Opportunity has. Early on, panels of instrument lead scientists spoke to the public. They are off doing other things now but they too should have Co-Investigators, apprentices as I said, or JPL designated specialists that take their role, to speak out to the public. Lastly, the NM Natural Museum has a great exhibit but it need not be limited to the relatively small numbers that pass through their halls. NASA does this to some extent but I would suggest that NASA build a 1000 inexpensive panoramas (with descriptive caption) and send them on a relay tour of the country's school systems. Simple ones that just need two 8 foot folding tables to display. I've printed some fine tiled panoramas for family and coworkers and they are inspiring.

Thanks for the updates on Opportunity. Are you thinking about doing a geology blog on what we have learned at the various key points that have been of significant discovery, for starters?

Telluric- Thanks for the input on jelly doughnuts possible make up.

Stuart Island, "patches of differing mineralization". Interesting. What if this is a very small piece of a painted fresco, like the Sistine Chapel?