Two and a half decades after watching the Neptune encounter on television and on the eve of my thirty-fifth birthday, I’m attending the New Horizons Science Team meeting at the Applied Physics Laboratory in Laurel, Maryland. These meetings have occurred once a year during the long cruise phase of the mission, but there will be four this year because of the impending encounter. 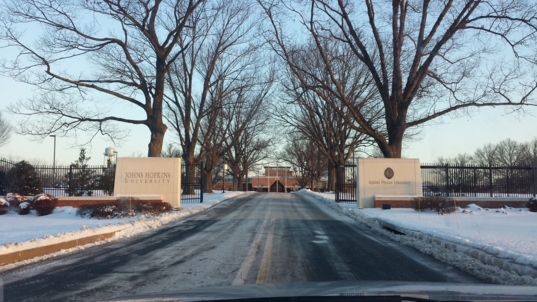 I vividly remember Voyager 2’s 1989 flyby of Neptune and Triton. I was ten years old and just developing my interest in planetary exploration. Voyager 2 completed the initial exploration of the solar system’s major worlds, with one glaring exception: The Pluto-Charon system, a small double planet that was, at the time, crossing Neptune’s orbit and regaining its position as the most distant known entity in the solar system.

Twenty-five years later, NASA’s New Horizons spacecraft is approaching the orbit of Neptune on its way to encountering these distant worlds next year, making 2014 Pluto Eve, to borrow from New Horizons principal investigator Alan Stern. In the intervening years, Pluto’s place in our solar system has changed. While it had been predicted, the existence of the Kuiper Belt, a region populated by icy worlds beyond Neptune, was still speculation in 1989. Beginning in 1992, with the discovery of 1992 QB1, the Kuiper Belt has become a very real place, a veritable zoo of worlds of which Pluto is the largest in size (although one, Eris, is more massive). Four more moons orbiting Pluto have been discovered, making the Plutonian system a microcosmic zoo of Kuiper belt objects.

New Horizons is healthy and is undergoing its last year spent mostly in hibernation. Several major concerns have largely been addressed. The discovery of tiny moons at the limit of the Hubble Space Telescope’s resolving power raised the specter that Pluto might be surrounded by a swarm of smaller objects that could endanger the spacecraft. Because the data from the flyby will be transmitted about a year after the flyby, a loss of the spacecraft would mean the loss of most of the encounter data, including most of the approach data since it would still be a waiting transmission. Follow-up observations indicate that the current trajectory is probably safe, although an alternate, more distant flyby sequence has been planned just in case a late discovery proves otherwise.

In addition to the “New York Times” images that will be returned early – images for publicity during the encounter - 53 LORRI images (34 lossless, 19 lossy) and other data will be returned during the core-encounter people as a contingency in case something goes wrong. During the close encounter period, 1847 LORRI images will be taken. To conserve memory, only 1041 of them will be full-resolution, and 806 will be binned 4x4 to conserve memory.

This will be painful for a lot of you to read, but we cannot expect to see all of the New Horizons images and other data quickly; no one will. A quick-look (highly compressed) version of the data not included in the contingency transmissions will be transmitted to Earth over a period of 63 days that will not begin until September 14, 2015. Transmission of the full data set will begin after that (mid-November), and will take about a year.

The team recently carried out a successful Pluto encounter dress rehearsal, indicating that current plans are sound and ready to go. Also, improved ephemeris has led to a much better idea of exactly where Pluto is. This cuts the risk of images and other measurements missing their targets, and cuts down on the need to image large areas of empty space to ensure that Pluto and its moons are actually imaged, which saves valuable data storage space.

Another risk that has been resolved isn’t to do with the New Horizons spacecraft, the Plutonian system, or even mission-specific. A few years ago, the administration proposed taking Education and Public Outreach (EPO) away from NASA, putting it in the hands of the Department of Education. This would have separated public outreach from the scientists and engineers who run the missions, and would have put it in the hands of people who don’t know (or possibly don’t even care) about NASA and the science carried out by its missions. This has been thwarted so far, and it appears that the administration has abandoned that effort. 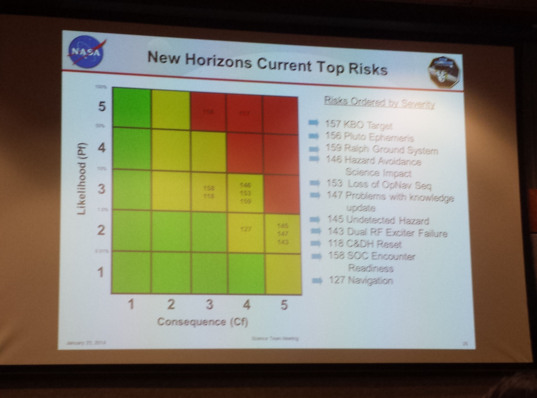 Work has been done to work out every contingency that could happen during the encounter. Given the spacecraft’s distance, if an instrument malfunctions during the flyby, it would likely not be recovered until after the flyby, missing its most critical science. Or worse, something could happen to cripple the spacecraft during the encounter, wiping out all observations. Two hundred forty-eight possible contingencies have been planned for, to ensure that this does not happen. Additionally, calibration work that involves significant meddling with instruments will be done after the flyby to cut down the risk of causing a malfunction that can’t be fixed on time for the most critical periods.

The team is doing tests for a unique experiment, one which I had not previously realized that New Horizons was doing. Namely, it will attempt to take bistatic radar measurements, with the spacecraft picking up a signal from Earth that has bounced off of Pluto, gleaning valuable data on its surface properties. Such experiments have been done from orbit around Venus, Mars, and the Moon, but this will be by far the most distant use of this technique.

I remember an illustration in Sky & Telescope depicting Voyager 2 as the head on a human body, walking out of a delivery room carrying Neptune like a newborn baby, with the announcement “It’s a planet”.  And so it is when a spacecraft encounters what has previously been a fuzzy blob and gives birth to a “real” world for the human mind to contemplate.  And, if all goes well, next year, another world (or, as was also true in 1989, collection of worlds) will become “real” to us.

I’ll be reporting tomorrow on cruise science, planning by the instrument teams, the search for a Kuiper Belt Object to target in the extended mission, and anything else of interest that may come up.

Great update. I plan to use your comments in my lectures on New Horizons that I give locally. Very interesting and very much appreciated!!! Please keep these updates coming as there is an audience listening out here!