Fall Issue of The Planetary Report is Here!

The fall issue of The Planetary Report has mailed and is on its way to our members’ doors.  Those of you who prefer an electronic file, or a preview of the printed copy, can pick it up here.

Paul Schenk studies the surface features and geologic histories of the outer planets’ icy moons. Using spacecraft imaging and other data, he also creates maps of those moons. Recently, in the course of working with Cassini images of Saturn’s larger, icy satellites, he found something he didn’t expect: bright, bluish spots splattered around the equator of Rhea. Intrigued, he dialed up the color in the images of those moons, finding complexities in their surfaces not visible to us in the red-to-blue (natural) wavelengths. In “Blue Pearls for Rhea,” Paul describes his discovery and shares the fruits of the mapping project it inspired. 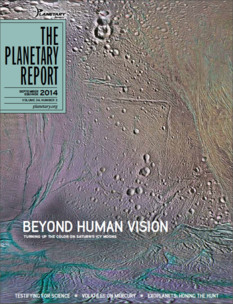 In its three years of formal data collection, MESSENGER has lived up to its name by delivering an abundance of new, and often surprising, information on Mercury. Some of these discoveries may help reshape scientists’ thoughts about the innermost planet’s and, perhaps, the entire solar system’s formation. In “Missives from MESSENGER,” Rebecca Thomas describes how small features known as hollows, along with volcanic pits, point to a world with more volatiles and, thus, past geologic activity, than Mariner 10 and Earth-based observations have led us to believe.

In late summer, our collective efforts to ensure the future of NASA’s planetary exploration program paid off in an unprecedented way when Society president Jim Bell was invited to testify before the U.S. House of Representatives Subcommittee on Space. Casey Dreier recaps this milestone event that you, our supporters, helped make possible.

Bruce Betts describes our collaboration on a new project using a laser to stabilize and precisely calibrate possible detections of Earth-like exoplanets over long time periods, and some down-to-Earth repairs to our Optical SETI observatory.

Things just keep getting more exciting around here. If you aren’t a member yet, we’d love to have you join us. You’ll receive this quarterly magazine and the satisfaction of knowing that you are helping move the citizens of Earth forward on the path to our greatest adventure.