Space science, by which I mean the scientific study of space from within space, is well over sixty years old now. Its origins date back to rocket launches done in the late 1940’s and early 1950’s, and it was actually scientists from the Naval Research Lab (NRL, where I work) that placed the first ever scientific instruments into space. At the time it was to study the Sun, and indeed to this day our group still sends up rockets to study the Sun. (We’re very proud of our history!) Later in the 1950’s, a group of leading scientists from NRL and around the country became the first to join the newly formed National Aeronautics and Space Administration, also known as NASA. We know much of the rest of the story with the Space Race, Apollo and Shuttle eras, so I’m not going to get into that. But there’s one bit of space science history I don’t see a whole lot written about, and I think it’s worth highlighting.

In February, 1979, the US Air Force launched the P78-1 satellite, aboard which was an NRL white-light coronagraph known as SOLWIND. This wasn’t the first coronagraph in space, but was definitely an improvement over those flown as part of the OSO missions in the 60’s and 70’s, and it led to numerous insights into solar dynamics and transient events like coronal mass ejections. Yet, while important for solar physics, SOLWIND’s truly historic discovery was not a solar event – it was a comet!

During SOLWIND’s five (or so) operational years, data analysis efforts were led by NRL scientists Don Michels, Marty Koomen, Russ Howard and Neil Sheeley, the latter two who still work at the Lab, just down the hall from me (and I see Don from time to time). As they looked at the SOLWIND images taken on August 30, 1979, they were initially horrified to discover a huge bright streak had appeared in their data during that day. Their first thought was that something had happened to the camera and it was now getting a big ugly reflection inside it, but when they studied the images some more they realized that this feature was actually moving, and appeared to be a comet. 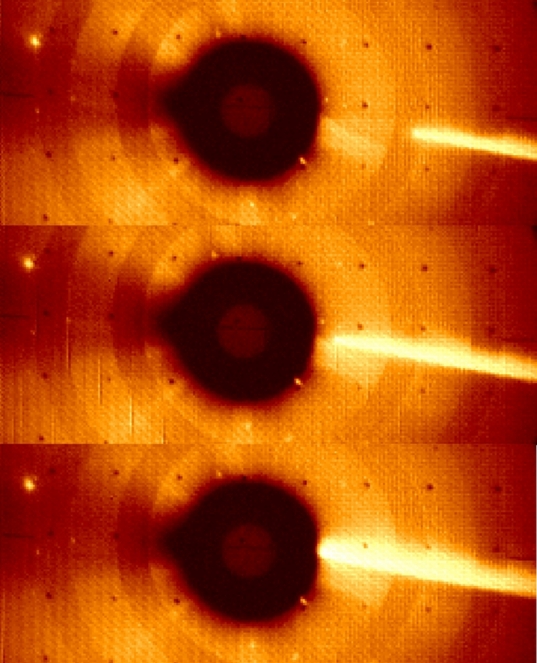 Three consecutive images of comet C/1979 Q1 plunging into the solar atmosphere on August 30, 1979. In these SOLWIND coronagraph images, the Sun is masked behind the solid disk in the center of the image.

Over the course of the next several hours of data, the comet disappeared as it went past the Sun, implying that it was destroyed during its passage. This was their first clue that they were witnessing a sungrazing comet, and indeed that’s exactly what it was, as later analyses showed it belonged to the Kreutz-group of sungrazing comets. It’s actually possible that this particular comet plunged straight into the Sun as opposed to grazing past it, but the quality of the data is not sufficient to determine that with any reasonable confidence. If you want to read a little more about the discovery and don’t mind visiting your local library, it was featured in an article in Science Magazine on 26 February 1982 [Vol 215, pp. 1097-1102].

I’m not sure exactly when the significance of their discovery set in. SOLWIND data was not returned in anything close to real time as it is now, so while the discovery was new, the data itself was actually a few months old by the time they received it. But regardless of the delay, this marked the first time in history that we had discovered not only a comet, but any solar system body, from space!

Today, of course, we’re used to it. Satellites such as SWIFT, WISE and SOHO are discovering new comets and asteroids on a weekly basis. But that all had to start somewhere, and I think SOLWIND’s first comet discovery is both a milestone and a watershed moment that we should take time to recognize and appreciate. SOLWIND went on to observe a total of ten previously unknown comets from 1979 to 1985, before the mission ended in 1985 when the satellite was destroyed by a ground-based missile in a planned Air Force exercise. (Also a first!)

Interestingly, the SOLWIND discoveries also led to some high-impact changes with regards to naming of astronomical objects. The first few comets were initially named after their discoverers - Sheeley, Koomen, Howard and Michels – in much the same way that ground-based comet discoveries are named after the first observer to report them. But at some point in time (I’m not entirely clear when), the International Astronomical Union realized that satellite discoveries may become the norm rather than the exception, and deemed that objects discovered in “survey” images must be named after the satellite or survey that found them, and not the person who identified the object in the images. That’s why today we have more than 2,700 comets named “SOHO,” and dozens with names like “LINEAR,” “WISE,” and “Siding Spring.”

The P78-1/SOLWIND mission is often overlooked and its achievements not well-publicized, partly I suspect, because it was a United States Air Force Space Test Program mission. This program doesn’t get the limelight the same way NASA missions do, even though it has successfully flown hundreds of experiments since the 1960s. But I certainly think it’s worth taking a second to reflect on that pivotal SOLWIND discovery made exactly 35-years ago, and the historic milestone it represents.

Keep up-to-date on the latest sungrazing comet news via my @SungrazerComets Twitter feed. All opinions stated on there, and in these blogs, are my own, and not necessarily those of the Naval Research Lab or NASA.

Interesting. When I first saw the pictures illustrating this post, and before reading more than the title of the story, I thought they might be of the first (I believe) comet discovered during a solar eclipse, Tewfik. It is a neat little fact, that this SOLWIND comet was the first solar system object discovered from space.

It may be some years ago now, but as far as I remember, none of those events went unnoticed at the time, even here in Norway, where I live. My daily newspaper had at least one article with pictures showing the comet colliding with the Sun, presented as something never observed before. The ASAT test, where a missile was fired from an F-15, also got some TV news coverage; because it was the first or one of the first successful live tests as part of President Reagan’s highly controversial “Star Wars” program (or so the said). And a few days later, there was a newspaper article about scientist complaining about those military idiots, which had blown up this solar observing satellite which was still returning useful data.

Goldfires: Well I'm not going to name any names... but I have heard directly the dismay from certain scientists that their instrument was so abruptly and unceremoniously "decommissioned"! (There was no forewarning, that I'm aware of). That said, I think the instrument was degrading at that point anyway, and likely wouldn't have returned much useful data beyond that time. It was soon superceded by the SMM mission, which launched a couple of years later and discovered another ten Sungrazers. Then came SOHO...

Karl - Thanks for the nice story. With the way the military doesn't tell us stuff and other countries get the word, it doesn't surprise me that it had little notice at best. SMM was a great mission also. On the day it failed I was in radio and I had a NASA SMM scientist call in to claim his prize, a computer if I recall correctly, and I asked him about the failure. He was shocked to hear about it. I suggested he may want to reach his PI and get the latest. Later on an Orbiter mission was planned to rescue the spacecraft.

Follow-up to my comments: 1. SOLWIND was indeed very much on its last legs when the mission ended. It had three on-board tape recorders for recording data, all three of which had failed by the time the satellite was destroyed. [Russ Howard told me this just yesterday] The amount of useful data it could return was minimal at best. 2. Correcting myself slightly, the SMM and SOLWIND missions actually overlapped somewhat. I'd thought SMM launched later than that, but not so. Bob: Yes, SMM was indeed successfully repaired by a space shuttle crew. Another interesting space history tidbit!