Jupiter’s moon Io is perhaps the most volcanically active body in the solar system. Thanks to an orbital resonance with two of its neighboring moons, Europa and Ganymede, Io is continuously squeezed. The resulting friction heats Io's interior enough to create a mushy magma ocean only 50 kilometers (30 miles) beneath its surface. It is likely that this partially molten asthenosphere provides the source for basaltic silicate lava that erupts at hundreds of volcanoes across Io’s surface (though future missions to Io will be needed to confirm the existence of this magma ocean). Recent ground-based observations shed new light on the most powerful of Io’s volcanic eruptions. 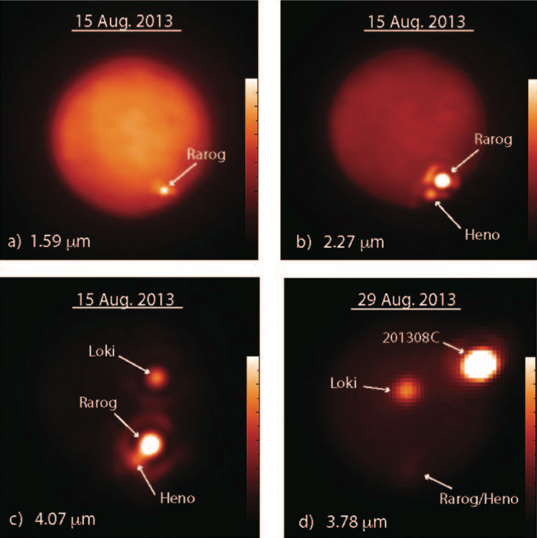 Keck II and Gemini North Observatory observations of Io taken on August 15, 2013 and August 29, 2013. The three images from August 15 were taken at different near-infrared wavelengths and show the intensity of the Rarog Patera eruption. The image from August 29 shows the 201308C eruption, then just starting, and a faint spot from Rarog and Heno, suggesting that 14 days after the start of the their eruptions, they had both quieted down.

This volcanic activity has been monitored over the last 35 years by ground-based observatories, the Hubble Space Telescope, and several spacecraft that have visited Jupiter over the years. Unfortunately, the most recent spacecraft to visit the Jupiter system was New Horizons seven years ago and the next spacecraft to visit the system, the European Space Agency’s Jupiter Icy Moon Explorer (JUICE), will not arrive until 2030 (Juno will arrive in 2016, but does not have the instruments to observe Io’s surface in any great detail). In the meantime, ground-based observations can make a significant contribution toward filling the gap, regularly monitoring Io’s volcanic activity.

Many of Io’s volcanoes are persistent, meaning they maintain relatively consistent levels and styles of activity for years or even decades. Examples include Pele, a lava lake whose thin crust is regularly broken up by churning from below, and Prometheus, a lava flow field that heats up the sulfur dioxide frost below it to produce an umbrella-shaped plume of gas and dust 100 kilometers (62 miles) tall. Many of Io’s lava lakes and lava flow fields (some reaching 300 kilometers or 186 miles in length) are persistent, but can show significant fluctuations in activity. However, some volcanoes are much less regular in their volcanic activity, remaining quiescent for years before experiencing “outburst” eruptions. These outbursts can begin suddenly, starting at fissures in Io’s crust, and generate fire fountains that can jet lava up to a kilometer (0.62 miles) into space before falling back to the ground to produce extensive lava flows. Over the course of hours and days, outburst eruptions quiet down as the fire fountaining subsides and lava flows through insulated channels along the surface.

Recent observations by astronomers Imke de Pater, Katherine de Kleer, and Ashley Davies at the Infrared Telescope Facility (IRTF), Gemini-North and Keck II Observatories atop Mauna Kea in Hawaii revealed an astonishing three outburst eruptions over the course of two weeks in August 2013 at Rarog Patera, Heno Patera, and an unnamed volcano 350 kilometers (217 miles) west of Isum Patera (201308C). Their results were recently published in a pair of papers in the journal Icarus: "Two new, rare, high-effusion outburst eruptions at Rarog and Heno Paterae on Io" and "Near-infrared monitoring of Io and detection of a violent outburst on 29 August 2013".

All three eruptions are among the 10 most powerful eruptions ever observed on Io (the most powerful was an eruption at Surt in February 2001, which was three times more powerful than the 201308C eruption, which is the second or third most). Considering that analysis in 1994 and in a companion paper by de Pater suggests that such outbursts should only be observed 4-10% of the time, observing three in quick succession is astonishing. In fact, only 13 had been observed between 1978 and 2006. Thanks to their monitoring campaign, de Pater, de Kleer, and their colleagues were able to observe the three eruptions over the course of two to four weeks, improving our knowledge of how Io’s outburst eruptions change with time. 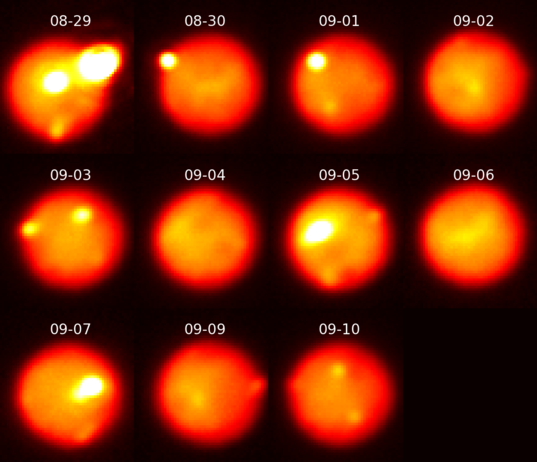 Gemini North Telescope observations from August 29 through September 10, 2013 showing the evolution of the 201308C eruption. The hotspot is seen on August 29 and 30 as well as September 1, 3, and 10. The other images show other faces of Io. Addition hotspots seen include Loki Patera and Marduk.

De Pater and de Kleer observed Io at multiple near-infrared wavelengths between two and five microns. From these measurements they were able to constrain the energy of the eruptions, the temperatures of their various components, lava ages, and their surface area, and how these changed over time, with the help of an eruption model developed by Ashley Davies in 1996. In the Rarog and 201308C cases, the eruptions started vigorously, with a large hot component, likely from active lava fountains, and a still warm “cool” component, suggesting lava ages of only a few minutes. In both cases, de Pater and de Kleer likely caught the eruptions just as they began, on August 15 for Rarog and August 29 for 201308C. At Heno, the calculated temperatures on August 15 are more consistent with some lava fountaining and much greater area of surface flows and a higher lava age, suggesting that the eruption there began a day or so before. Interestingly, model fits to the 201308C data could be consistent with ultramafic lavas, a type of runny, high-magnesium, silicate lava that was much more common on Earth 1-2 billion years ago, though basaltic lavas, like those seen in the eruption at Earth’s Kilauea, cannot be ruled out either. These volcanoes, along with other active volcanoes seen at the time like Loki Patera and Marduk, were observed until September 10. This data set showed that at each eruption, the surface age and area increased and the eruption temperature decreased, suggesting that the fire fountaining died off and lava instead erupted onto the surface inside insulated flows. Their data also suggest an effusive rate (total amount of lava erupted per second) at the peak of the Heno eruption that was nearly twice that seen at Rarog, despite Rarog appearing brighter. 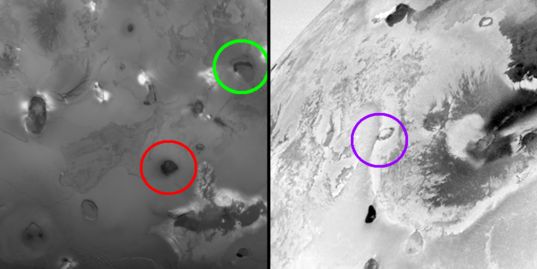 Each of the three eruption sites have been observed at moderate resolutions in spacecraft imagery acquired by Voyager and Galileo. Rarog and Heno were both best seen by Voyager 1 during its flyby in March 1979, when Io’s volcanic nature was first discovered. Both Heno and Rarog have significant amounts of dark material on the floor of shallow volcanic depressions known as paterae, suggesting earlier volcanic activity. In fact, both Heno and Rarog were observed as relatively cool “hot” spots by Galileo’s Photopolarimeter-Radiometer (PPR). However, no major eruption had been observed at either site. 201308C appears to originate from a volcanic depression with a bright floor with dark material along its southern and eastern rim. The best images of this volcano were taken during an encounter by Galileo in October 1999, including one image that was taken in a radiation-damaged mode. Both images reveal not only a volcanic depression, but a dark lineament running north-south from its southwestern corner that appears to be an extension of the patera’s western wall. Similar dark lineaments were the source of outbursts at East Girru in 2007 and Pillan in 1997. This dark lineament is also a bit closer to the calculated location of 201308C (29.1±1.8°N, 223.5±2.6°W). 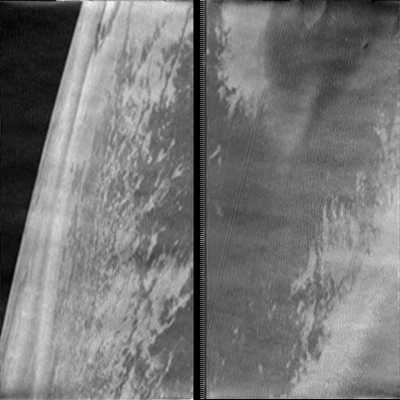 Medium-resolution image acquired by Galileo in October 1999 showing portions of the 201308C eruption site (near the limb toward the upper left). The frame was taken in a summation mode, that while reducing the amount of data that was required to transmit it back to Earth had been damaged the previous flyby, resulting in corrupted images that were partially reconstructed.

Galileo and New Horizons observed several outburst eruptions, mostly in the months after the eruption had quieted down, during their respective visits at Jupiter in the late 1990s to early 2000s and in February 2007, respectively. Most spectacularly, an outburst eruption at Tvashtar Paterae in November 1999 was observed up close by Galileo, revealing at 25 kilometer (15 miles)-long fire fountain, despite the fact that the spacecraft was only able to observe a few volcanoes during each flyby due to the spacecraft’s reliance on a low-gain antenna to send its data back to Earth (its high-gain antenna, shaped like an umbrella, failed to deploy properly). In nearly every case, plumes of gas and dust, or at least the rings of sulfur and sulfur dioxide frost they deposit on the surface, were observed at nearly every outburst eruption site either during the eruption or shortly afterward. While the data acquired by de Pater and her team was not sensitive to gas and dust plumes, we can presume that there is a strong likelihood that these eruptions did produce them.

These observations, as well as additional observations acquired in the months afterward, were made in conjunction with the Japanese Space Agency’s HISAKI satellite, launched in September 2013 and currently in low Earth orbit. HISAKI is being used to monitor the Io Plasma Torus, a ring of charged particles that shares Io’s orbit and is made mostly from gases coming from the moon’s atmosphere. De Pater and her colleagues are looking to establish a connection between variations in Io’s volcanic activity and changes in the Io Plasma Torus. The three large outbursts seen in August 2013 may have generated plumes that increased the amount of charged particles in Jupiter’s magnetic field. 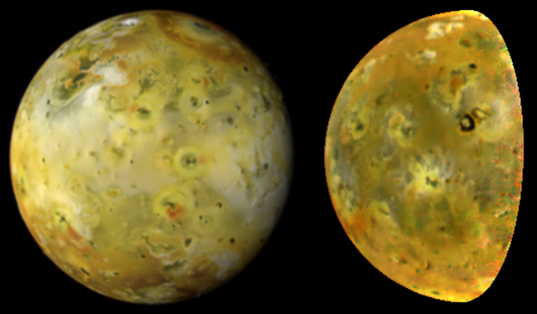 Observations by Galileo showing volcanic plume deposits left by outburst eruptions at Tvashtar Paterae in November 1999 and Grian Patera in June 1999. The image on the left, showing the Tvashtar plume deposit, was taken a year later in December 2000, while the image on the right, showing a faint red plume deposit surrounding Grian, was taken in early July 1999, only a couple of weeks after the start of the eruption.

With no Jupiter-system spacecraft that can observe Io’s surface in any real detail arriving for the next 15 years, ground-based (and possibly space telescope) observations will be crucial for understanding the long-term rate of Ionian volcanism both globally and at individual volcanoes (a companion paper by de Pater and Davies focused on the last decade of telescopic data of the volcanoes Loki Patera, Kanehekili Fluctus, and Janus Patera). It will also be important for interpreting surface changes seen on Io between a future Io mission and images taken by Galileo and New Horizons. While many of the changes seen at outburst eruptions, like thin plume deposits, are short-lived, the lava flows produced by these eruptions can be apparent for many years. Hopefully, we will not have to wait too long to do these comparisons. 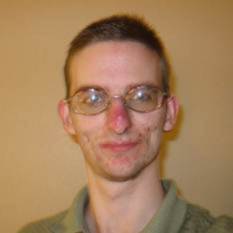 So clear pictures captured by W.M.Keck telescope with the AO... so amazing！