Early in the morning on January 13, 2014, a magnitude 6.4 earthquake struck beneath the Atlantic Ocean north of Puerto Rico, damaging Arecibo Observatory, the world’s largest single-dish radio telescope. The telescope is now operational after repairs and scientists have resumed observations. However, the future of Arecibo Observatory remains unclear due to funding uncertainties in the federal budget. 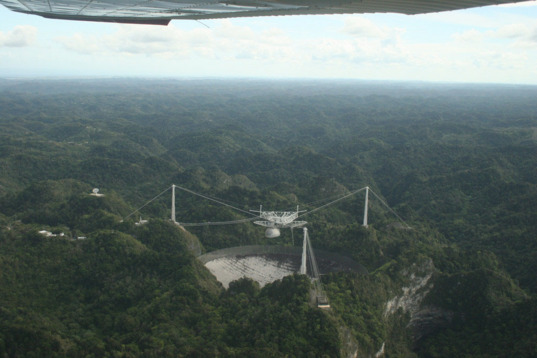 Arecibo Observatory from the air on March 10, the day before repairs to a damaged cable completed.

Earthquakes are common near Puerto Rico due to the island’s proximity to a large ocean trench. Arecibo Observatory, the world’s largest single-dish radio telescope at 305 meters across (1,000 feet), is situated in the hilly terrain in the central portion of the island. The day following the earthquake one of the 18 main suspension cables—supporting the 900-ton telescope platform hanging 150 meters (500 feet) above the aluminum dish—was found to be damaged. These support cables are hundreds of meters long and larger around than my arm. Three towers surround the 18-acre telescope dish and the telescope platform hangs at the center, suspended on these cables between the towers.

Three views of the damaged cable

1) view from the side; 2) view of the cable in its saddle at the top of the tower; 3) closeup of the damaged cable with portions unraveling.

Hanging in the high-humidity environment of Puerto Rico for over 50 years is one thing, and getting damaged by a magnitude 6.4 earthquake is another, but this cable in particular was already in a bad way: when the observatory was constructed in the 1960s, this cable arrived too short. The end was encased in zinc and spliced to another cable section, making this portion of the structure relatively rigid. When the earthquake hit, the cable began to unravel.

When the structural integrity of your observatory is compromised, you stop all operations and verify the safety of all structures on site. Ammann & Whitney, Arecibo Observatory’s civil engineers, came to assess damage to the cable and the rest of the site. The Visitors Center and the scientific offices were deemed safe, but until the cable was repaired, no one could go under the telescope, around the telescope, or up to the telescope platform. If the cable were to fail, analyses indicated that the failure could be potentially damaging to the telescope structures as well as any people unlucky enough to be near it. To go anywhere near the telescope, employees needed signed permission from the observatory director. Non-essential maintenance work ceased, pausing projects such as ionosphere study facility construction and regular maintenance to the planetary radar system. 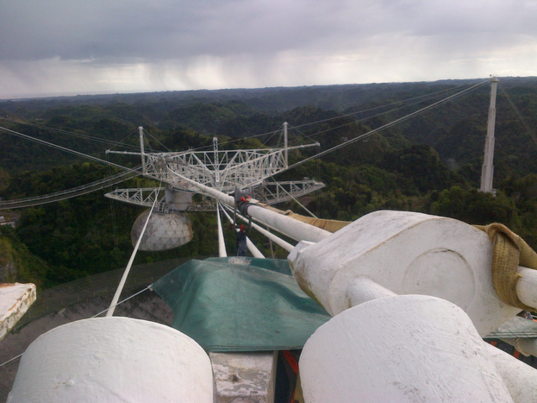 View from the southwestern tower of Arecibo Observatory

The damaged cable is on the left under the tarp.

In the meantime, some observing continued, but the telescope platform was restricted in its movements to not further strain the damaged cable. Atmospheric radar and pulsar drift searches could run as they do not require moving the Gregorian dome (pictured above to the left, center) or atmospheric antenna, or the giant azimuth arm (the arcing structure to which the dome is attached).

Using parts ordered from the U.S. and assembled at the observatory, we made a giant clamp to encase the damaged cable as well as the neighboring ones. This clamp is a strongback, secondary support to an existing structure. Installing the clamp was no small task: the southwestern tower with the damaged cable is 110 meters (365 feet) tall. While the James Bond film GoldenEye showed characters taking an elevator to the towers, the only way to access the tower top is by climbing ladder rungs set into the tower sides. Climbing the tower requires safety gear: hardhats, fall arresting gear. Arecibo staff members spent days hauling up equipment and tools to install the clamp. 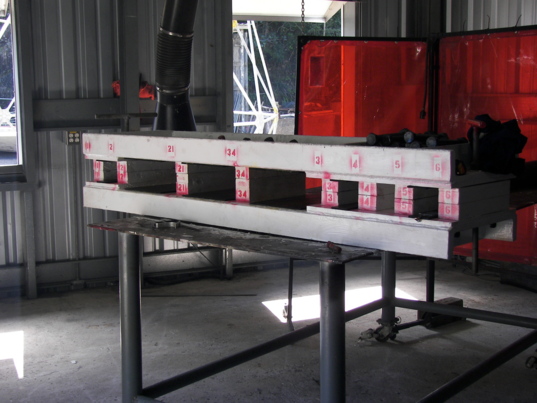 The clamp to hold the cables in place under construction in the Arecibo Observatory engineering building. 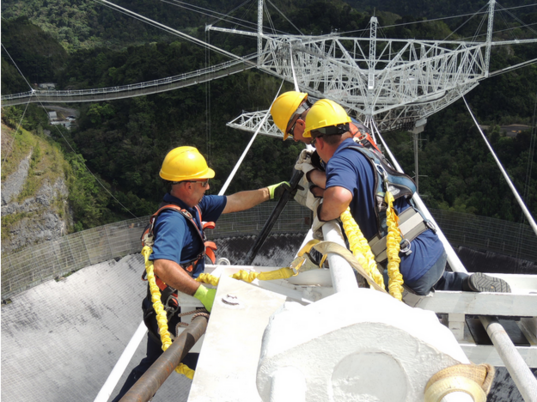 360’ above the ground with a giant wrench. Fall arresting gear and hardhats are required. 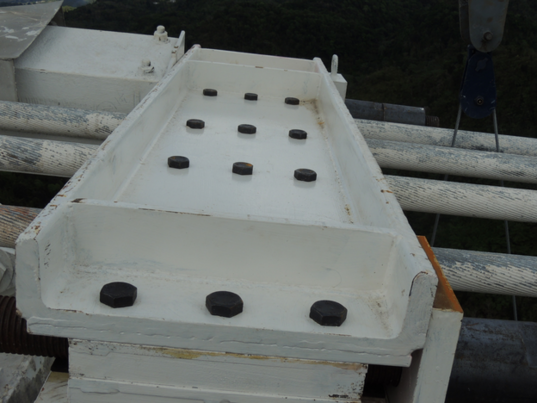 The clamp installed in place, preventing further unraveling of the damaged cable. Whether a new cable can be fabricated to replace the damaged one remains uncertain.

Repairs concluded on March 11 and the telescope became fully operational again. Usually during downtime we are able to repair other telescope subsystems, such as radio receivers and the radar transmitter, but the danger imposed by the damaged cable meant that non-essential repairs were paused. Thus, when we finally booted up the planetary radar system in anticipation of running on March 14, the system had several problems requiring debugging.

After two days and nights of watching my colleagues perform radar system troubleshooting, I woke up at 3:30 am to arrive at the observatory for a 4:30 am radar run on March 14. On our target list was 2000 RS11, a potentially hazardous asteroid recently observed by the Goldstone Solar System Radar at the Deep Space Network in Goldstone, California. Lance Benner and Marina Brozović sent us preliminary images of this near-Earth asteroid, and we hoped that we too would get a chance to observe this asteroid. Observations with radar would further refine this asteroid's orbit, and could rule out potential close approaches to Earth in the coming centuries and beyond.

The Arecibo planetary radar system worked, thanks to the efforts of our engineering and scientific staff, yielding delay-Doppler images of 2000 RS11, a “nicely weird” contact binary. We estimate that the asteroid rotates between once every two to five hours, and is between 300 to 800 meters across. 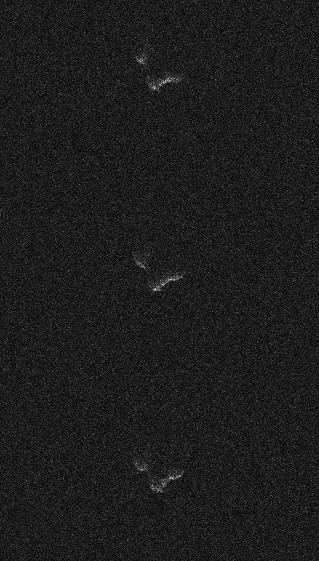 Three sets of delay-Doppler radar images of 2000 RS11 in all of its strange glory. Each delay-Doppler image is a stack of three 40-second transmission/receive cycles. The vertical axis is increasing distance from the Earth. Vertical resolution is 7.5 meters/pixel. As the object rotates between images you can see different portions of the contact binary move closer to the Earth.

Looking forward, Arecibo Observatory’s future both in terms of infrastructure and funding is not secure. A complete repair of the damaged cable would involve replacing the cable entirely. Engineers from Ammann & Whitney would install rigging to support the telescope while the damaged cable was removed and replaced. The cost of hanging rigging on top of fabrication and installation of a new cable could run into the millions of dollars. As the National Science Foundation (NSF), which owns Arecibo Observatory, cannot legally carry insurance on its facilities, there is no clear source of funding to carry out such a massive repair. NSF has a contingency fund for such repairs to its facilities, but if that is not available, the costs would have to come out of the general operating budget of the observatory. After having its budget cut throughout the last decade, losing a portion of the budget in the range of 25% would be devastating to the observatory.

A “Dear Colleague Letter” from the NSF dated December 20, 2013 puts Arecibo on a list of “telescope facilities that are viewed as being ready for formal consideration of divestment and related alternatives”. “Divestment” means the NSF could potentially sell Arecibo, but who would buy it? Who could afford to run it? Other alternatives could involve dismantling the facility, pending reviews this year.

The NSF recognizes the high quality of research and science that occurs at Arecibo Observatory (page 105 in particular), but lacks sufficient budget to support the facility. As Puerto Rico lacks a voting member of the United States Congress, we lack vocal congressional advocates for the continued operation of our telescope via sufficient funding for the NSF. Work done at Arecibo Observatory led to a Nobel Prize in physics, and in the present day we provide an essential service to characterize near-Earth asteroids and assess impact hazards. If you would like to see continued scientific results and asteroid monitoring done by Arecibo, please write your congressional representative and encourage them to provide sufficient funding to the NSF for Arecibo and other astronomical observatories. With your support, we can continue the astronomical, atmospheric, and radar observations for years to come that make Arecibo Observatory a world-class scientific facility. 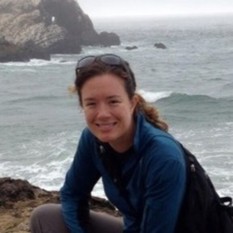 There's a typo about NEO 2000RS11... its size should read "between 300 and 800 metres" and not 'kilometres' as stated. Let's hope this wonderful observatory isn't impacted too badly for the forseeable future.

Our World is rapidly changing with all Darwinian consequences. Modern Science must learn to transition to it. No further dependence on overgrown bureaucracy is rational. So, have anyone from Arecibo called say Virgin Galactic or Gates Foundation or posted kickstarter campaign to see if grass-roots can contribute (I would)? That process should have started at the moment of 2013 announcement...