One Ocean World Among Many

This article was originally posted on The Huffington Post.

Click here to read an original op-ed from the TED speaker who inspired this post and here to watch the TEDTalk.

Just like ocean explorer David Gallo, I am also often astonished by the incredible diversity of the biology and geology of Earth's oceans. There really is a whole other planet down there, waiting to be discovered. I'm a planetary scientist, and in my field the Earth's surface, oceans, and interior represent the training grounds and jumping off points for the exploration of the other worlds around us. As such, while I'm astonished by the diversity of Earth's oceans, I'm absolutely floored when I stop to think that our beautiful blue ocean is only one of perhaps a half dozen or more oceans on other worlds in our solar system, and only one of probably millions (or more) oceans on other Earth-like planets in our galaxy. Oceans abound! 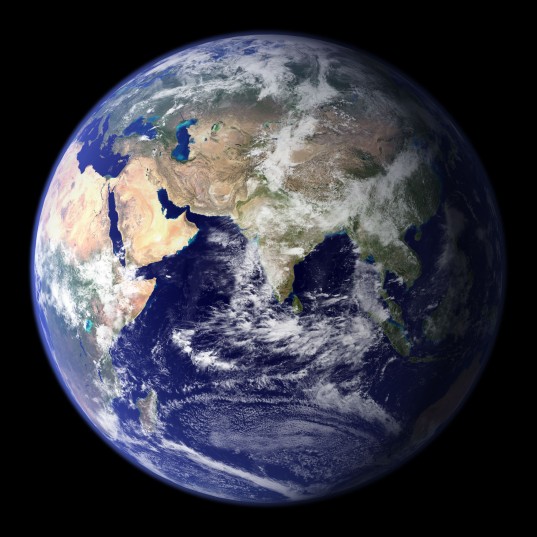 This spectacular "blue marble" image is the most detailed true-color image of the entire Earth to date.

Where are these other oceans in our celestial neighborhood, and what do we know about them? Planetary scientists have solid evidence that there are two among the large moons of Jupiter -- on Europa and Ganymede -- and some evidence that there may be another on Jupiter's large moon Callisto, and two more among the large moons of Saturn -- on Titan and Enceladus. Europa's was the first to be discovered, with its deep ice-covered ocean heated from below by the tidal energy of Jupiter and its other large, nearby moons. In fact, observations from the Voyager and Galileo space missions suggest that the salty ocean on Europa holds at least twice as much water as all of Earth's oceans combined! Warm liquid water, "geothermal" energy sources, and a putative abundance of organic molecules like those found on outer solar system comets and asteroids even suggest that Europa's ocean might be a habitable environment for life as we know it.

Europa's neighboring moon Ganymede -- the largest moon in the solar system (larger than the planet Mercury!) -- could also have a subsurface ocean, based on gravity and magnetic field data that are consistent with the presence of a thick, conducting layer of fluid (likely liquid water) under the icy crust. A new European Space Agency mission to Ganymede will launch in 2022 to try to find out for sure. Deep layers of liquid water -- subsurface "oceans" -- have also been tentatively discovered on Callisto and on Titan based on detailed analysis of their gravity and topography. For Titan, the possible presence of a deep liquid water ocean beneath surface seas of liquid methane, ethane, and other hydrocarbons would make that small planet an extremely more diverse, and strange, ocean world! And even Enceladus -- a tiny moon of Saturn that only spans the distance between Boston and Philadelphia -- has been found to be spewing jets of fizzy water and organic molecules from cracks in its icy crust, leading planetary scientists to suspect the presence of yet another subsurface ocean there. What heats the interior of such a tiny world to melt its icy interior is still a mystery. 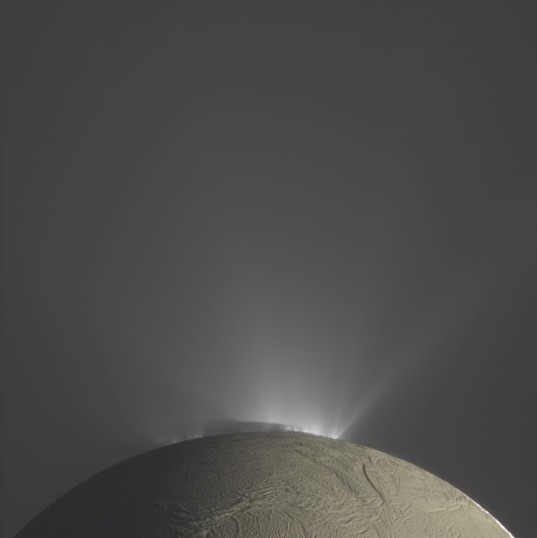 Fountains of Enceladus in Saturnlit color

Here is Enceladus, its south polar plumes lit by sunlight, its seamed nightside washed with the yellow glow of Saturnlight.

The surfaces of all these worlds are frozen over with thick crusts of ice. So the catch is that we've only "seen" their oceans indirectly, by studying the icy landforms on their surfaces, or by inferring details about their watery interior layers from magnetic or geochemical measurements. Imagine trying to explore Earth's oceans if our entire planet was covered by tens of kilometers or more of thick ice -- that's the challenge facing NASA and other space agencies as we strive to learn more about these exotic aquatic places.

It's also even possible that our nearest planetary neighbors, Mars and Venus, once had seas or oceans on their surfaces long ago. Some of that evidence is preserved on Mars as possible ancient shorelines and salty mineral deposits, although there is still much debate about whether there really was enough water there for the planet to have had an ocean as opposed to just smaller lakes and seas. But any such possible oceanic evidence has long been destroyed on scorchingly hot, dry, lava-covered Venus, where the "evidence" for a past ocean comes from the stunningly dry state of the atmosphere today (suggesting a lot of loss of water), and planet's overall similarity to the Earth, especially early in the history of the solar system (suggesting that it might have started with a lot of water).

Meanwhile, astronomers and planetary scientists are busily discovering hundreds of other planets around nearby Sun-like stars, including the first examples of Earth-sized worlds that are within the so-called Habitable Zone around their star -- at temperatures where liquid water could be stable on their surfaces, if the environment is indeed Earth-like. How many of those worlds have oceans as well? And how many of those alien oceans harbor strange and exotic alien life forms?

Earth appears to be just one ocean world among many. We should rightfully delight in and be astonished by the beauty and diversity of life within our own precious oceans. Now, we can also look forward to fathoming the depths of other ocean worlds around us, and being astonished by what we find there, too. What creatures might dwell in the warm depths of Europa, deep underneath the organic goo of Titan, or in the tide pools of some other blue planet hundreds of light years away? Won't it be fun to find out!

Hi JB -- Regarding your reference to Mars and oceans, I just read a ESA release about their Mars Express S/C which showed radar data indicating the the Martian south pole has a frozen over ocean which if thawed would cover he entire planet under approximately 35 feet 8 inches of water. I accidentally deleted the link yesterday or I'd place it here for you. Sorry. ESA's Mars Express team, if you have a contact, could help you with that I'd guess. This may be the person to contact: The MARSIS Principal Investigator is Prof. Giovanni Picardi, Universita di Roma 'La Sapienza', Rome, Italy.

I can't quite remeber -- Wasn't Venus' lost water volume determined by the Deuterium : Hydrogen ratio?, or something like that?

There's also a recent suggestion of subsurface ocean on Dione. But the real question is: why, why, oh why are we not spending multi-billions rushing off to these amazing places right now? Why are they not absolute top priority of ,and for, virtually all space-science and exploration??? If these oceans had been known before the start of the space era, or the space race, surely they'd have been the topic of endless fervid speculation, and they'd have been the "glamour" targets, the science fiction fantasisings, of generations, and central to the whole race from the start? Something has happened to the whole human race in recent years (everyone distracted by endless sex, drugs, partying and violence on TV?) that such amazing places, in our own back yard, trigger no interest! It's not simply because it's "hard" to meaningfully test them; that's not really true. Numerous features, on numerous moons, indicate some connectivity between the surface and ocean below. Given the sensitivity of modern instruments, the surfaces will surely retain some trace of any organics from below. The missions are not impractical, just expensive. But where's the public interest?

Apathy cannot over come effort this day in age of give me, give me, give. So the rest of us must suffer by doing without, at least at the Gov't level. The private sector is close to being able to do this without gov't funding. Just a few more years, say 3 or so with SpaceX. Maybe some one can buy a vehicle from them (heavylifter) and fly these missions yo mentioned. If you don't dream big to build something you will stagnate.

@Bob Ware: "The private sector is close to being able to do this without gov't funding." I'll believe that when I see it! Thus far all efforts to send a private sector soak probe beyond Earth have died a lonely death. Here are three examples 1) Back in the early 1990s a company called SpaceDev proposed a probe called NEAP (==Near Asteroid Prospector), originally slated to launch in 1996, which (had it eventuated) would have been the world's first private sector unmanned probe. Unfortunately, it never got off the ground. Read all about it at: http://www.permanent.com/spacedev-neap.html 2) LunaCorp was going to send a privately funded teleoperated rover in the Moon. It too never eventuated; and LunaCorp itself was dissolved in 2003. http://en.wikipedia.org/wiki/LunaCorp http://www.permanent.com/lunacorp-moon-rover-nomad.html 3) Then there was Applied Space Resources, which claimed it was going to send a sample return mission to the Moon (the "Lunar Retriever" as they named it), first in 2000 then (when that came and went) in 2002. http://www.spacedaily.com/news/lunar-98e.html Needless to say it never flew; and ASR's website has now vanished from the Internet As far as I can make out they all failed for much the same reason: they were unable to persuade investors to fund their missions. Now while none of this is to suggest that privately funded space missions beyond Earth orbit are a bad idea, such precedents do not exactly bode well for seeing such things any time soon.

Hey Stephen - For the most part unfortunately you are right. I am hoping that SpaceX can break that trend by providing opportunity for those very few who will actually be able to follow through.