Until recently scientists believed Mars’ atmospheric tides were predominantly diurnal, meaning there is one temperature minimum and maximum per Martian day. The new MCS observations have revealed a global, semi-diurnal tide, which means we see two temperature maximums every day—one in the middle of the day and one around midnight. During this twice-daily cycle, differences between maximum and minimum temperatures can be as high as 58° F (32 K). This is the largest tidal amplitude observed in the Martian middle atmosphere outside of a dust storm. 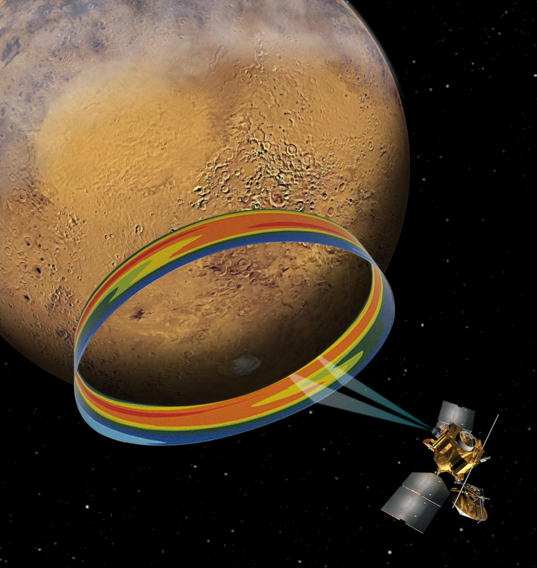 The Mars Climate Sounder aboard the Mars Reconnaissance Orbiter observes Martian temperature structures in the southern polar winter atmosphere. Red indicates a temperature of 170K; blue is 120K. Note that temperature maxima (red lobes) are occurring on both the day and night regions.

These measurements were made possible by a special MCS observation sequence. MCS is an infrared thermal emission radiometer, which allows it to take the temperature of the Martian atmosphere. It typically looks toward the forward horizon in the direction MRO is travelling (called “in-track”). MRO is in a sun-synchronous orbit. It takes measurements at local morning and afternoon times as it travels around the planet. For this study, we programmed MCS to swivel around its azimuth axis towards the left and right horizon (called “cross-track”). This allowed it to observe not only at different locations but also at different local times. A specially-designed sequence alternated in-track and cross-track measurements, enabling additional morning and afternoon observations.

Scientists have known about Mars’ semi-diurnal tides since the 1970s, but the twice-daily osciallation was thought to appear only in dusty seasons, when sunlight warms dust in the atmosphere. The new MCS data show that the pattern is dominant globally and year-round.

In order to investigate the cause of the semi-diurnal tide, we used a sophisticated computer simulation called a Mars General Circulation Model. MGCMs simulate the Martian atmosphere based on physical conditions like topography, atmospheric composition, and energy input. They are similar to the weather and climate models used for simulating Earth’s atmosphere. Our results indicated water-ice clouds are the driver of the semi-diurnal tides.

The Martian atmosphere has water-ice clouds for most of the year. Clouds in the equatorial region between about 6 to 19 miles (10 to 30 km) above the surface of Mars absorb infrared light emitted from the surface during daytime. These are relatively transparent clouds, like thin cirrus clouds on Earth. Still, the absorption by these clouds is enough to heat the middle atmosphere each day. Although we did not expect to see the twice-daily maximum temperature swings occurring away from the tropics, the MGCMs matched our observations when the radiative effects of water-ice clouds were included.

In order to accurately simulate global atmospheric temperatures and circulation, the MGCMs will require that the vertical distributions of cloud and dust and their radiative effects are taken into account. This is comparable to current challenges faced by weather and climate models here on Earth, which require modeling of clouds and other particles in the atmosphere to consider their effects on climate.

These results were published as a frontier article in the journal Geophysical Research Letters. JPL also issued a press release that summarizes the results. 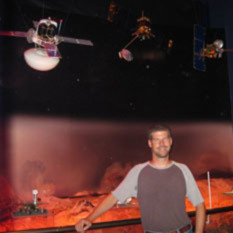 Great article! Thanks! Would the temperatures extremes contribute to the global dust storm distribution if the extremes in temperature, atmospheric pressure and the geology structures "aligned correctly" in some way, to carry the dust on a global pattern? If not is there another planetary method for the global distribution of the dust like we saw in November 1970 when Mariner 9 arrived?