On sol 3485 Opportunity pulled up next to a large outcrop here on the rim of Endeavour crater. The outcrop appears to be impact breccias like those we saw a few sols ago lower down on the ridge. But the texture of the rocks is somewhat different. So we will do a quick analysis and move onward and upward. In the next couple of sols we will drive on up the ridge to a place where we believe that we will spend some time "hammering" on some outcrops which orbital remote sensing has suggested consists of clays. 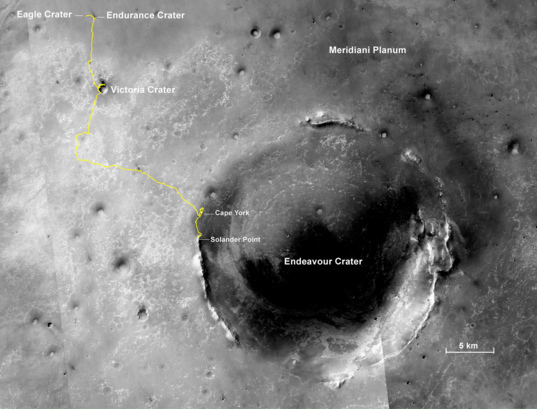 Above is the full 38.5 kilometers of traverse so far. You can see how we are moving south along the west rim of the ancient impact crater "Endeavour." The segment of the rim we are climbing right now is "Solander Point."

Back on sol 3365 we took this image of Solander Point as we approached it. Here I have plotted the subsequent route that Opportunity has taken in climbing up the ridge. The outcrop shown I the images below are near the end of the yellow traverse line. 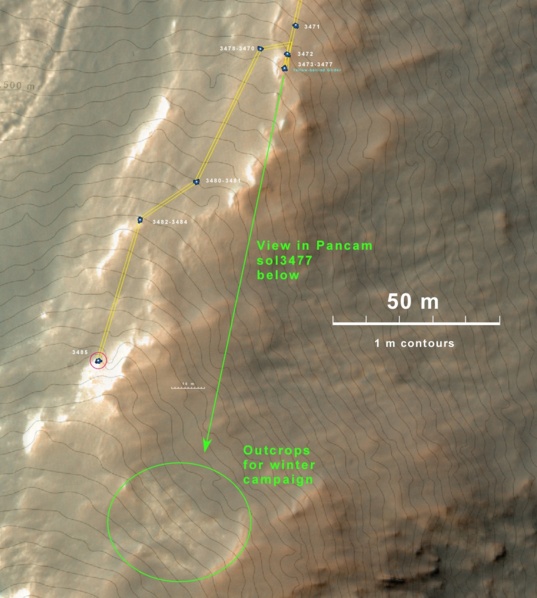 This is a look at the MRO/HiRISE orbital view of the last few drives along the ridge of Solander Point. The contours are 1 m. We hope to move south for the winter to the area of outcrops indicated. 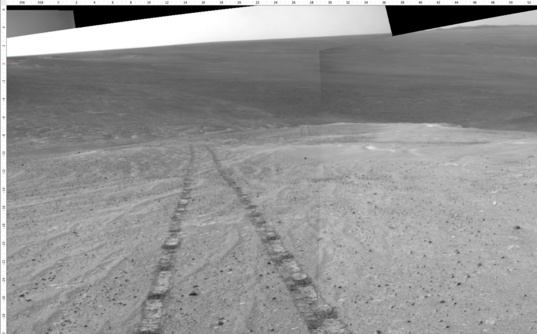 Looking back toward Nobby Head

This is the view looking back at our tracks as of a few sols ago. Note that the tracks appear over multiple rises as they dwindle into the distance down slope. That is the floor of Endeavour crater over on the right. On the left distance you can just make out Cape York and Nobby Head where Opportunity just spent some time before driving south to Solander Point. 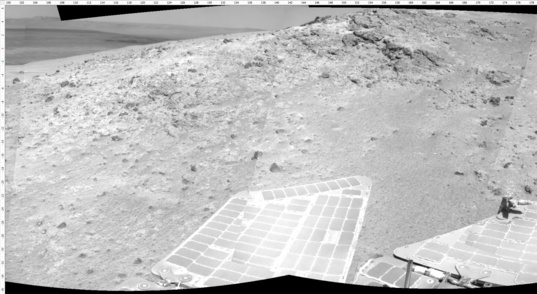 And here is a view of the outcrop where opportunity is now. This was just before a short "bump" forward to get some of the outcrop within the “work volume” of the rover instrument deployment device.

Can I suggest that this is one of the best information releases for the MER rovers since they landed? It has what's needed for the audience to be able to experience properly the "exploration" thrill: diagrams of exactly where the rover is now and exactly where it's trying to get to; and why it's trying to get there and what it plans to do. We can even see the differing texture of the rocks in the target zone in the image. Very often one or more of these ingredients have been missing from earlier info. The well-annotated overhead image, with a proper scale and even contours, makes all the difference, and there were heaps of earlier occasions around Cape York and the earlier craters where this sort of info would have been VERY much appreciated - but I can't actually recall much that was as apposite or illustrative as this simple diagram. (Curiosity is much the same). Can I even suggest that this is the main reason there aren't droves more of the public, or even scientists of all stripes, following the rovers on what should be some of the most amazing experience possible - no different from accompanying Columbus through his helmet-cam in 1492! What's been needed all along is more: "The rover's going here; but it can't get there tomorrow 'cos ...; here's the patch of sand dunes it has to avoid", etc, etc. For those without much experience of map-reading, geology, navigation etc, things have probably been pretty uninformative, confusing, and bleak.

Paul, these updates have been made since sol 3111 http://www.planetary.org/blogs/index.jsp?author_profile=433057268&page=2 , more than a year ago while Opportunity was still at Cape York.

Ditto... a great write up! : ) I'd love to see a stereo view down into the crater from the closest you'd dare go to the edge. Just remember to remember that the 'other side of the hill' drops into a very big hole in the ground. Hopefully the ground on that side is not soft/less cohesive thus subject to slide under weight or steep enough that gravity wins.

I'm not trying to say don't go. I'm all for going if we think we can. Go but you may want to probe the ground with the IDD before you go over the crest.