Planetary transits of the Sun by Mercury and Venus don't come along very often, and when they do we make a big deal of it because, well, it's really cool! The last time this happened was actually just last year when Venus passed across the face of the Sun. If you missed that then you're going to have to wait a while and lead a very healthy life, as the next Venus transit isn't until 2117! Mercury transits happen a little more often, most recently in 2006 and next in 2016, but are still in short supply.

So it might surprise you to know that there was actually a Mercury transit a couple of weeks ago, but not one single person on Earth saw it. Why not? Because it was only visible to the NASA STEREO-A satellite!

The NASA STEREO mission is actually two identical satellites that study the Sun, following the same orbit as Earth but with one satellite far ahead of Earth and the other far behind. Indeed, the satellites are referred to as the "Ahead," or "A," and "Behind," or "B" satellites, and right now they are pretty much on the opposite side of the Sun from Earth.

And so it was that between ~0200 and 0800UT on December 12, 2013, the Extreme UltraViolet Imager (EUVI) camera on STEREO-A witnessed Mercury pass right across the disk of the Sun, as seen in this YouTube movie.

Between ~0200 and 0800UT on December 12, 2013, the Extreme UltraViolet Imager (EUVI) camera on STEREO-A witnessed Mercury pass right across the disk of the Sun, as seen in this animation. The transit was not visible from Earth as STEREO-A is on the opposite side of the Sun.

Most of the images taken by this instrument are the 195-Angstrom wavelength, which corresponds to a coronal temperature of about 1.5 million degrees, but we did also get a few images in the 171A, 304A, and 284A instruments, and I put those together in this montage. You can find a full set on the NRL SECCHI/STEREO website. 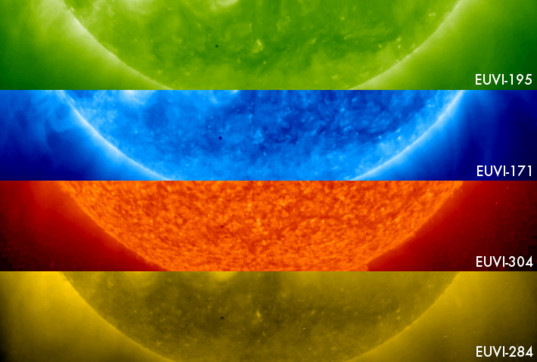 Between ~0200 and 0800UT on December 12, 2013, the Extreme UltraViolet Imager (EUVI) camera aboard the STEREO-A spacecraft captured Mercury transiting across the disk of the Sun. Most of the images taken by this instrument are the 195-Angstrom wavelength, which corresponds to a coronal temperature of about 1.5 million degrees, but it can also acquire images at 171A, 304A, and 284A wavelengths, shown here. You can find a full set on the NRL SECCHI/STEREO website.

While this perhaps isn't quite as exciting as a transit seen from Earth, it's still pretty awesome that we now have satellites that are on the complete opposite side of the solar system, looking back at not only the inner planets, but at Earth too!

One of the great things about having two observatories in such different locations in space is that the field of view is always something unique and exciting, with at least a couple of planets always visible, most notably Earth. So we always encourage people to seek out the STEREO data and see what celestial wonders they can find there!

While on the subject, one final point of interest regarding STEREO is that Earth has been continuously visible from STEREO since early in the mission, which was launched in October 2006. One of the most exciting transits of all will come in February 2015 when the two STEREO satellites will have their view of Earth blocked out by the Sun! For a few days we will actually lose all communications with the spacecraft as they pass each other on the exact opposite side of the Sun. At that point, I believe the plan is to roll the spacecraft by 180-degrees so that the instruments all point where they should, and the satellites will return to business as usual as they continue their orbit.

If it ain't visible from earth, it's not a real transit.