We're two weeks in to ‘Dancing with the Stars’ season 17, and Bill Nye has shown that, true to his TV-theme song lyric, "science rules" in the eyes of the audience. In week one, Bill and his partner Tyne Stecklein danced a Cha-Cha to the song 'Weird Science', while in week two, the pair formulated a Beethoven-themed Paso Doble.

No matter that the two received less than stellar judges’ scores for their dances, the most important story for me is how Bill’s performance has absolutely dominated the social media scene. Week one’s Cha-Cha became a viral hit on YouTube, receiving over 3.2 million views in just a week, and the video is appended by thousands of comments from fans expressing their excitement and support. (FYI...for those who are keeping track, this gives the pair the most watched dance in the history of the hit show.)  Bill's self-dubbed team name and associated hashtag, #HotKnowledge, was a trending topic on Twitter, and according to a statistic shown during the first week’s show, Bill and Tyne were the most talked about stars of the competition on Facebook. Oh, and despite being the lowest scoring team after two weeks, there seemed to be little suspense that the fans’ votes would keep “Team Hot Knowledge” around for week three. (They did.)

This outpouring of support on the internet has truly demonstrated Bill Nye’s impact in his role as a science advocate. The fact that millions of people (billions and billions even?) from around the globe have so warmly supported Bill as a competitor on this show highlights the value and importance he and science education play in the public’s lives. Consider the following:  even though the rest of the cast is comprised of actors, singers, and athletes, a clear fan favorite is the science promoter. I think that is pretty darn cool.

(Personal disclaimer: I was an elementary school student when the show “Bill Nye the Science Guy” aired, and I must have watched it every single afternoon, even if it was in reruns. Did my childhood TV-binge-watching habit have something to do with my current career as a planetary scientist? Most definitely.)

Unfortunately Bill tweeted late last night that his high energy Paso Doble left him with a partially torn ligament but that he also intends to keep on dancing. We wish him the best in week three and hope he heals at warp speed! 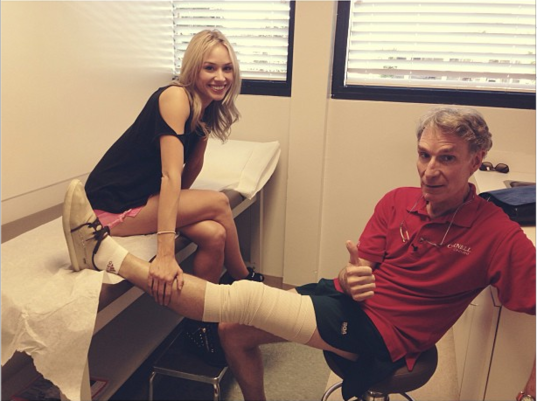