All exploration comes with both rewards and risks.

Back in 2005 and 2006, when Pluto’s second and third moons (Nix and Hydra) were discovered, searches by astronomers for still more moons didn’t reveal any. So the accidental discovery of Pluto’s fourth moon by the Hubble Space Telescope in mid-2011 (during a search for Plutonian rings) raised the possibility that the hazards in the Pluto system might be greater than previously anticipated. Those concerns were amplified when Hubble discovered a fifth moon in 2012. As a result of those discoveries, the New Horizons science and operations teams began to more carefully scrutinize the true level of hazards to our spacecraft at closest approach and devise mitigation strategies to make sure the encounter with Pluto would be successful. 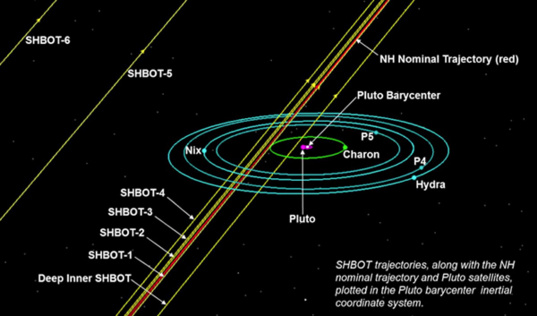 The New Horizons team studied numerous alternate flybys, called SHBOTs, before recommending to NASA a pair of backups to protect New Horizons from possible impact hazards in the Pluto system.

We’ve now largely completed that work and presented the results to both an independent, NASA-appointed technical review team, led by the Jet Propulsion Laboratory’s Keyur Patel, and then to senior executives at NASA Headquarters. Both groups have concurred with our findings, which I can summarize as follows:

Thanks to these three findings, we’re much more confident that unless something new and unexpected comes up between now and encounter, our current plan, which has been optimized to maximize the encounter science return, is to the best level of current knowledge, safe.

But to be still more prudent, we’re also implementing plans during the final weeks of approach in summer 2015 for New Horizons itself to search for hazards that we can’t see from Hubble or Earth-based telescopes. And we’ve also added “fail safe” data downlinks just two days and one day before the encounter to send home the best images and spectra stored on the spacecraft’s recorders, just in case our current estimates are wrong and we do lose New Horizons at closest approach. It’s always better to plan this way, just as the Apollo astronauts collected contingency samples right after stepping onto the moon in case they had to make a hurried getaway before their moonwalks could be completed.

And – just as every space shuttle mission included (but never used) plans to land after just one orbit of Earth if the spacecraft wasn’t healthy enough to continue – we are also prudently planning two alternate encounter sequences that we can upload to New Horizons as late as 10 days before closest approach, in the unlikely event that our hazard observations on final approach raise new cautions.

These backup encounter sequence plans are called SHBOTs, an acronym for Safe Haven By Other Trajectory.

Our first SHBOT is called GIS, for Generic Inner SHBOT. It continues on the nominal trajectory and aim point, but for three hours near closest approach, we repoint the spacecraft so its dish antenna can shield it from impacts. This pointing attitude, called Antenna to Ram (or ATR), would cost us some science because we won’t be as free to point the science instruments toward Pluto system targets during those three hours. But tests and modeling show this provides a factor of three to four times increase in success probability, and reduces the estimated loss of mission probability to about 1 in 1,000. 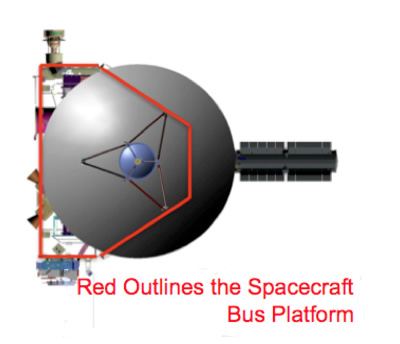 If necessary, the high-gain (“dish”) antenna on New Horizons can be used to shield most of the spacecraft from dust particle impacts during the Pluto encounter.

Our second SHBOT is called DIS, for Deep Inner SHBOT. DIS also uses the ATR attitude. It also directs the spacecraft toward a much closer encounter with Pluto – just inside 3,000 kilometers from Pluto’s surface, compared to the nominal encounter close approach of about 12,500 kilometers from the surface. Why go closer, not farther, to avoid hazards? Because if we go close enough, we can benefit from the fortuitous “drag clearing” of debris particles from Pluto’s extended upper atmosphere! DIS has more severe science impacts than does GIS, but there is a strong consensus among the team that it’s both the best choice if late-breaking news tells us the nominal trajectory is unexpectedly riskier than we’re comfortable with, and losing some science to execute Deep Inner SHBOT is far better than losing the mission to a lethal impact.

What I’ve briefly summarized here resulted from thousands of hours of work by many people on New Horizons and in the scientific community. They’ve been carefully scrutinized by the independent technical panel NASA set up at our request to peer-review the hazards analysis and mitigation plans we’ve worked on since late 2011, and approved by NASA Headquarters.

We’re excited to have these plans on the books and to begin testing both SHBOTs before the encounter begins so that they are ready to use if needed. When we launched we never imagined we’d be planning three separate encounters with Pluto, but that's what we’re doing!

Waking Up New Horizons for Summer 2013!

Before I close this column out, I also want to update you on mission status and other project news.

Currently, New Horizons itself is about 2.6 billion miles from the Sun, and only about 600 million miles from Pluto. Arrival at Pluto is just under 700 days away – still a long time, but much less than the nearly 2,700 days we’ve been traveling since launch!

New Horizons is healthy and on course, with all systems and science sensors working. On May 21, we’ll wake the spacecraft from its most recent, 100-plus day hibernation to begin a busy annual checkout, which will include thorough checks of all backup systems, instrument payload calibrations, and an update of our fault protection software with the next-to-last planned set of enhancements before we start the Pluto encounter in January 2015 – just over 19 months from now.

This summer’s wakeup will also include our most comprehensive on-the-spacecraft close-encounter rehearsal. For nine days, beginning July 5, New Horizons will execute all the activities of its final week on approach to Pluto, closest approach day, and then some of the post-encounter timeline as well. This rehearsal follows up on our successful encounter-day practice from last summer.

After the nine-day rehearsal, we’ll downlink a large amount of data through NASA’s Deep Space Network to evaluate how the rehearsal went, collect more cruise science data, conduct more spacecraft navigation tracking, and then put New Horizons back into hibernation on August 21 for another 4½ months, while the team works on SHBOT encounter sequencing.

Also this summer, we’ll be close enough to resolve Pluto from its large moon Charon using our long-focal length telescopic imager called LORRI. The first week of July is also the 35th anniversary of Charon’s discovery and – entirely by coincidence – we’ll be taking our first images of Charon at the same time of year that the moon was discovered, back in 1978!

One thing we won’t be doing this summer is a course correction. As in 2011 and 2012, our spacecraft navigation team has determined from tracking data that we’re on course and that there is no need to spend any fuel this way – a good thing!

Our mission team can feel the increased pace of activity as we draw closer and closer to 2015, and many of us are working much longer hours on this project than we did in early- and mid-cruise. To prepare for encounter operations to start in January 2015, we’ll add new staff to our science and operations teams. In fact, we’ve already made one very important addition by bringing in a deputy project manager, Peter Bedini, of the Johns Hopkins Applied Physics Laboratory. Peter was most recently the project manager for APL’s MESSENGER Mercury orbiter. New Horizons is privileged to have someone as talented and experienced as Peter on our team. So, welcome Peter to a spacecraft and encounter target that are a lot cooler than Mercury – in fact, about 600 degrees Celsius cooler.

As I close this update, I’ll just say thanks to all of you for following our journey across the deep ocean of space, to a new planet, and a truly new frontier. I’ll plan another update as we complete this summer’s intensive mission operations. In the meantime, be on the lookout for a news notes on our website related to this summer’s activities.

Until I write again, I hope you’ll keep on exploring – just as we do!

Thanks for the updated status T-700 D and counting...

Thanks for the update! As citizen scientist I have participated in the Ice Hunter (Zoouniverse) and in Ice Investigators (Cosmo Quest) projects, New Horizons is close to my heart, looking forward to 2015!

What a sweet journey it was, Alan; I felt bad reading the last line, as I wanted to go on reading. It was a pleasure reading your blog; learned few things on how to hold the interests of readers.