I'll just say this up front right now: whatever you read in the following blog post, please feel free to assume it is completely incorrect and the truth is actually quite contrary to what I'm saying. It has been - and continues to be - one of those days.

So this will be a relatively brief blog post because we're up to our necks in media inquiries and attempting to do real science to figure out the mystery that is comet ISON, and Matthew and I are basically the only ones that have abandoned our loved ones on this US national Holiday and continued to work. Here's what we know so far:

After impressing us yesterday, comet ISON faded dramatically overnight, and left us with a comet with no apparent nucleus in the SOHO/LASCO C2 images. As the comet plunged through the solar atmosphere, and failed to put on a show in the SDO images, we understandably concluded that ISON had succumbed to its passage and died a fiery death. Except it didn't. Well, maybe...

After perihelion, a very faint smudge of dust appeared in the the LASCO C2 images along ISON's orbit. This surprised us a little, but we have seen puffs of dust from Sungrazer tails, so it didn't surprise us enormously and didn't change our diagnosis. We watched and waited for that dust trail to fade away. Except it didn't.

Now, in the latest LASCO C3 images, we are seeing something beginning to gradually brighten up again. One could almost be forgiven for thinking that there's a comet in the images! 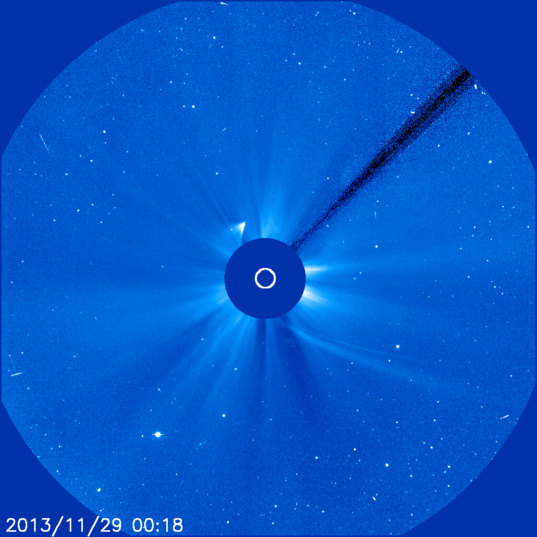 Comet ISON surprised observers on Thanksgiving day, 2013, by appearing to fade just before perihelion and then appearing to re-form a tail right after.

Matthew and I are ripping our hair out right now as we know that so many people in the public, the media and in science teams want to know what's happened. We'd love to know that too! Right now, here's our working hypothesis:

As comet ISON plunged towards to the Sun, it began to fall apart, losing not giant fragments but at least a lot of reasonably sized chunks. There's evidence of very large dust in the form of that long thin tail we saw in the LASCO C2 images. Then, as ISON plunged through the corona, it continued to fall apart and vaporize, and lost its coma and tail completely just like Lovejoy did in 2011. (We have our theories as to why it didn't show up in the SDO images but that's not our story to tell - the SDO team will do that.) Then, what emerged from the Sun was a small but perhaps somewhat coherent nucleus, that has resumed emitting dust and gas for at least the time being. In essence, the tail is growing back, as Lovejoy's did.

So while our theory certainly has holes, right now it does appear that a least some small fraction of ISON has remained in one piece and is actively releasing material. We have no idea how big this nucleus is, if there is indeed one. If there is a nucleus, it is still too soon to tell how long it will survive. If it does survive for more than a few days, it is too soon to tell if the comet will be visible in the night sky. If it is visible in the night sky, it is too soon to say how bright it will be...

I think you get the picture, yes?

We have a whole new set of unknowns, and this ridiculous, crazy, dynamic and unpredictable object continues to amaze, astound and confuse us to no end. We ask that you please be patient with us for a couple of days as we analyze the data and try to work out what is happening. We realize that everyone now wants to know if it will be visible in the night sky, and how bright it might be. We really hate speculating right now but if someone were to force us into an answer, we would reluctantly say that at least some faint tail remnant should be visible in the coming week or so. But this is highly speculative so please don't take this too seriously just yet. We will absolutely post updated info here as soon as we're more confident, and I will of course continue blogging when I can in the meantime. Just be patient on this and the truth will unfold in time!

And I just want to end on this note: not long after comet ISON was discovered, it began to raise questions. Throughout this year, as many of you who have followed closely will appreciate, it has continued to confuse and surprise us. For the past few weeks, it has been particularly enigmatic and dynamic, in addition to being visually spectacular. This morning we thought it was dying, and hope was lost as it faded from sight. But like an icy phoenix, it has risen from the solar corona and - for a time at least - shines once more. This has unquestionably been the most extraordinary comet that Matthew and I, and likely many other astronomers, have ever witnessed. The universe is an amazing place and it has just amazed us again. This story isn't over yet, so don't stray too far from your computer for the next couple of days!

So it appears that the Guru's are going to throw the SDO satellite under the bus..ISON's core will cool, it will regain it's Coma and a tail..Speaking of (Tales), once ISON blazes over the world and shows itself to be the Comet of the Ages there will be tales about how the so called experts of celestial events turned out to be absolute amateurs regarding ISON's fate at it's moment of Perihelion..Some advice to the GURU's, you should never sit in public conference and reaffirm the Alpha persons beliefs, think for yourselves, independent thoughts lead to empirical data..good luck blaming the SDO Techs....

I was watching the images from STEREO behind cor2 tonight. Excellent images of a brightening ison.. Still to early to tell whether the nucleus is intact but the images are awesome. Lasco. Has been less than exciting

So the RIP might have been carved to early into stone?

Whatever heating the comet got would have been limited to the shallow depths of what is left. If there is a residual nucleus, it may still progressively be warming up - think deep-fried ice cream.....

Could this simply be a SMALL asteroid covered in volatiles? Now we'll see the last burn off or refreeze until the next pass... if it gets one that is.

I see no mystery in ISON's behavior. The comet's volatiles vaporized prior to SDO, which is why SDO didn't see it, since dust doesn't glow in the EUV emission lines SDO is tuned to. The brightness of what is emerging now is increasing because the area of the rocky debris field is increasing in size as it disperses. There is no nucleus, and it is no longer a comet, just a meteor stream. It might still be an interesting early morning 'object'.

I enjoyed your participation in the Google+ Hangout yesterday, Karl. I had a couple of questions and observations. Since this is the first time we have seen an "sun-grazing" Oort Cloud comet, it's entirely possible that what has happened to Comet ISON is absolutely typical. What if these kind of comets always break up into chunks that settle into sungrazing orbits, and, having survived the crucible of the solar corona, they return until they burn out or break up. Perhaps the Kreutz Group of Sungrazers started out this way. Does the Comet ISON remnant appear to be on the same trajectory as its parent? And if it is, now that it has lost so much of its mass, could it settle into a sungrazing orbit rather than be ejected from our solar system as originally surmised?

Okay, the overwhelming evidence is what it is, I will have to concede that..In the end so long as science prevails is what matters..My humble apologizes I do extend...

I make a video of the Ison from images of C2 Camera. Colours are brightness.... You can see the dust of the comet to the left. http://youtu.be/Dbliw0BJ-mc