From October 6 to 11, two divisions of the American Astronomical Society - Planetary Science (DPS) and History - are meeting together for a combined annual conference. Despite NASA's messy restrictions on travel, a bumper turnout of over 800 people are expected to attend. Most of the meeting comprises 15-minute presentations where professional planetary scientists tell about their latest model of Venus' atmosphere, estimate of the output of Enceladus' plumes, or similar technical detail about their particular neck-of-the-woods in the solar system. But the AAS/DPS meeting is also an opportunity to interact with non-professionals.

A highlight of the DPS meeting is a public talk by this year's winner of the Sagan Medal, Donald Yeomans of JPL. You may have seen Don interviewed on TV or radio about recent asteroid near-misses or crashes. His talk is titled "Near-Earth Objects: Finding Them Before They Find Us" (also the title of his book, by the way) and he will speak at the Sheraton Hotel, Downtown Denver, at 7:30pm on Monday October 7th, in the main ballroom downstairs. This evening event is free and open to the public. We also hope to video record the talk and post online soon thereafter. 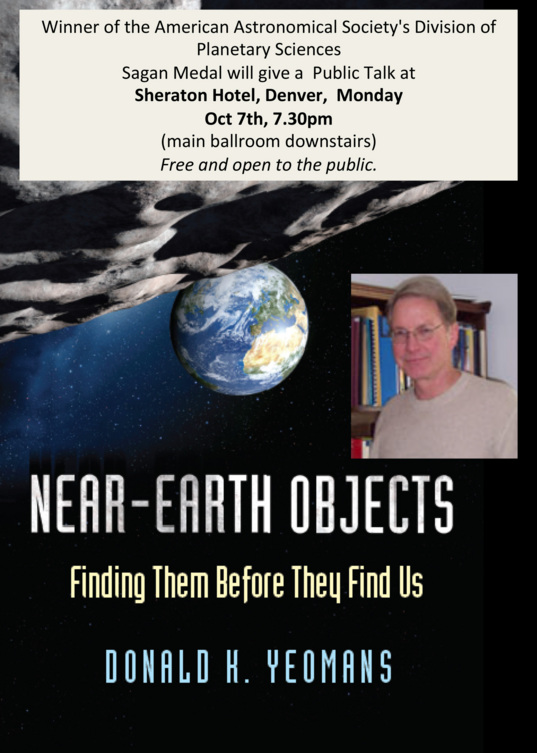 Near-Earth Objects: Finding Them Before They Find Us

Donald K. Yeomans, the winner of the American Astronomical Society's Division of Planetary Science Sagan Medal, will give a public talk on Oct 7, 2013.

We intend to similarly broadcast the other prize talks at the meeting:

...as well as several invited talks:

Most thrilling of these is likely to be the talk by David Morrison (NASA Lunar Science Institute) called End-of-the world scares - a joint Historical Astronomy Division and DPS talk.

In addition to several press conferences on latest planetary science results, we expect a web event for the Earth Flyby of NASA's Juno mission. The Juno mission to Jupiter will be flying past Earth around mid-day on Wednesday October 9th.  The large spacecraft (with three 30-foot solar panels) should be visible from the ground - but from over South Africa. We are planning some public and press events associated with this flyby but the specifics are not finalized yet. There is likely to be at least a Google Hangout online. Stay tuned on the DPS and Juno websites.

Finally, we are trying to bring together professional and amateur astronomers for an experimental workshop from 5:00pm to 10:00pm on Thursday, October 10. The intent of the workshop is to allow serious amateurs with equipment and observational skills to partner with professionals to collaborate on acquiring data. This is a two-way street. Many amateurs possess excellent image skills - we request they direct these skills to collaborative efforts.

In addition to professional presentations, we anticipate that there are many amateurs who have their own observing projects that they might like to share with everyone. The meeting will be free and open to all. We will open the DPS space to the public at 5:00 pm (while the poster sessions are running!) so that people can see the posters, talk with the DPS scientists and see the exhibits. The actual workshop will probably start around 6-6:30 pm.

It should be a fun week of Planetary Science in Denver. Look out for Emily's on-the-spot blogs. 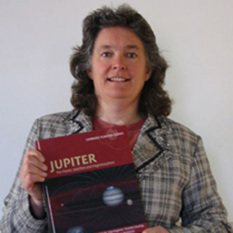 Professor of Astrophysical and Planetary Sciences, for Laboratory for Atmospheric and Space Physics, University of Colorado
Read more articles by Fran Bagenal