Australia comes of age in the satellite world

On April 9, the current Australian government announced the first formal Australian space policy (pdf). Why? Because Australia doesn't have a national space agency. A national space agency is serves as a coordination and clearinghouse department that can manage everything from agreements with other countries to funding for exploration and research. Instead, Australia's space activities have been scattered all over the place. For example, the Commonwealth Scientific and Industrial Research Organisation (CSIRO) runs the Deep Space Network dishes for NASA at Tidbinbilla, and individual universities go out and make their own one-to-one overseas collaborations.

Australia owns few of its own satellites. Instead, it rents access to observations and requests extra data from more than 600 satellites to obtain the information that holds together the fabric of modern life. These data include everything from GPS tracking of parcels and supply trucks as they travel for just-in-time supermarket ordering, to monitoring Australia's enormous Antarctic territory, to mapping the weather of an entire continent as large as the United States. These space-sourced essential services are worth more than $4 billion to the Australian economy. Until now there was very little idea of how all the applications fit together, and there was no overview of how they could be used better: in Aussie bureaucrat-jargon, a policy.

The previous government, who are now in Opposition, had no interest in having a space policy. The current government in Australia is that of the Labour party. In a burst of enthusiasm four years ago, they funded a number of quite big multimillion-dollar astronomy and space projects: Australian partnership for the Giant Magellan Telescope, support for the Australian bid for the Square Kilometre Array radio telescope -- and where we join the story, a fund of $40 million for a set of small space engineering projects, and a Space Policy Development Unit.

The Unit went around the many branches of government that use satellite data, everything from Geoscience Australia to the Bureau of Meteorology, and worked out how and where Australian government and industry used space technology. This took it a while. The Unit also had to look after the funds for the small research projects: these were quite varied and included a new, omnivorously-fuelled design of plasma thruster that could be used for interplanetary spacecraft; a scramjet test bed; and a project to use gravity maps from the Earth-orbiting GRACE satellite to trace the flow of water in the vast continent-spanning Murray-Darling river system. 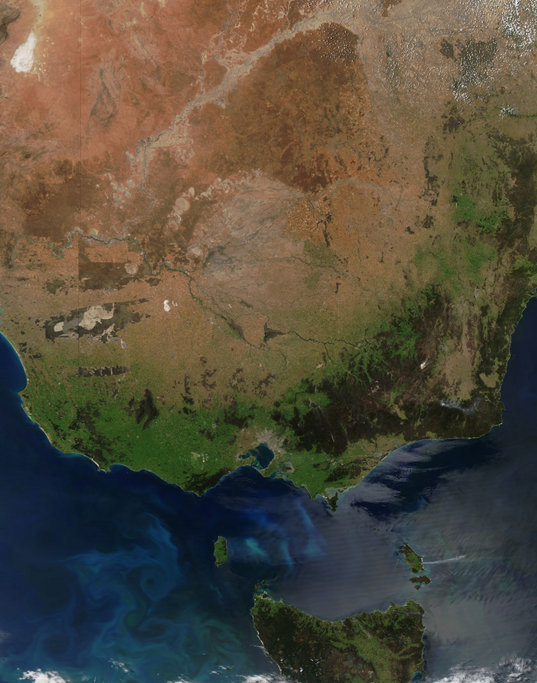 The Murray-Darling river system provides water to regions that generates a third of the value of Australia's agricultural production. Water balance across the river as groundwater reserves draw down in the drought-prone country has been monitored through data from the GRACE satellites.

So the Unit has now delivered its Policy, and fulfilled its reason for existing. It now has no money to administer, as the small research projects are wrapping up, and there won't be any more government money for it to administer appearing in the next year's Australian Budget, which is due in a few weeks.

Instead, the Unit is transforming into the Space Coordination Office. This unassuming name covers a set of key jobs that are vital for any country's space activities, and simply didn't have a place before. When JAXA, or the Indian Space Research Organisation, or NASA, or ESA want to set up a collaboration, that will be worked out by the Office. They'll also be involved when natural disasters strike, and treaties bring other countries' satellites and skilled workers into play to produce useful, vital information. The new Space Coordination Office will be the place to make it happen when an aerospace company wants to use the huge brand-new $30 million facility satellite that was built at Mt Stromlo Observatory as part of that burst of enthusiasm of funding. 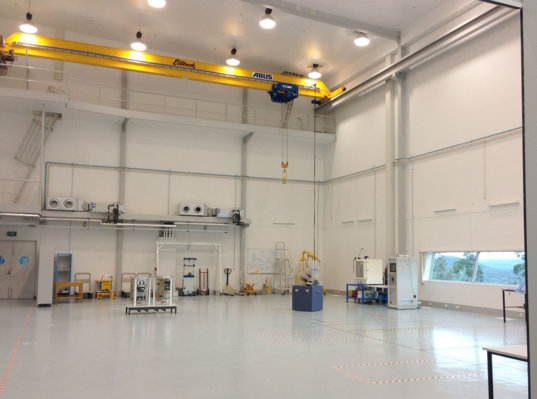 This facility was purpose-built to be large enough to assemble instruments for a 30-metre class telescope like the Giant Magellan Telescope, of which Australia is a partner. The Hall is part of a complex of buildings designed for building and testing of astronomical instruments and satellites. 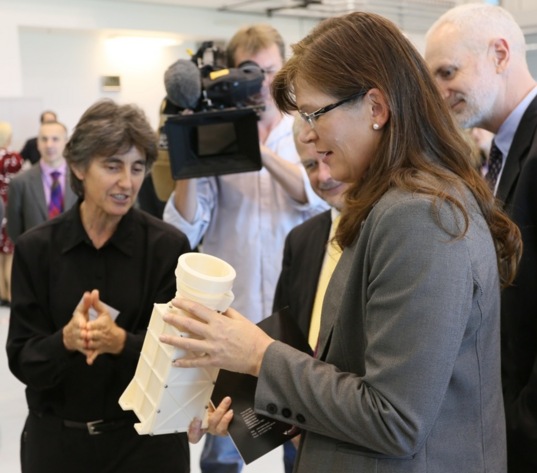 Christine Charles, Head of the Space Plasma, Power and Propulsion Laboratory at the Australian National University, explains her lab's design for a plasma thruster to Federal Minister Kate Lundy, who announced the new Australian space policy. Minister Lundy holds a full-scale resin printout of the plasma thruster from the Australian National University's new 3D printer; when machined in metal, the thruster will be tested in a new vacuum tank in the Integration Hall at Mt Stromlo.

What does this mean for planetary research in Australia?

The policy explicitly declares that there are a number of things it doesn't cover. It doesn't commit Australia to human spaceflight: no Aussie astronauts to the ISS. The government definitely remains welcoming toward any commercial venture that would like to build a spaceport or launch site, but won't be putting its Federal money towards development of a domestic launch capability for satellites. While there have been occasional proposals to develop launch sites in the north of Australia, where being close to the equator takes advantage of the Earth's rotation to make it cheaper to launch, none of the proposals have yet come through, and it's not economic to add yet another launch provider to an already well-supplied market.

The policy also excludes committing to "exploration of the other planets". Australia has a small but thriving planetary research community, with people working in astrobiology, atmospheres of other planets, planetary dynamics, Martian geology, comets and the tectonics of icy moons, to name a few. They are at universities and at government research institutes including CSIRO and Geoscience Australia. Their funding mostly comes from the competitive grants of the Australian Research Council. This new policy won't provide any funding: no new research support either there, or for support of the successful search for near-Earth asteroids of the Siding Spring Survey, which has nearly finished its funding and remains the only professional search for dangerous asteroids being made in the Southern Hemisphere.

What will this new space policy mean for Australia's future involvement in the international space community? That it's now clearly serious about coming to the table with satellite-building and -testing facilities, with government commitment to helping the fledgling Australian space industry link up with international partners, and a coordinated approach to using the Earth-observation data interwoven into day-to-day life. Many representatives from other countries attended the policy announcement, including the Indian Ambassador. It also offers the first stepping stones to future Australian planetary exploration involvement. One day, or sooner if a keen company wanted to try testing a new piece of engineering technology in space and provided its own funds, there could be an Australian instrument flying on a collaborative mission to explore another planet.

Thanks to Dr Naomi Mathers for background on this article. Michele Bannister recently completed her postgraduate study on the worlds of the outer Solar System at the Australian National University's Research School of Astronomy and Astrophysics, and is now a postdoctoral fellow with Canada's National Research Council. You can find her chatting about planets at @astrokiwi. 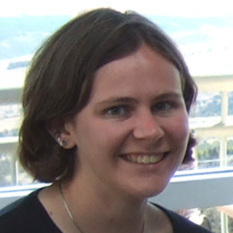 I have several comments. 1) First, (and with all due respect), governments tend to have policies with the same sort regularity that cats have kittens and hens have chickens: it's kind of an expected inevitability. Secondly, was it REALLY necessary to inject an element of partisanship into a subject (space policy) where it would surely be in everyone's best interests for that subject to be approached in a NON-partisan fashion? To be sure, the "previous government, who are now in Opposition" seems to have had "no interest in having a space policy". But then the same could equally have been said about the current (Labor Party) government, a government which has been in office since early December 2007. By my count, that's five years and four months. That is kind of long for an incubation period, especially when what does get hatched by the policy mandarins is described in a document less than 25 pages in length. If the mandarins have been beavering away at it since 2007, that would give us a rate of around five pages per year, which as a bureaucratic productivity rate is not exactly something to go round boasting about. More likely, of course, the hatchling was only conceived in rather more recent times, prior to which the present government had no greater interest in space matters than the maligned Opposition. Which in turn raises the question of how long this sudden burst of interest is likely to last? I mention that partly because of the federal elections due later this year, an election the present Labor government seems likely to lose. If it does, then given the non-interest of the Opposition that space policy would seem doomed to vanish into oblivion. At least if said policy continues to be regarded asthe LABOR PARTY's space policy, as distinct from AUSTRALIA'S space policy. If oblivion is to be avoided would it be better to treat the policy in NON-partisan terms, and therefore one which both sides of politics can work towards irrespective of who sits on the government benches in Australia's House of Representatives? As a footnoteto that, I notice that the new Space Coordination Office does not get a mention in that PDF you linked to (although a Space Coordination Committee does), suggesting that the SCO is not exactly a key component of Australia's space policy, and therefore an entity not destined for a long life span. 2) Then there was this comment in the article: "The government definitely remains welcoming toward any commercial venture that would like to build a spaceport or launch site, but won't be putting its Federal money towards development of a domestic launch capability for satellites.." The notion of a commercial spaceport in Australia has been around since at least the mid-1980s (remember the one that was going to be at Cape York? And the one that was going to be out on Christmas Island in the Indian Ocean?), thus far without any tangible result. Such a lengthy gestation does not exactly encourage the belief that any Australian spaceport will EVER be built, let alone any time soon, which in turn raises the question of whether being merely "welcoming" is sufficient? I note that all of Australia's major AIRports have been bullet with government money. If governments had sat back and waited for private enterprise to come along, not only to build them, but to do so with their OWN money, then one has to wonder whether any of the existing major airports in Australia, let alone any of the regional ones, would have been built at all, at least before the rise of large-scale international tourism, especially given the size of Australia's population? But then airports are nowadays treated as PUBLIC infrastructure whereas commercial spaceports seem to be, at least in the eyes of Australian governments, being viewed more like a factory or a supermarket: as private sector infrastructure. It's all a bit like Australia's fast train projects. People talk about them and say what a good idea they'd be. You even have actual proposals put forward. But they never actually get built.