Astrophotos making the web - the good, the bad and the ugly ...

Editor's note: Daniel Fischer originally posted this entry on his blog last month. I think the issue of the gradational boundary between a space photo and space art is an important one, especially in the context of my advocacy of amateur image processing, so I asked his permission to repost it here. --Emily Lakdawalla

There is an unfathomable universe of wonderful and genuine space images out there on the web (of which my blog is striving to bring you all those related to current sky events). Yet it's sometimes the heavily manipulated or even completely manufactured pictures that "get viral", labeled as and/or understood to be sensationally good real images by scores of watchers.

One such case was covered here three months ago, when a composited view of the May annular eclipse was distributed as a seemingly real image (see the translation of that tweet) and went viral in Japan and then around the world: even 'prominent' astronomers, including a hard-core space scientist (whom I won't name), initially fell for this fake and tried to explain its optical oddities. 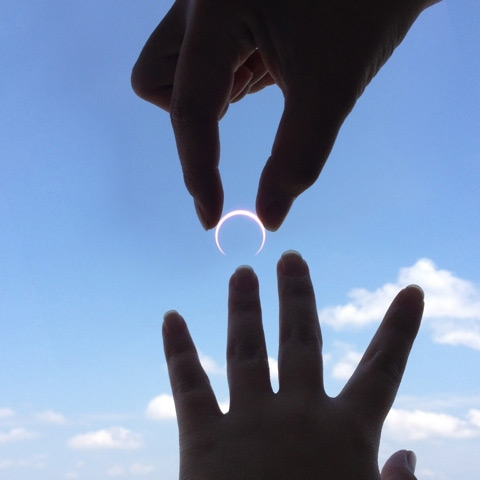 By wacamera, shared under a Creative Commons Attribution-No Derivatives license

This is a composited photo, composed entirely on an iPhone: the two hands are from separate images, and the eclipsed Sun from a third. The creator, "wacamera", explains the compositing process in his blog. The image went viral, and most people who shared and forwarded it did not realize it was a composite.

Another example, very recent, is this alleged photo of a sunset with sunspots and a Paris skyline - which a major science organization also distributed with a caption implying a real photo ("Taken at sunset September 2, 2012 in Paris ..."). Of course it isn't: The Sun is way too round for one touching the horizon, and its limb is brightened instead of darkened as it is in reality: obviously a montage, and one that anyone familiar with real sunset images can only consider bizarre in its stark unreality. And now read the comments under the Facebook entry: many took the picture for real and celebrated the assumed photography skills at work here.

Now, why care about severely manipulated or completely made-up sky pictures widely assumed to be real? Isn't space art yet another great way to convey the beauty of space? If labeled as such: of course it is! But the issue here is what Australian astronomy popularizer Ian Musgrave has termed "sky literacy": the ability to understand what's happening in the sky (and getting inoculated against severe misinterpretations of celestial happenings that others may shamelessly exploit). Unscientific fake images like the setting round Sun with the bizarrely brightened limb may seem only a small detail here (not recognizing Venus or other normal naked-eye sky phenomena is much more troubling), but we in the astronomy outreach community should behave responsibly on every level, shouldn't we?

A 'borderline case' in this regard is a famous solar photographer who gets great H-Alpha images like this recent one - only to invert the greyscale on the disk but not of the prominences every time: a very confusing (and neither helpful nor, in my humble opinion, aesthetic) process that has confused more than one professional astronomer desparately trying to understand what's going on - and leaves the broader audience in the dark, literally. Explaining narrow-band solar images is hard enough, but here a level of confusion is added without need.

The nonchalance with which many in the astronomy community are ignoring the issue of misleading space pictures on the web - let alone celebrating them - is disturbing, especially given the increasing awareness of image manipulation in real life and news media in particular. Here at least the professionals try to strive for the moral high ground: For example a manipulated - by NASA! - image from the Apollo 11 mission should be deleted, they say, from all image archives. Photojournalists have given themselves ethical guidelines, and not so infrequent scandals like a recent one in Austria with a 'spiced-up' photo from Syria underscore their necessity. The only astrophotographical organisation I know that has similar guidelines is The World at Night where all compositing is banned; unfortunately their - still developing - rules aren't online yet. Would it be too much to ask for astronomy outreach activists to at least try to stick to a similar standard, clearly labeling artwork as such? And, if available, always use genuine photographs of the sky - of which there are so many outstanding ones around anyway. 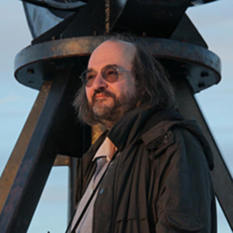 I am constantly responding to my email friends who send me amazing astrophotos because they know I'm a space nut. I usually have to reply and say "That's not real." I try to do it nicely, so I can keep my friends, but the war against ignorance goes on and will maybe never end! :-(

There are so many pro landscape photographers that have an unreal moon (lighting , size, location). There's one guy who took photos of Yosemite Falls while facing north, mind you, and added an enlarged full moon to each shot and sells these expensive prints. There's no way I'd own a landscape with the moon next to Polaris! My pet peeve.