Editor's note: this is an update on Chang'e 2, China's second lunar orbiter. The spacecraft left the moon last year for the Earth-Sun L2 point, and is now heading towards asteroid Toutatis.

The story of the tracking of the Chang'e 2 probe actually begins with images taken by a Catalina Sky Survey (CSS) telescope at the Mount Lemmon Observatory in Arizona. CSS scans the skies near each new moon, looking for asteroids and comets. The emphasis is on finding asteroids that might hit the earth.

One problem in doing this is that to a telescope, an asteroid and a probe or piece of space junk look very much alike. Each appears as a slowly moving "star" in the image. Fortunately, Earth-orbiting objects are usually moving very fast and in certain ways that enable them to be recognized as man-made right away. But high-orbiting probes and space junk can be tougher to classify right away.

On 2011 June 27, CSS found an object that wasn't fast enough to be obviously artificial. It was given the temporary name SM999CF and was found in seven images taken over the course of a little more than an hour. The positions of the object in those seven images were posted on the NEOCP (Near Earth Object Confirmation Page). The NEOCP is a service provided by the Minor Planet Center, the folks who collect and process almost all observations of asteroids; it makes it easy to post your observations of "interesting" objects so that other people can follow them up, confirm that they are real, and improve the knowledge of the orbit of the object.

In the case of SM999CF, several observatories got images and measured positions, much as with any "real" asteroid. But after about a day, it was clear that the only orbits that fit the observations took the object close to the earth, but traveling more slowly than asteroids usually do. 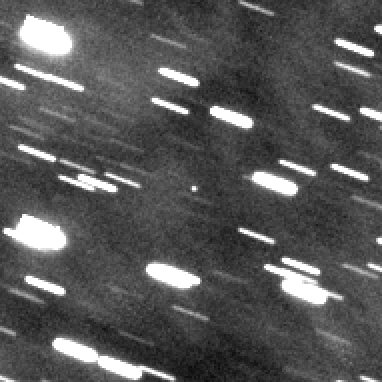 A 15-exposure image stack capturing Chang'e 2 on its way to asteroid Toutatis, captured by the 0.4-meter Schmidt-Cassegrain telescope at the Great Shefford Observatory in West Berkshire, England. The images were captured on August 18, 2012.

Looking more closely at the orbit, it was also clear that SM999CF had recently been very close to the moon. In fact, so close that it seemed as if it had been launched from the moon on June 9, about three weeks earlier.

This seemed very unlikely, of course. A little on-line searching of recent lunar missions revealed that Chang'e 2 had been orbiting the moon, but had left it on June 9, exactly the time SM999CF had been "launched" from the moon. So SM999CF was identified as Chang'e 2.

(This sort of thing is common, by the way. For some man-made objects, positions are computed and available to us. In most cases, a little sleuthing has to be done to identify them.)

Chang'e 2 was observed several more times as it headed out to the Earth-Sun L2 point, then again as it did a few small maneuvers to keep in place. (An object at L2 is unstable, and will drift away from L2 unless it makes some small maneuvers every now and then.) The last observations were in March 2012.

Then we learned that, in April 2012, Chang'e 2 left the Earth-Sun L2 point for a flyby encounter with the asteroid Toutatis. This flyby was supposed to occur on 2013 January 6.

This left us with only a vague idea as to where Chang'e 2 might be. However, I was pretty confident that somebody would stumble across it in the course of looking for asteroids, and I was right. On 2012 August 8, the PanSTARRS survey in Hawaii got four positions of a slowly-moving object, and posted their data as object P103T8L. As with SM999CF, several observatories got additional data, and our knowledge of the object's orbit quickly improved.

After P103T8L had been observed for 36 hours, I could tell from the orbit that it was almost certainly man-made. The orbit was very earth-like; it was leaving the immediate neighborhood of the earth, but just drifting away slowly. There are not a lot of objects that meet this description, and I thought it might be Chang'e 2.

While I didn't have any set of predicted positions for Chang'e 2, I did know where it had been on April 15 (the day it left L2) and that it was expected to fly past Toutatis on 2013 January 6. So first, I computed a position for P103T8L for April 15. It was a decent match for that of Chang'e 2. And computing a position for mid-December showed that P103T8L would be somewhere around Toutatis, though not especially close.

The problem was that observations covering only 36 hours didn't provide a rock-solid prediction. So I tried something a little different: I added in an "observation" for April 15, based on where we knew Chang'e 2 had been. Suddenly, I had "observations" running all the way from April to August and a much more reliable orbit. It showed that P103T8L would fly past Toutatis sometime around 2012 December 12 at 09:00 UT.

The bad news was that every source I'd seen said that the flyby would occur on 2013 January 6, and there was no way that I could see P103T8L doing that. However, I'd never really understood the January date anyway. In mid-December, Toutatis will be a mere 7 million kilometers away, closer than it will be for some years to come. By 2013 January 6, it'll be 28 million km away. A flyby on that date would require more fuel and make communication more difficult. (Especially for China, which hasn't done deep-space communications before.) So I was about 99% certain that P103T8L was indeed Chang'e 2, and that the flyby would be in mid-December.

To remove that last 1% of uncertainty, I explained the situation on the Minor Planet Mailing List (MPML) and asked if somebody could get a few more observations of this object. This would extend the 36 hour stretch, or "arc", of observations to a one-week arc.

A few days later, Peter Birtwhistle, who observes from the Great Shefford Observatory in the UK, got three images and measured the position of the target in all three. With these additional positions, I refined the flyby time to be on 2012 December 13 at 08:27 UT. In theory, this should be right to within a few minutes. In practice, I'd be reasonably sure the Chinese will do some maneuvers, and maybe even throw things off by a day or so. But I'm now sure the flyby will be in mid-December.

A four-frame animation of Chang'e 2 on its way to Toutatis, captured by the 0.4-meter Schmidt-Cassegrain telescope at the Great Shefford Observatory in West Berkshire, England. The image set was captured on August 28, 2012.

very interesting article and analysis, thank you! I have got some more informations from a Chinese source, and he informs me that four course corrections are planned in order to precisely target the flyby, which will take place 7 million kilometers from Earth (which confirms your analysis). unfortunately, I was not told what the planned flyby distance is. the relative speed will be about 11 km/s.

Are the Chinese being secretive about this mission? Why?

Bill, fantastic analysis and write up, thank you for that! @fthurber Aren't the Chinese secretive about everything? :)