Since you last visited, Opportunity has continued to drive downhill – well, what passes for ‘downhill’ on Cape York! – and is now not far at all from the northern edge of the Cape. From where she is now she sees the Meridiani desert stretching away to the north and west, the eastern hills on her right, and the Cape itself behind her. And around her? lots and lots of Homestake-like gypsum veins. So far she hasn’t spotted anything big enough and blocky enough for her robot arm to plonk its instruments on, but it won’t be long, surely…

So, where are we? Here we are – at the end of the yellow line…

Directly ahead, there are somevery interesting dak rocks just off the edge of the Cape, which I can best show you in 3D…

To get here, Oppy rolled down the northern end of Cape York’s rocky ‘spine’, bypassing the rocky outcrops she spotted from Greeley Haven. I love this view which shows the undulations of the landscape over Oppy’s shoulder. You can imagine, can’t you, Oppy bumping and trundling up and down, up and down, as she headed down towards the bench where she is now…

I’m sure we’ll have some lovely close-up views of a gypsum vein soon. There will be a pause in posts here for a few days now, but we’ll catch yup with Oppy again soon, ok?

Other recent Road to Endeavour posts: 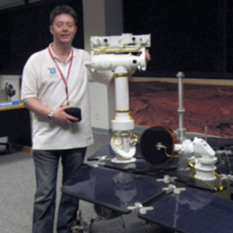