The nights are getting warmer; it won't be long until summer comes! With summer near, many astronomers are dusting off their telescopes and preparing to take advantage of good weather. This summer should provide great opportunities for stargazers to view planets, meteor showers, the transit of Venus, and for some, the annular solar eclipse. Check out these highlights of what you can look forward to this summer. If you need help locating any of the objects listed, download Stellarium, a free, open-source planetarium for your computer.

Venus is still shining brightly in the early evenings, while Jupiter is lost in the Sun’s glare. Orion has all but set in the evenings, while a magnitude 1 Saturn is in the southeastern skies. Mars can be spotted in the south at about magnitude 0. On May 20th, observers in China, Japan, the Pacific Ocean, and the western portion of the United States will be able to catch the 2012 annular solar eclipse. While the listed locations have the best views, it will be possible for observers in Asia and most of the rest of the United States to catch at least a partial solar eclipse.

You can obtain more information on the May 20th eclipse from NASA’s eclipse site. Remember, NEVER look at an eclipse without proper eye protection.  Astronomers without Borders is offering “eclipse glasses” for sale. Not only do the glasses provide an enjoyable viewing experience, but you’ll also help support AWB’s efforts. Since the annular eclipse coincides with the new Moon, the weekend of May 19th/20th will also be a great time to check look for your favorite “faint fuzzies” in the night sky.

Early June brings with it a full Moon on the 4th. Observers located in Asia, Australia, the Pacific Ocean, and the Americas will be able to observe a partial lunar eclipse, however the main event of June is the highly anticipated transit of Venus on the 6th (the 5th, for observers in the Americas). The last transit took place in 2004, and the next transit visible from Earth will not happen again until 2117! The visibility for the transit is pretty decent, with only those in the eastern portion of South America, and the western portion of Africa unable to observe the event. NASA’s eclipse site (link to  ) has additional information including peak viewing times, and additional maps.

At magnitude 6, Uranus will be visible in the East before dawn, along with Jupiter at magnitude -2. Late in the evening, the summer triangle of Altair, Deneb and Vega becomes visible low in the East (check after 9 PM local time). For those who are fortunate enough to have dark skies, the Milky Way is visible after about 10 PM, stretching from north to south. For those without extremely dark skies, the Milky Way may be indistinguishable from high altitude clouds. With time and practice you’ll learn the difference. Those who are new to viewing the Milky Way may find a pair of binoculars to be useful. The Moon enters its new phase on the 19th and the summer solstice is the next day on June 20th.

A full Moon kicks off the month on July 3rd, while Mercury is visible low in the west, just after sunset. Saturn and Mars make their way into the western skies during late evening. During the first part of July, early risers can catch Jupiter, Venus and the Pleiades in the east during pre-dawn hours. The Moon reaches its new phase on the 19th, and following that is the Eta Aquarid meteor shower, peaking during the 28th/29th. Wait until the Moon sets (after 1AM local time) and look to the East, towards Aquarius for best viewing. You’ll also be treated to the Milky Way at zenith, directly overhead. By month’s end, Orion will be visible just before dawn. 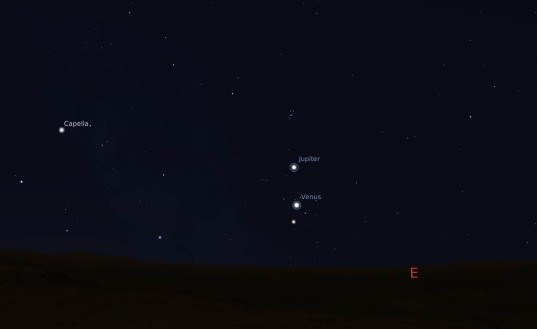 View of Jupiter, Venus and The Pleadies just before dawn during early July 2012

August begins with a full Moon on the 2nd, and interestingly enough, ends with a full Moon on the 31st! The highlight of this month is the Perseid Meteor Shower, which peaks around the 12th. Last year’s showing was diminished by  a nearly full Moon, however this year’s showing will have a good window of viewing from 11pm until about 1 AM local time before a waning crescent Moon rises. Shortly after the Persieds, on the 17th, the Moon reaches its new phase, and Neptune will be at its closest approach to Earth on the 24th. At a distance of 29 AU, and magnitude 8, you’ll need good skies and a decent telescope to spot our most distant planet. 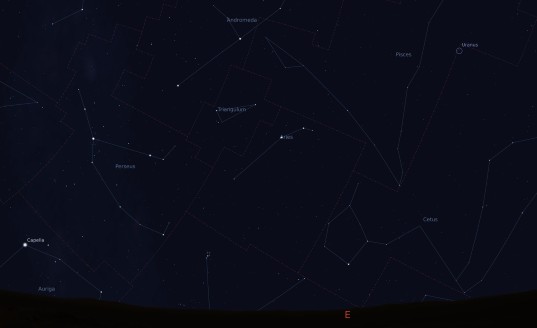 View of Perseus at midnight local time around August 12, 2012