Icelandic amateur image processor Björn Jónsson just posted this to unmannedspaceflight.com and I thought it was so spectacular that I had to post it -- and his explanation -- here directly. It never ceases to amaze me what can be pulled out of this 30-year-old data.

EDIT SEP 28: Welcome to everyone arriving here from Bad Astronomy and GeekDad. If you like what you see below, I suggest searching this site on Björn Jónsson's name. If you're hungry for space photos, search on Gordan Ugarkovic and Ted Stryk.—ESL

This is a new, big mosaic of Voyager 1 images, this time showing the Great Red Spot at high resolution. The contrast and sharpness have been greatly exaggerated. [Visit unmannedspaceflight.com for a version without this exaggeration.] 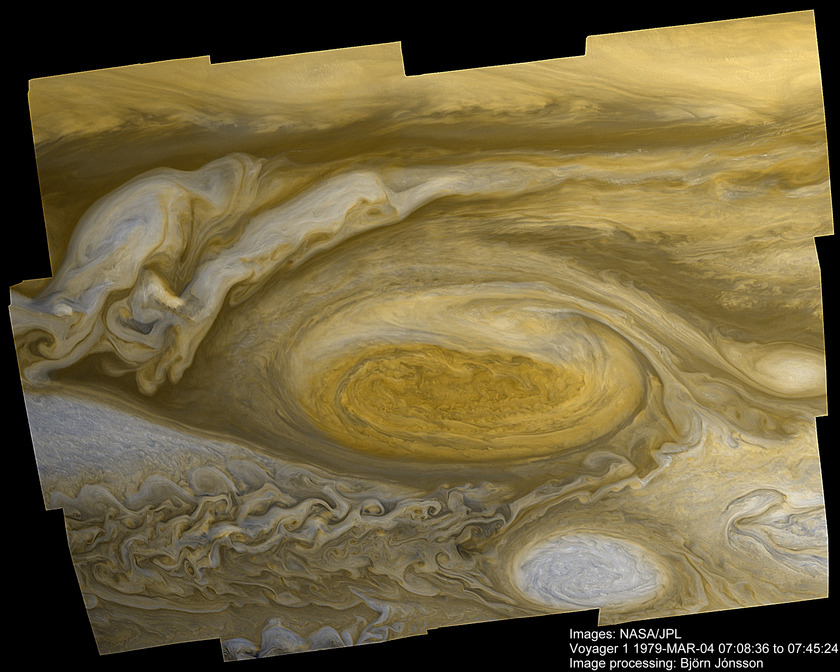 Voyager mosaic of the Great Red Spot of Jupiter

This is a 4x3 mosaic of images. The processing is almost identical to the processing described for my previous Jupiter mosaic so I'm not describing it further here. One caveat though: There is probably some slight geometric distortion but it shouldn't be a problem in this case.

Mosaics of some of these images have appeared before as 'official' image releases but interestingly, only three-by-two-frame mosaics were used in all cases. The official mosaic can be seen here. There is a false color version (lots of blue color) that is better known.

My new mosaic reveals an enormous amount of details, especially in the sharpened version. Some of these details I didn't know were visible in any images of Jupiter until relatively recently. The sunlight is coming from the east (right) and because the Great Red Spot is in the southern hemisphere it's really coming roughly from the east-northeast over the Great Red Spot and the regions south of it. With this in mind, vertical relief and cloud shadows are -- I think -- visible at many locations around the Red Spot's periphery. I have marked them on the key below. 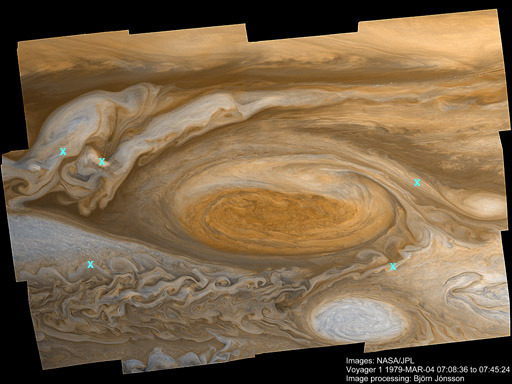 Voyager mosaic of the Great Red Spot of Jupiter (labeled)

The blue "X"s on this version of Björn Jónsson's Great Red Spot mosaic mark cloud features that might display shadows from vertical relief of the clouds.

This is the highest resolution color mosaic completely covering the Great Red Spot that I have ever seen. Galileo didn't obtain Great Red Spot mosaics at this resolution and Cassini passed too far away from Jupiter. This image looks sufficiently different (and better!) from the old, official versions that in a way I feel like I'm processing stuff from a new planetary encounter when I see this. We will probably not be seeing anything comparable to this until EJSM (or some future spacecraft) starts orbiting Jupiter. Hopefully it will be carrying a camera capable of obtaining even higher resolution images than this from the distances it typically images Jupiter at high resolution.

Interestingly, the orange and violet images I used here were followed by a green-filtered Great Red Spot mosaic about 40 minutes later. However, I couldn't use these and was forced to create a synthetic green channel from orange and violet channels because some of the clouds (especially in the northeast periphery) moved so fast that the three color channels couldn't be properly aligned if I used the green images.

We should really come up with a better name for that thing. We give names to our storms here on Earth; why should we treat Jovian storms differently? But we'd better come up with something good, since it's likely to be around for a long time still...