Planetary Society volunteer Ken Kremer witnessed the launch of Space Shuttle Discovery on its STS-131 mission to the International Space Station in person and filed this report on the successful mission. Thanks Ken! --ESL

After a one-day weather delay due to excessive cloud cover, Space Shuttle Discovery fired its braking rockets, plunged down from orbit and streaked across the American heartland for a picture perfect landing yesterday (Tuesday, April 20) at 9:08 Eastern time at the Kennedy Space Center. The landing capped a 15-day assembly mission to the International Space Station by the seven-person crew. 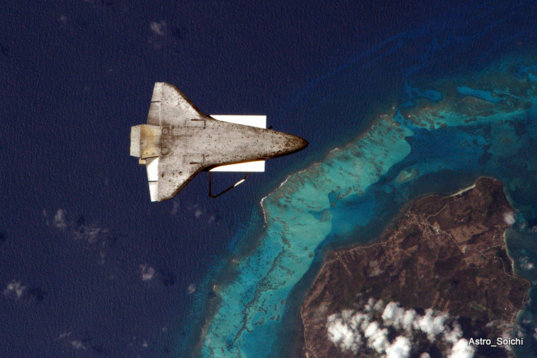 Discovery over the Caribbean

The space shuttle Discovery flies on its penultimate mission with its payload bay facing Earth so that the astronauts and cosmonauts onboard the International Space Station could survey and photograph it following the relative separation of the two spacecraft on April 17, 2010. See more of Soichi Noguchi's photos on Twitpic. 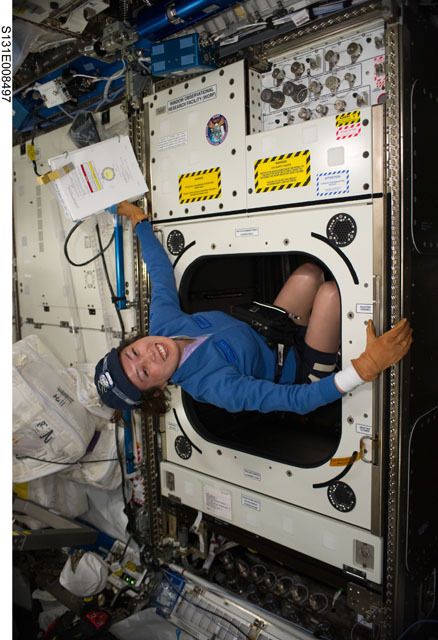 WORF on the Space Station

Japan Aerospace Exploration Agency (JAXA) astronaut Naoko Yamazaki, STS-131 mission specialist, works with the Window Observational Research Facility (WORF) in the Destiny laboratory of the International Space Station while space shuttle Discovery remains docked with the station on April 10, 2010. WORF will provide cameras, multispectral and hyperspectral scanners, camcorders and other instruments to capture Earth imagery through Destiny's nadir window. WORF is, indeed, named for the Klingon character from the television series Star Trek: The Next Generation.

The STS-131 mission delivered more than 7,700 kilograms (17,000 pounds) of science supplies and spare parts packed into the Leonardo resupply module. Leonardo was nestled inside Discovery's cargo bay as the primary payload along with a 1,700-kilogram (3,800-pound) ammonia cooling tank. The supplies aboard Leonardo included 16 science and stowage racks, the fourth crew personal quarters and the Window Observational Research Facility (WORF) science rack. WORF is a dark room intended for high resolution remote sensing of the Earth from space. Middle school students from across the world will be able to participate in an educational space outreach program with WORF. The kids will be able to remotely control the EarthKAM digital camera mounted inside WORF. 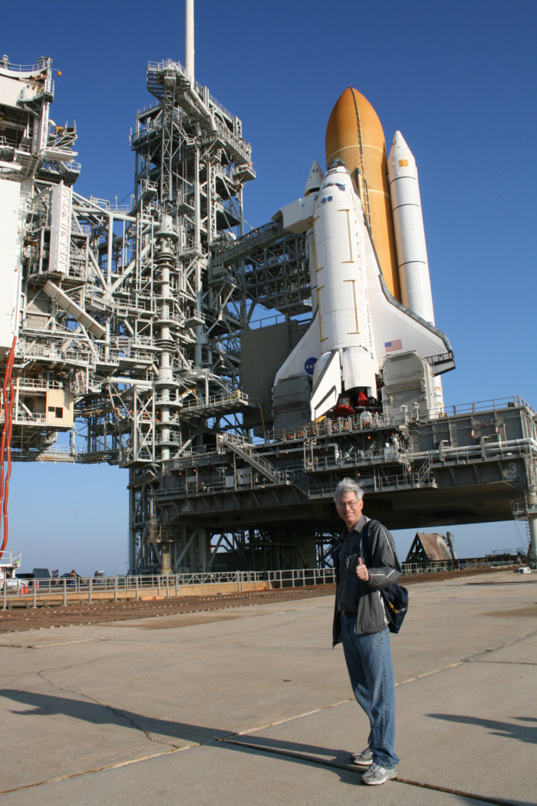 Ken Kremer and Shuttle Discovery on top of Launch Pad 39 A at the Kennedy Space Center for rare media photo op during pre launch operations.

During pre-launch operations I had the opportunity to inspect the Leonardo resupply module, inside the Space Station Processing Facility at Kennedy Space Center and take a quite rare and absolutely thrilling visit to witness Discovery close up from directly on top of Launch Pad 39A as the giant payload canister was delivered to the massive pad structure.

Shuttle Discovery roared to orbit on April 5 at 6:21 AM EDT, just before dawn. Fifteen minutes before blast off, the ISS made a spectacular overhead pass directly in front of the Moon. I watched Discovery turn night into day for miles around as it ascended off the pad. Sprinkles of sunlight cracked through the horizon in the last moments before liftoff.

The sights and sounds of the rumbling thunder made it the loudest and most magnificent Shuttle blastoff I have witnessed from the press site at KSC, located some five kilometers (three miles) from launch pad 39 A. Other media and NASA officials I spoke with said it was one of the best launches ever. Large crowds of onlookers witnessed the spectacular night launch from beaches and parks nearby and there were many reports of folks feeling shockwaves. I clearly saw the twin solid rocket boosters being jettisoned after their burnout about two minutes into the flight.

Discovery's flight included three spacewalks to swap out and install the ammonia cooling tank. This was the second of the final five planned flights until the space shuttle program is retired at the end of 2010. Only three launches remain -- one of each of the three remaining Shuttles.

Upcoming launch schedule, according to NASA: