Buzz Aldrin on Dancing with the Stars: Week 3, and that's it

Time to finish my remote sensing lab, start my geodynamics problem set, and watch... (pause for dramatic effect) Dancing with Stars! Despite having the lowest scores for the last two weeks on ABC's hit show Dancing with the Stars, moon man Buzz Aldrin made a safe re-entry into this week's show, shielded from the heat of the judges by the audience vote.

This week, the dancers were given the challenge to tell a story through their performance. While I may have chosen to tell the story "Goodnight Moon", Aldrin and his partner Ashly Costa made the (wiser) decision to act as a solider coming home from war to his daughter. The two performed a tender and heart-felt waltz to "What a Wonderful World." You have a give Aldrin a lot of credit for choosing the waltz -- for a man who's used to counting 3-2-1, he did a good job switching it up and counting 1-2-3 instead.

Unfortunately, while the judges found the dance charming, they criticized Aldrin's technique and gave the dance the lowest score of the evening -- 13 out of a possible 30. Aldrin graciously accepted the criticisms and stressed his emotional connection to the dance. We'll just have to stay tuned to see if this emotion is enough to carry Aldrin through to the next round...

Our favorite astronaut has moonwalked off the dance floor, and we want to thank him for showing us that you're never too old to try something new. This is my last post -- I hope you've enjoyed reading these little interjections of space-related pop culture. Now back to that geodynamics problem set... 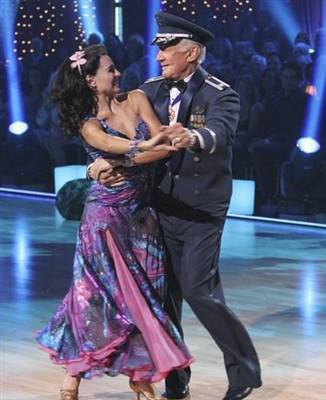 Buzz Aldrin and Ashly Costa on 'Dancing with the Stars'

After earning the lowest scores of the week with their waltz, astronaut Buzz Aldrin and pro partner Ashly Costa are voted off "Dancing With the Stars."