Buzz Aldrin on Dancing with the Stars: Week 1

Editor's note: OK, so reality television is not the normal topic of this blog and I'm willing to bet that 99.9% of my readers are glad for that. But we could not let Apollo 11 astronaut and American hero Buzz Aldrin's appearance on the ABC reality show "Dancing with the Stars" pass without comment. I am hopeful that he'll remind the show's huge audience not only of where we have been in space, but of the places we have yet to go.

Fortunately for me, I discovered while attending the Lunar and Planetary Science conference that former Red Rover Goes to Mars Student Astronaut Abigail Fraeman, who is now a first-year graduate student at Washington University in St. Louis working with Ray Arvidson on spectroscopy of Mars and its Moons, is a big fan of the show. So I asked her to write up a blog entry on each episode for as long as Buzz is a contestant. Thanks so much, Abby! --ESL

This past Monday night Apollo 11 astronaut Buzz Aldrin appeared as a contestant on the ABC television program "Dancing the Stars," where he showed off the dancing skills he first perfected as a cadet attending "hops" at West Point (as in, "let's go to the hop.")

For those unfamiliar with the show, its format is fairly straightforward. Each week, a group of celebrities perform a ballroom or Latin dance with a professional dance partner assigned to them. After each dance, a panel of three judges critique and score the couples, and these scores are combined with phoned-in votes from television viewers to determine who gets to progress to the next week. The celebrity with the lowest total score at the end of the episode is eliminated from the competition.

This week, Buzz "Lightfoot" Aldrin and his partner Ashly Costa performed the cha-cha to Sam Cooke's "Cupid (Draw Back Your Bow)". Aldrin certainly won the award for "most exotic fan-base location" when the astronauts aboard the International Space Station wished him good luck. I wonder... does the phrase "Standard text messaging rates apply" apply to astronauts as well?

After viewing footage showing Aldrin rehearse in a swanky astronaut t-shirt, we saw the self-described risk taker emerge to perform live in smart red shirt with a black sparkly vest. While his dancing steps may have been held down a bit by Earth's gravity, Buzz certainly looked like he wouldn't let that stop him from having a great time on the dance floor. As the last notes of the song sounded, Aldrin was greeted by applause from the audience that would have given the roar of a Saturn V rocket a run for its money. One of the judges, Carrie Ann Inaba, remarked to Aldrin, "You inspire people to get out and do what they're afraid to do"

Buzz and Ashly earned 14 points out of a possible 30 for their dance, which narrowly puts them in last place by a single point. This week's score will be combined with the audience vote and a chance at another dance next week (no contestants will be eliminated this first week) to see who will get to progress to further rounds.

Aldrin, a true American hero both for his work in walking on the Moon and in pioneering the original moonwalk, proved Monday night that even at 80 years old he still has the right stuff. 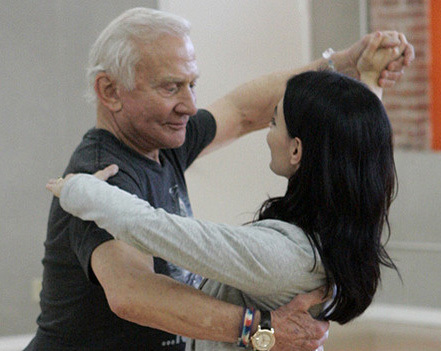 Buzz Aldrin rehearsing in 'Dancing with the Stars'

Buzz Aldrin, astronaut, scientist/inventor, bestselling author, advocate for man's future in space, Buzz Aldrin is considered one of the greatest heroes of space exploration. He partners up with Ashly Costa (formerly DelGrosso), who returns for her fourth season.