We wrapped up the landing site workshop on Wednesday afternoon by revisiting each of the four sites and discussing them in turn. Unfortunately, the way that we did this was very disappointing, and made for a frustrating afternoon.

The discussion was centered around a word document that was projected up on the screen in the room. Over lunch, the meeting leaders had conferred and listed what they thought were the key points for each site that everyone agreed with, along with areas of future work. But they should have known that getting a room of 200 scientists to agree with something is nearly impossible, and it didn't help that their list of points was a mish-mash of actual, irrefutable observations (e.g., "there are strong clay mineral signatures at Mawrth", or "there is a huge layered mound at Gale") and complete speculations (e.g. "the delta at Eberswalde preserves organic molecules" or "the layered rocks at Holden are likely lake deposits") and everything in between. 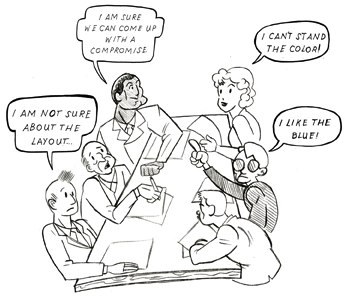 The result was that we spent most of the afternoon going through this document line by line and debating word choices and phrasing and grammar. It was incredibly frustrating, to the point where I almost had to leave the room. By the end, there were probably only five or so people actively participating, while everyone else in the room silently suffered through watching this document being written by committee.

After the discussion, we did end up with a central hypothesis for each of the sites, along with a list of future work.Gale was the first site we discussed, so a lot of the time was spent figuring out how we were going to do this document editing as a group. I also was on the edge of my seat because my adviser was off the the side telling me that I should chime in. I always get stressed out when I'm expected to comment or ask a question when I don't really have a comment or question to make. In the end I asked about the wording of one of the bullets that said Gale has a "relative paucity of fluvial channels". Because it actually has tons of them. But apparently "relative paucity" meant "there is more volume in the mound than could have come from those channels" so the sentence was not edited. Those two things mean different things to me, but I didn't press the point. 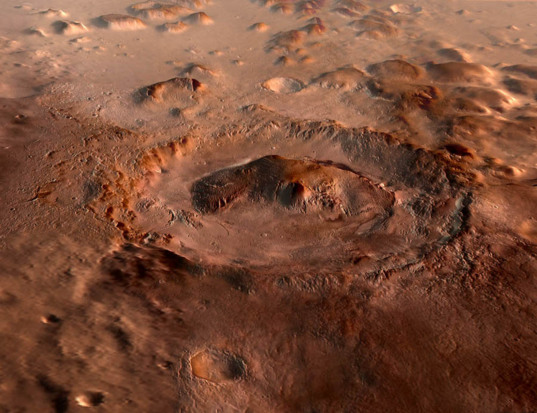 Anyway, all of that meant that I didn't take careful notes for Gale, but the final hypothesis was something along the lines of "how do the environmental and mineralogical signatures preserved in the layered rocks reflect the aqueous processes in the crater?" Although someone else suggested a more concise and to-the-point version: "Did the big-ass mound form in a lake?" Future work for Gale included getting a better handle on the age of the deposits and identifying specifically where MSL would go to look for organics.

For Mawrth the process was a little smoother, but still painful. I don't know how professional scientists can have so much trouble stringing together a coherent set of words. in the end, the hypothesis they came up with was: "Mawrth records geologic processes during early martian history when aqueous phyllosilicate-forming processes were pervasive and persistent and provides the opportunity to understand early habitability." 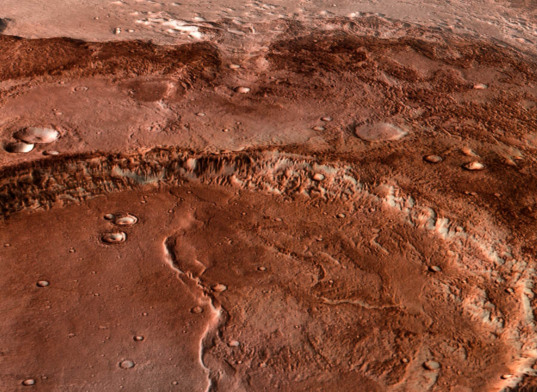 Future work for Mawrth was to figure out the timing of the formation of the stratigraphy and the mineralogy, and just generally getting a better grasp on the possible depositional settings. There was also the question of what MSL would do on an extended mission, and Jean-Pierre Bibring called for astrobiologists to take a look at the site and try to fill in that part of the story.

By the time we got to Holden, the process for the discussion was in place, and the site advocates had had time to write down a hypothesis. unfortunately, it was wordy and awkward and immediately had to be edited, but in the end it boiled down to: "Holden preserves evidence of a fluvial-lacustrine system that provides the opportunity to apply a systems approach to evaluating a sustained, habitable environment." 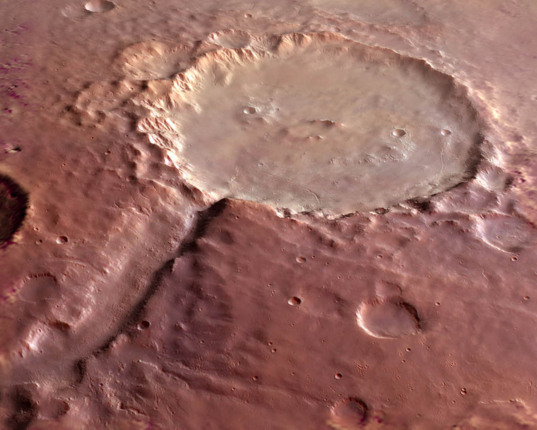 For Holden, the future work was to see if we can learn anything more about the light-toned layered deposits to see if they were formed in a lake. Also, looking at the orientation of the layers in the site was mentioned specifically.

Finally, Eberswalde benefited from watching all of the other sites go first, and the fact that it has the clearest hypothesis to test of any of the sites. Sanjeev Gupta delivered this hypothesis: "Eberswalde crater's stratigraphy, geomorphology and mineralogy records the evolution of a crater lake and associated fluvio-deltaic systems and additionally represents a habitable sedimentary environment that is favorable to the preservation of organics." This one was clear enough and well worded enough that people actually applauded when they realized we wouldn't have to agonize over the wording.

I don't have notes for future work for Eberswalde, but I am pretty sure it included looking more carefully at the minerals seen from orbit and identifying specifically where to go to access the "bottomset" beds, which should have the best chance of preserving organics (the Eberswalde presenters repeatedly answered this question - you go the the bottom of any preserved stratigraphy - but people seemed determined not to hear this answer). 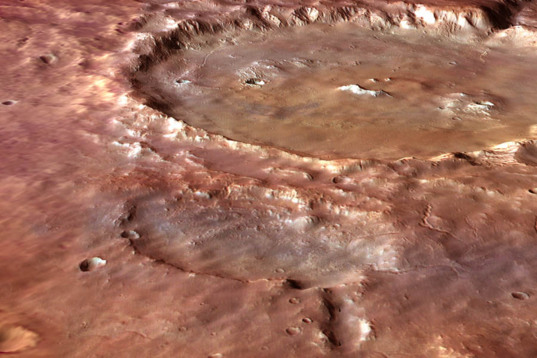 There was also a repeated call for all of the sites to identify specific targets for MSL to investigate, which can be fed into the rover drivers' attempts at estimating how long it will take to get to the primary targets of each site.

So, that wraps up the 4th MSL landing site workshop. We didn't vote any of the sites "off the island" this time, but I can tell you the impression that I got. I think Eberswalde is the clear leader among the four sites because, if you're going to look for organics on Mars, it is the only place where we can be confident that there was a low-energy depositional environment that would concentrate and preserve organics. Based on the vibe in the room, I think Mawrth would come in second place if we had voted. Even though we have no idea how the rocks there formed, they have the undeniable advantage that you land on your primary target. Also, their team has always been a very cohesive and outspoken group at these meetings. They can be annoying in their fanaticism over their site, but I think their disciplined messaging may have had some influence.

I think Gale crater would come in just behind Mawrth. It has a lot of great qualities: including clear detections of both phyllosilicates and clays, and a very thick stratigraphic sequence that would tell you about a lot of environments. But Gale is a go-to site, and even though I showed a lot of cool stuff in the ellipse, people are a bit uncomfortable with the go-to sites. Gale particularly worries people because driving up a big mound sounds risky. We saw that based on slopes, there looks to be a clear path up the mound, but i wouldn't be surprised it the rover drivers end up telling us it's going to be extremely slow to climb it. The other issue is that we can't say for sure what the mound is made of. It might have formed in a lake, but then again it might not have. This is true for all the sites except Eberswalde, which is pretty clearly a delta, but it seems to be emphasized most for Gale.

Finally, I think Holden would come in last. The Holden presenters did a great job highlighting all the good science that can be done on the alluvial fans in Holden, and with the go-to targets. But Gale has many similar features, only more-so. At both sites you land on an alluvial fan and then drive to layered rocks. Except the rocks at Holden are 100s of meters thick and the rocks at Gale are 1000s of meters thick. Holden does have nice examples of pre-impact breccia as well as the flood deposits, neither of which you would get to see at Gale, but those targets are toward the end of a long traverse at Holden, and may not tell us much about habitability.

So, that's how I think the voting would go if we had voted at this meeting. My own ranked order shuffled around throughout the meeting: each site made a very convincing argument, so tended to jump higher on my list until the next site presented its case. Now, with a few days of perspective, I would rank the sites in this order: 1. Eberswalde, 2. Gale, 3. Mawrth, 4. Holden. I personally put Gale ahead of Mawrth because even though we don't know the depositional setting for either site, at Gale there is enough stratigraphy that you get multiple chances to find a habitable environment.

Of course, there are caveats to this. If Eberswalde really did form from melted runoff caused by the Holden impact, that might knock it down on the list. If we can figure out the depositional environment at Mawrth and it's not just impact ejecta, that might bump it up in the ranking.

The bottom line coming out of this meeting is that there is still a lot we can learn about all of these sites. Some of it can only be learned by a rover, but some of it just requires a deeper look at the data we already have. MSL is a phenomenally powerful (and phenomenally expensive) machine, and we only get one. I hope this meeting gets people digging deeper to learn about these sites so that we send MSL to the best place possible, whatever that may be.