With the details of all four landing sites on the table, we started day 3 of the meeting by hearing from the engineers and several scientists about the properties of the ellipses, the risks for landing and the capabilities of the landing system. First on the schedule was Mike Watkins, who explained why MSL is so unique in terms of assessing the risk for the landing site because the landing safety is essentially the same for the sites, so the trade off becomes more science-oriented and requires a lot more knowledge of the possible targets and traverse distances.

After Watkins, Ashwin Vasavada—the deputy project scientist—told us about the atmospheric simulations that his team has been doing to make sure the weather at the sites won't mess up the landing system. He pointed out that we are one mars-year away from landing: "The next time Mars goes around the sun, we'll be there to meet it." That means that measurements being made right now will be really important in predicting the conditions when MSL arrives. It turns out that unlike previous missions, MSL will actually fly for about 100 km at a pretty constant altitude. This guided flight is what shrinks the ellipses down to nearly circular, but it means that we need to understand the weather for that whole distance. It sounds like the weather at the sites shouldn't be a problem: Vasavada said that MSL should be able to land even if there is a dust storm occurring at the landing site.

Vasavada also showed this interesting plot of day and night temperatures at each landing site, along with an extreme "test case".

Next up, Ken Herkenhoff gave a summary of all the processing that goes into making the high-resolution elevation maps based on HiRISE stereo images. It is incredibly complicated to make these things, but they're extremely important for planning the landing and traverses. Luckily, the folks at USGS have a lot of really clever techniques to make the products possible. The DTMs are available at the HiRISE website.

Matt Golombek then gave his first of two presentations. This one was about counting rocks in the landing ellipses to make sure they're safe. For the purposes of his talk, he defined a "rock" as anything that we don't want to land on or get in the way. Rock counting has been done for all the previous landing sites on Mars, so we have some good "ground truth" to compare with the rock counts from orbit with HiRISE. They use an automated algorithm to count the rocks and then fit the size distribution to a model based on previous sites to predict the number of dangerous rocks that are too small to count. In the past it has been very successful, and they're confident that all the MSL sites are safe enough. Golombek said that Holden is especially safe in terms of rocks: "I think there's maybe one rock in Holden." There were a couple of very good questions after this talk. Rob Sullivan asked whether a small softball-sized rock would be a danger if we landed right on it with a wheel, and the answer was basically no. The engineers said that the biggest risk was getting a rock in the belly that would damage the rover and/or prevent it from moving. A second question from Steve Ruff was more generally, "how concerned should we be about landing with a hobbled rover?" The engineers said, again, don't worry about it. They've been investigating some scenarios where the landing system might get stressed beyond the point where the materials have a linear behavior, but they aren't worried about breaking the rover.

unaltered bedrock with a dusting of sand or dust on top. Of course, we see other evidence that the rocks at the landing sites are altered, but for the rocks with no clear spectral signatures, I don't think it's safe to assume they're altered based on thermal inertia. 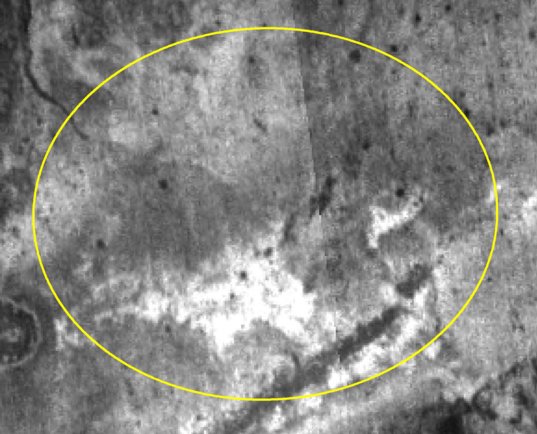 I love how the alluvial fan pops right out in the thermal data!

After the thermal inertia discussion, Golombek got up and gave a presentation with 83 slide in 30 minutes, flashing rapid-fire views of lots of different data-sets used to characterize the ellipses. He also told us that the orientation of the ellipses has changed a little bit so that now their long axis is due east-west. Taking a look at the 5 meter slopes he said that Mawrth and Eberswalde were significantly rougher than Gale and Holden (which makes sense, since Gale and Holden both land on top of nice flat alluvial fans). The topography at Mawrth and Eberswalde would be comparable to that seen in the Columbia hills, where Spirit has been exploring. Golombek also showed that there are very few "inescapable hazards" such as craters in which you could land but then couldn't escape. At this point he jokingly made fun of engineer Gentry Lee who had been worried about a big crater in the Mawrth ellipse, saying that the crater was not a target rather than an obstacle! There was also the amusing mention of a small mesa in Eberswalde where MSL would land but would have to go down some pretty steep slopes to escape. This possibility was later referred to as the "Lion King" scenario by Rob Sullivan. It's incredibly unlikely, but still hilarious to picture the rover greeting the sunrise from atop this viewpoint, which would, of course, be called Pride Rock. 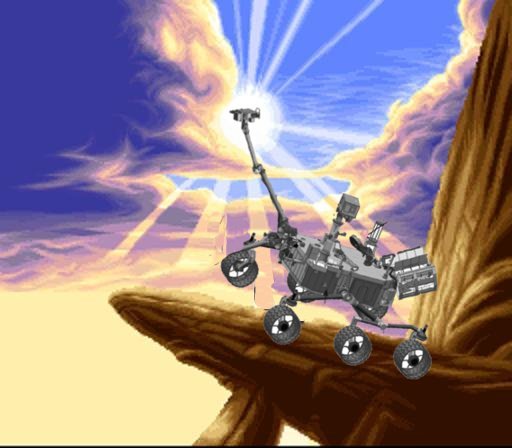 I spent too much time making this, but it had to be done.

At the end of this talk, Sullivan asked whether there is any concern that dust kicked up by the rockets could confuse the landing radar. The engineers said that yes, there is some concern, but they are doing tests with the radar on helicopters to learn more. Basically, the engineer responding said "We could probably fly through the blowing stuff. We might not like it, but we could do it."

Next, Devin Kipp, one of the engineers on the entry, descent and landing teams gave a presentation that took a look at all the things that could go wrong and basically said "we don't think these things are going to happen". He said that the chances of landing success in all of the sites are about 98-99%. Kipp also made the biggest understatement and the best example of NASA engineering-speak all day. When discussing the transition from wheel touchdown to actual roving he said: "hopefully the rover-surface interaction perpetuates for the rest of the mission." I certainly agree with that! 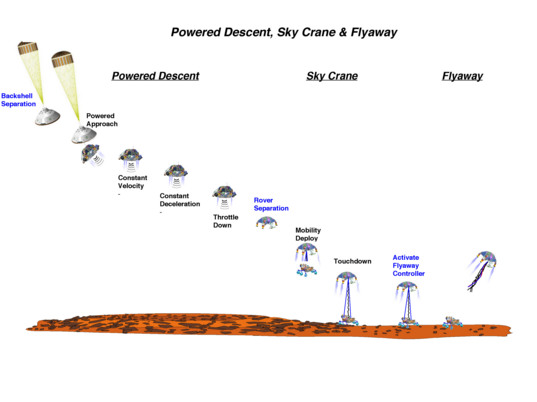 Finally, Paolo Belutta, a rover driver, gave a presentation detailing how the traverse times for each site are going to be predicted. I suspect that these traverse times are going to be the deciding factor for which site is selected. Since landing on the sites is equally safe, the risk gets pushed into the traverse portion of the mission. Belutta is making detailed maps of the sites using HiRISE images and terrain models to estimate how long it will take to drive in any given location. Then, with input from the scientists, he will compute the traverse durations for several options in each of the landing sites. At that point we'll come to the tough part where we decide whether the cost of a long traverse is worth the possible payoff.

Overall, it was an extremely positive morning and I think it laid to rest a lot of concerns that the science community had, based on rumors and partial information that had spread around the science teams. That said, I think it was also presented with full knowledge that this was a public meeting, and that word might get out if they admitted to any major problems. NASA has this mentality where it is afraid to acknowledge the difficulty of what it does until it has done it successfully. Personally, I think NASA should play up the risks and the difficulties ahead of time: they're really interesting, and they make the final successes that much more exciting, and prepare people for the worst if it happens.

In any case, it was a fascinating morning. I'll post about the big afternoon discussion of all the sites tomorrow. Stay tuned!