Holy cow. Today was jam-packed with interesting stuff about Mawrth Vallis, Holden Crater and Eberswalde Crater! I took tons of notes, and I will try to use those to assemble a coherent picture of what was presented and discussed today. But if you're too impatient to wait for me to work through those and post the more coherent summary, here are the notes in their raw and unedited form. Read them at your own risk, they're full of jargon and typos and abbreviations! I'll update that file tomorrow with tomorrow's notes too.

In the meantime, I'll start to translate those notes, starting with the first site on the table this morning: Mawrth Vallis. Joe Michalski started off the day with an overview of Mawrth emphasizing some of the key points about the landing site. Of course the obvious draw for Mawrth is that it is the best exposure of clay minerals on Mars. Clays form in wet environments and are good at trapping organics, so they are very desirable for MSL. Joe (and subsequent speakers) also emphasized that Mawrth also has morphologic diversity and that it is an extremely old portion of the martian crust. Joe also pointed out that the fact that we see lots of clay minerals at Mawrth is not because Mawrth is unusual for early Mars. It's much more likely that much of the early crust has similar minerals, but Mawrth is the best exposure. 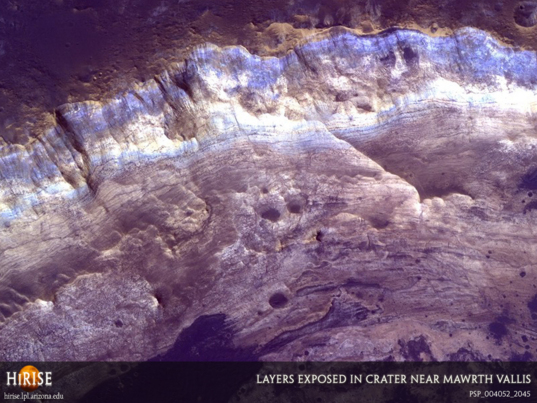 The colors in this HiRISE image correspond to changes in the mineralogy. A similar stratigraphy is seen throughout Mawrth and the surrounding region.

The next talk was by Janice Bishop who summarized the mineral diversity in the site. She showed a bewildering number of spectra from Mawrth, and drove home the fact that the mineralogy observed occurs in the same stratigraphic order all over Mawrth and all over much of the Arabia Terra region on Mars, supporting the idea that understanding Mawrth would teach us about a huge section of the planet. One of the interesting things that Janice and others showed is that these compositional layers are observed in some layered rock in the floor of Oyama crater, the huge crater to the west of the ellipse. This is interesting because it is thought that the rocks in the ellipse are older than Oyama, and obviously the rocks filling Oyama are younger. The fact that they show the same mineral stratigraphy suggests that the related alteration came after the physical deposition of the rocks.

After Janice's talk, Eldar Noe Dobrea gave an overview of the morphology of the site. He showed a lot of nice HiRISE images of the site, and also gave examples of possible models for how the rocks at Mawrth were deposited, including impact ejecta, airfall, lakes and rivers, or an ocean. Eldar also showed a map of the ellipse that was completely peppered with markers indicating that he had observed layers. This was a contentious issue later in the day because Dawn Sumner, a sedimentary geologist who mostly studies the earth, gave a presentation saying that she didn't see any convincing layering in the ellipse. Eldar also did something that John Grotzinger specifically said was very useful: he listed some of the thinks we don't know about the site. In particular, we don't know the origin of the clay-bearing rocks or the clays themselves. We also don't know the amount of water that eroded the landscape or its pH, and we don't know much about the dark unit that caps the stratigraphic sequence at Mawrth. 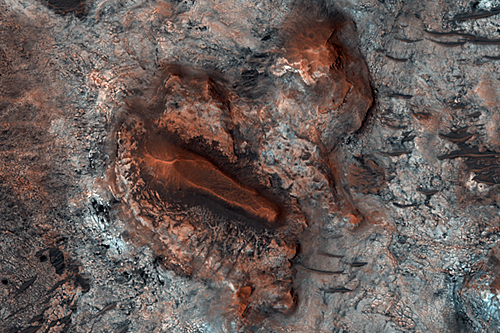 Another pretty HiRISE picture of Mawrth, showing some of the detailed surface textures.

Next up Damien Loizeau gave a nice talk about what we would do on the first day, month and year at Mawrth, and then Jean-Pierre Bibring gave a concluding presentation. Bibring emphasized the great age of the Mawrth Vallis rocks, pointing out that on earth rocks as old as Mawrth do not exist intact. All we have to work with are mineral grains preserved in younger rocks. So by going to Mawrth we might actually learn a lot about Mars as well as about the conditions on very early earth.

Finally, as I mentioned above, Dawn Sumner gave a presentation based on her studies of the physical stratigraphy at Mawrth. She suggested that most of the features at Mawrth are due to cratering and that many of the "layers" are either fractures in the rock from impacts, or are not traceable for more than a few hundred meters at most. (Dawn also showed some very cool movies illustrating some of her points, using a new 3d visualization program that some of the other folks at UC Davis have developed called Crusta.)

After Dawn's presentation there was a discussion period for Mawrth Vallis. One of the points that came up a few times is that the physical stratigraphy that Dawn was looking at is different from the mineral stratigraphy that seems to show more Al-rich clays above more Fe and Mg-bearing clays. There were also comments suggesting that it may actually be desirable to go to a complex ancient cratered surface precisely because it is confusing and there is no good terrestrial analog for us to study here on Earth. Finally, there was a question about the abundance of clay minerals. In mixing models, Francois Poulet claims to see up to 60% clay minerals at Mawrth, based on OMEGA visible and near-IR data. But in thermal IR observations don't see nearly that abundance. Steve Ruff, an expert in the thermal IR, said that TES does see some evidence of alteration but not at that sort of abundance. One explanation that he suggested is that the phyllosilicates might be poorly crystalline, so that VNIR observations see something but thermal IR doesn't.

At the end of the discussion of Mawrth, I felt a lot better about the site than I did before going in. There is clearly a lot of good stuff to do there, and it has a couple of undeniable advantages: it is clearly the oldest site, and you get to land on your primary target. But I'm also concerned by what I hear from terrestrial geologists who are very concerned about how much Mawrth would actually tell us about the habitability of Mars. Yes, it has spectacular phyllosilicates, but it's not clear that they would trap any organics since we don't know what the depositional setting was. I think despite this uncertainty, if you polled the community, Mawrth would be one of the top two sites.