The final site of the four that we discussed yesterday was Eberswalde, which of course is interesting because of the big delta that is preserved in the western part of the crater. The first presentation on Eberswalde was an impassioned and really interesting talk by terrestrial geomorphologist Bill Dietrich. Bill talked about how Eberswalde is an excellent site for going beyond just making qualitative statements about water on Mars and actually learning quantitative information about the fluvial system. By making surface measurements, Dietrich showed that you can learn things like how much water was actually flowing and what the individual flow events were like. He also talked about the meandering channels in the delta and those seen on the floor of Eberswalde and Gale. Dietrich showed evidence from earth that to form meandering channels you need to have something that strengthens the banks of the river. Typically it is vegetation on earth, but ice, clay-sized particles or chemical cements can also do the job, and MSL would be able to tell which of these it was. 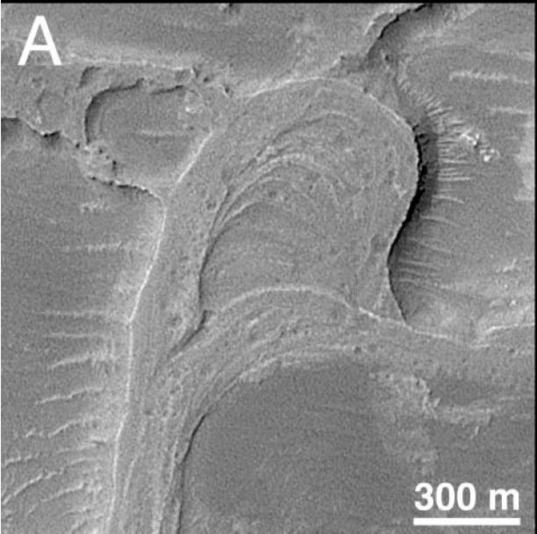 "Your pulse should quicken every time you see this picture!" - Bill Dietrich

After Dietrich's talk, my officemate Melissa Rice gave a presentation highlighting the types of things in the landing ellipse. Her talk pointed out that there's more to do in Eberswalde than just land and drive due west to the delta: there is a consistent stratigraphy in lots of the outcrops in the ellipse, along with chunks of ejecta from Holden, inverted channels, cemented fractures, and other smaller fans. I think her talk eased a lot of people's minds who wanted to like Eberswalde but were afraid of a long go-to portion with not a lot to do until you get to the delta.

Next up, another terrestrial expert, Sanjeev Gupta gave a talk about the value of a source-to-sink relationship. He started his talk with an aerial photo of a desert landscape on Earth with really complicated geology and had this hilarious quote from when he was a postdoc: "I was 'skycraned' into this area, given a three month 'battery life' and told to worry about my career." He went on to drive home how awesome Eberswalde is because you can see exactly where the sediment came from and where it ended up. "Field geologists on Earth would kill to have what we see at Eberswalde." Gupta also emphasized that at Eberswalde we have a clear testable hypothesis: that the feature observed is a delta that formed in a lake. He also said something that I didn't know: the slope of a delta is determined by grain size, so the fact that Eberswalde has a very shallow slope suggests very small grain size, which is good for preserving organic molecules. 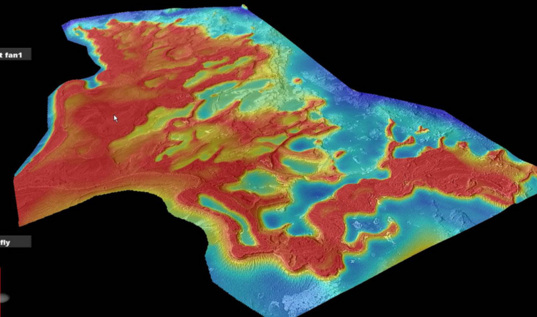 The entire delta is preserved in inverted relief, likely due to coarser grains in the channel beds making them more resistant to erosion.

Kevin Lewis gave a sort of summary presentation that also highlighted a couple of important points. The first is that many of the channels that cut the wall at Eberswalde end at the same elevation, and that elevation matches pretty well with a saddle point where water from the western crater would spill over into the eastern crater. This spillway might have acted like a dam to maintain the water level in Eberswalde at a specific elevation. Lewis also reminded everyone that the presence of a delta gives MSL a "built-in roadmap": if you want to reach the fine-grained sediment that is most likely to preserve organics, you want to go to the lowest beds in the delta.

Finally, Nicolas Mangold gave a very interesting and controversial talk suggesting that all of the flowing water in Eberswalde may be due to the hot ejecta from Holden crater melting ice. This would mean that Eberswalde could have formed on a Mars that was otherwise not particularly friendly to life and that the lake could have been very transient.

That launched a really vigorous discussion about the site. Ross Irwin claimed that the amount of water required to carve the channels in Holden and Eberswalde was way too high to have all come from ejecta-induced melting. And John Grant pointed to other nearby craters of a similar age that have alluvial fans but would not have been triggered by the Holden impact. There were cries that we need to look for evidence of a shoreline, followed by others responding that it's unlikely you would see a shoreline. 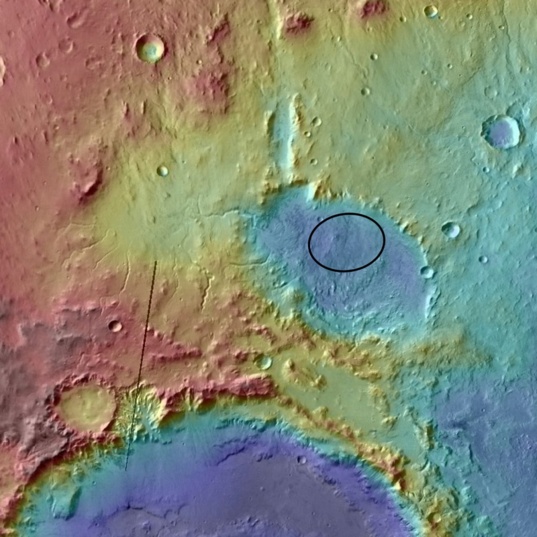 Context topographic view, showing the ellipse in Eberswalde crater. Holden crater is the big crater in the south of this view.

There were also a number of questions that appeared to me to be deliberate and rather transparent attempts to make this site look worse than Mawrth. Coincidentally, these questions all came from Mawrth advocates! First, someone asked whether all we would really be learning about at Eberswalde is "what sorts of processes form deltas on Mars". Kelin Whipple responded, saying that if you don't care about that specific question that's fine, but by being able to take the study of the hydrologic system to a detailed quantitative level, it teaches you a lot about the climate of early Mars. Sanjeev Gupta also echoed that, saying that the delta gives you information that lets you test the big questions about martian climate.

Another question that I found really pretty absurd, was "how would MSL's measurements supplement our understanding of Mars beyond "wow! There's a delta!" I don't know where this person was when Bill Dietrich and Sanjeev Gupta were giving their presentations. Dietrich very politely recapped his points, that we would go from a qualitative to a quantitative understanding of the system with lots more information about the environment. He countered this question by saying that you could just as well simplify Mawrth down to "Wow there are clays on mars!"

A third example of these rather leading questions was along the lines of: "We've been focusing on the structure of this delta, but what do we use all the compositional instruments on MSL for?" The room responded to this one with shocked disbelief before Scott McLennan, a geochemist, pointed out that understanding the context is just as important for geochemistry as it is for fluvial geomorphology.

There was a lot more discussion, but those were some of the more "interesting" questions. I found it rather annoying that the Mawrth advocates asked leading questions that they (I hope!) already knew the answer to in an attempt to make Eberswalde look bad. Still, at the end of the day, I think Eberswalde is the clear favorite landing site. The only troubling thing is the possibility that it could have formed rapidly due to melt from the Holden ejecta, and that is the number one thing to look into before we decide to send MSL there.

To me, Eberswalde is an incredibly strong site because it fits the MSL objectives almost perfectly. It is the only place on Mars where there is a clear place to look where the processes would concentrate and preserve any organic material that was present. It is the best evidence for lakes on Mars, and toward the end of the discussion of the site, Jim Bell had a good comment. He pointed out that there's this apocryphal story that MER landed in Gusev and everyone was totally shocked that there was lava there instead of a lake bed. He said that actually there was a lot of debate beforehand. For Eberswalde, the community is much more in agreement that there was a lake. It would obviously be a big deal to visit a lake on Mars, but it would also be a huge result if we went to Eberswalde and it turned out not to be a lake!

If you want to read the rest of the discussion of Eberswalde, check my notes. It had, by far, the longest and most interesting discussion session. You can also read ahead to see what we heard about this morning in terms of the safety of the sites, and some sketchy notes of the afternoon discussion. And if you really want the nitty gritty details, the presentations from the landing site meeting are now available online.