It has begun! Today was the first of a three day workshop in which the Mars science community (not just those directly involved in the MSL mission) gathers together and hashes out what we know and what we don't know about the four finalist MSL landing sites. 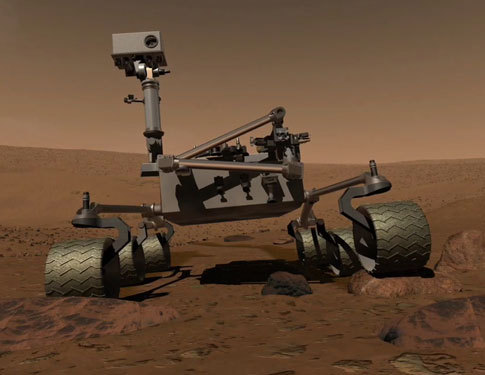 For me the week actually started yesterday at the MSL team meeting, where we got lots of updates on the various aspects of the mission. Unfortunately, I don't know how much of what I heard yesterday is safe to share with the world. Having been scolded before for sharing too much here I will just say that it's really exciting to see all the pieces of the puzzle coming together.

Today, and for the rest of the week, everything is fair game to share with you, so I will do my best! Emily Lakdawalla will also be blogging parts of the meeting, so I'll also point you to her posts about the meeting as they go up. In fact, you should go check out her introductory post right now. You might also want to refresh your memory about the four sites by reading this summary.

Today started off with some overview talks from the project manager Mike Watkins and project scientist John Grotzinger. Mike showed some awesome pictures of MSL (aka Curiosity), which is really starting to look like a rover. A jaw-droppingly huge rover. Watkins also had some nice analogies to go along with his pictures to convey just how huge Curiosity is. Remember the little Sojourner rover? It could just about use MSL's wheels like hamster wheels. MSL is also really tall: its mast cameras could look Shaq straight in the eye, and its gigantic arm is so long it could almost dunk! 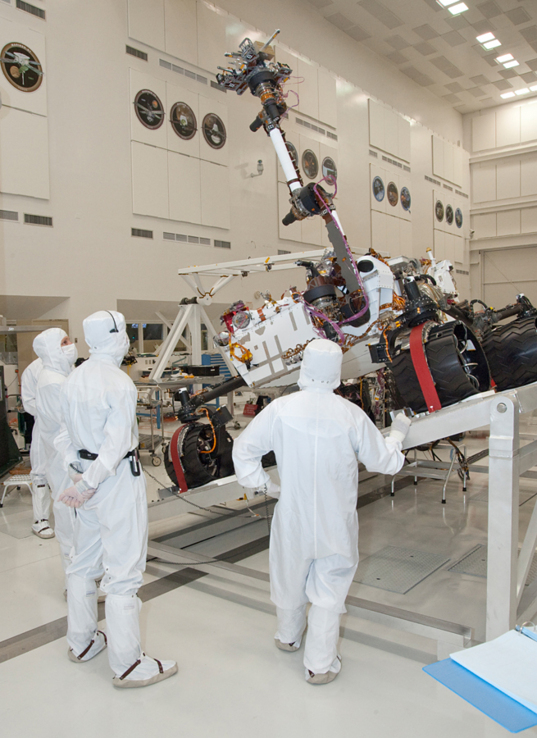 Curiosity is a huge machine

Note that the giant blob of instruments are not yet mounted on the arm in this photo.

I'm going to cheat and share a little of what I heard yesterday because this arm is just amazing and they used another good analogy. The instrument package at the end of the arm is huge: about 35 kg. You can picture this as something the size and weight of a lawn mower mounted on the end of a seven foot arm. The arm itself weighs 70 kg, and it is strong enough to dead lift that lawnmower even when the arm is fully extended. The MER rovers weigh 172 kg, the MSL arm weighs 105 kg. It. Is. Huge.

It finally sank in when I saw the presentations yesterday and today just how massive this rover is.

Anyway, back to today's presentations. After the introduction, there were a series of talks about the preservation of biosignatures. One of the main take home points from these was that context is critically important for detecting and understanding biosignatures. If you understand the geology, you can try to look in places that maximize your chances of finding something. And then if you do find something, you can draw much better conclusions if you know its environment. This sort of argument makes a site like Eberswalde, where the story of a delta deposit in a crater lake is pretty well understood much more appealing than a site like Mawrth, where there are beautiful minerals, but we don't really know the geologic story. Gale and Holden are both somewhere in between.

After biosignatures, there was a set of presentations about the mineralogy of the landing sites. This started with Frank Seelos unveiling the new and improved website containing a set of CRISM spectral images of the landing sites. You should go check them out: he specifically said that he would love it if we all melted his servers! 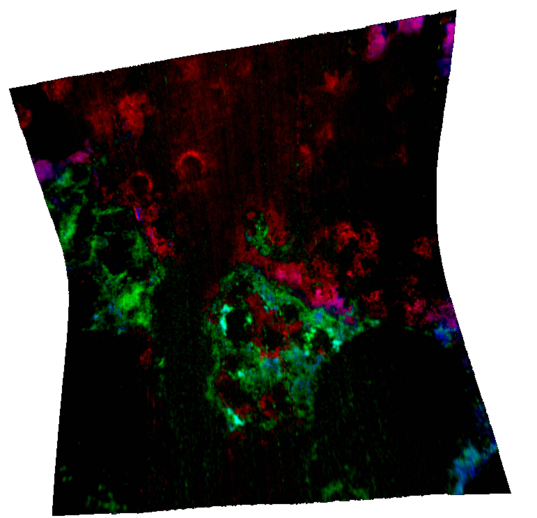 An example CRISM map of part of the Mawrth Vallis landing site, showing off the spectacular hydrated minerals in the site.

We also heard from Selby Cull, a graduate student who is attempting to use detailed models to figure out how much of a given mineral is in a sample based on its spectrum. Although it sounds straightforward, this is actually a phenomenally complex problem that planetary scientists have been grappling with for decades. It would be awesome if we could do this, but I'm skeptical.

After Selby, Ray Arvidson gave a talk about tying orbital to surface data at the MER Opportunity landing site and lessons learned that MSL should keep in mind. Bottom line (paraphrased) is that wherever you go, Mars is going to be more surprising and more interesting than we can imagine!

Finally Ralph Milliken shared his results on the compositions of the landing sites based on CRISM observations. It turns out that, using a subtle spectral parameter, you can estimate whether a given clay mineral detection is more or less "evolved" (where evolution could be due to burial or impacts among other things). Ralph also showed some exciting new stuff at Gale crater, including an example of a set of minerals visible in the southeastern portion of the Gale crater mound that looks very similar to the stack of mineral signatures seen near the landing ellipse. 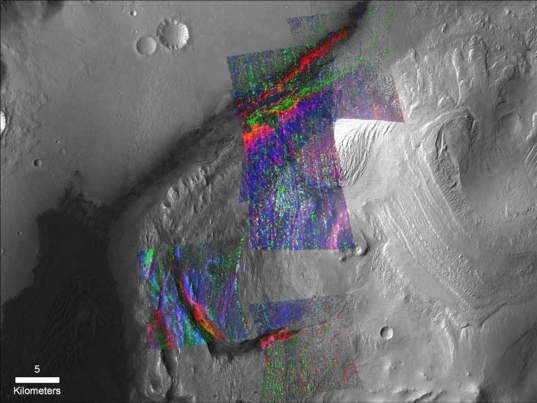 A colorful map of the mineralogy at Gale Crater from Ralph Milliken. Greens are phyllosilicates, blue and magenta are sulfates, red is olivine, and orange is mixed sulfates and clays. The landing site is at the top center of this image, and the rover would ideally drive to the northwestern part of the mound, where there is lots of CRISM coverage.

Finally, after the mineralogy talks were over, we started hearing presentations about the specific landing sites. Gale was up first, and after Ken Edgett summarized the crater's global and regional context along with some of what you can see within the crater, I gave my presentation showing off the interesting stuff that can be accessed in the ellipse and on a notional traverse up the lower portion of the mound. After me, my adviser Jim Bell presented about the composition of the stuff at Gale, and then finally Dawn Sumner gave a really interesting presentation about how to test some of our hypotheses at Gale Crater.

In the discussion of Gale the inevitable questions came up. One was: how old is the mound? The "problem" with answering that is that we think most of the terrain at Gale was buried and has since been exhumed again. That can totally throw off your estimated ages based on crater counting. The properties of the surface matter can too: some surfaces are hard and erosion resistant, so they tend to have more small craters than adjacent surfaces even if they are younger. The best estimate is that Gale crater formed at the end of the "Noachian" period of martian history and the mound formed sometime in the late Noachian to early Hesperian. The exact timing of these epochs isn't all that well constrained, but the Noachian ended around 3.8 to 3.5 billion years ago, and it's fair to say that Gale and its mound are about that old.

We also talked about what it might mean if the whole mound is wind-blown grains. It's certainly possible, but very difficult to tell from orbit. If the grains just filled up a dry crater, that might not be so good for habitability, but the mound is carved by canyons so we know there was flowing water well after the mound material had been deposited and turned to rock. On the other end of the spectrum, the mound might all be wind-blown grains, but those could have been trapped in the crater because it was full of water. As we heard earlier in the day, fresh basaltic sand plus water would provide the chemical energy necessary to support a pretty impressive chemolithoautotrophic (aka rock-eating) biomass.

There was also a lot of discussion of the evidence that Gale was actually buried. Someone asked whether there are any patches of layered material on the crater wall that match the mound layers. There aren't, but I pointed out that there is a nice outlier of layered material hidden in the dune field 20km west of the mound itself. Ken Edgett reminded people (as he has been doing for 10+ years) that "this isn't the mars you're used to thinking about", that entire regions have been buried and exhumed, and that this can happen without leaving a trace on the underlying surface. He also pointed to Henry crater as a Gale-sized example that does have a mound that matches with material on the walls. The question of why Gale seems to have preserved its huge mound of sediment, but all the other craters nearby did not keep theirs came up, and John Grant suggested that we do crater counting on the nearby craters which we know are older than Gale to see if their surfaces are anomalously young - as if they had been buried for a few billion years.

I also got the question of whether we should try to visit all of the cool stuff that I showed in the landing ellipse if the true goal of the mission is the mound. This is going to be the core question for this mission. At all the sites but Mawrth, you land on cool stuff but your main goal is outside the landing ellipse. The tradeoff between doing the "safe science" right away in the ellipse and sacrificing science early on to be able to make it to potentially more rewarding targets is going to be a huge part of the landing site discussion over the next few months. On Wednesday we are going to hear from some of the engineers and rover drivers about the engineering constraints on the mission, and then the Landing Site Working Group (a small subset of scientists that have been looking very closely at the landing site) will work with the rover drivers to identify the key targets at a given site and the key observations we want to make at those targets. From there, the engineers will come up with a set of potential traverses with detailed estimates of how long each will take. Since all of the sites are safe to land in, I think these estimates will play a major role in finally narrowing down to the final selection next spring.