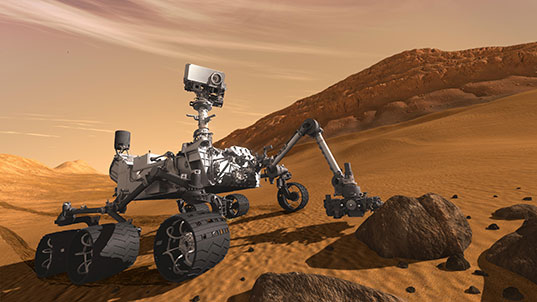 Well folks, I'm off to Pasadena to help the Mars community decide where to send its next rover. Long-time readers will recall that i've been to a couple of these things before and they're always fascinating. I was going to post a reminder of what the four finalist sites are, with pros and cons and all that, but it turns out I don't have to! My friend Lisa Grossman, a former Cornell astronomy major, is now a science writer for Wired! She interviewed me and my adviser earlier this week and put together a nice article summarizing the sites. I'm quoted in it quite a bit, so rather than repeat the same stuff, I'll just point you over to her piece.

There are a few points of clarification that I should mention. First, the article says that MSL is searching for life, and that's not really true. MSL is searching for signs of habitability. Obviously finding life would be a pretty good sign! But habitability is broader than just the search for life or even the search for organic molecules. Evidence for habitability could come from the texture of a certain rock telling us that it was deposited in water, or from the detailed chemistry revealing that the minerals in the rock could only form in benign liquid water.

Also, she's right that some of the clays at Mawrth are kaolinites, which tend to form on earth in tropical soils. But to clarify, I don't think anyone is saying that the huge amount of kaolinite clays at Mawrth are the result of tropical conditions. They do suggest that there was a lot of water involved though, which is why Mawrth is so interesting.

A final clarification: in the article, it mentions that it will take "several days of hard driving" to get to some of the go-to sites, where the really interesting stuff is outside the ellipse. If it were several days, that would be no big deal. It is going to be more like a year or two. A lot of people are really nervous about landing, only to have to buckle down and drive drive drive to get to the main target of the mission. Of course, all of the sites have good science to do in the landing ellipse, but that is a blessing and a curse for a go-to site. On the one hand, you get some results early on in the mission, but if you don't have a lot of discipline, you can spend all your time staring at the rocks at your feet and never get to go climb the mountains in the distance.

With that, I'll let you go read the article. You can also check out my old blog posts about the sites from the last time one of these workshops was held (Gale, Holden, Mawrth and Eberswalde). I'm going to do my best to take notes and blog about the meeting, and Emily Lakdawalla of the Planetary Society will be there for part of the meeting as well. We'll do our best to keep you informed!

PS - You should totally check out the comments on the Wired article, where someone calls me out for saying that there was water on Mars and says that we Mars scientists are either stupid or have ulterior motives. Someone hasn't been paying attention to every press release about Mars for the past decade or so.