Big news folks! The huge paper that I've been working on for the last couple years is finally, unbelievably, published! Even better for you, it is published at the Mars Journal, which is an open-access journal. Just head on over and you can download all 53 pages of pure, distilled Science!

In case you don't want to wade through that many pages (and almost as many figures) of Mars geomorphology jargon, I'll summarize here. 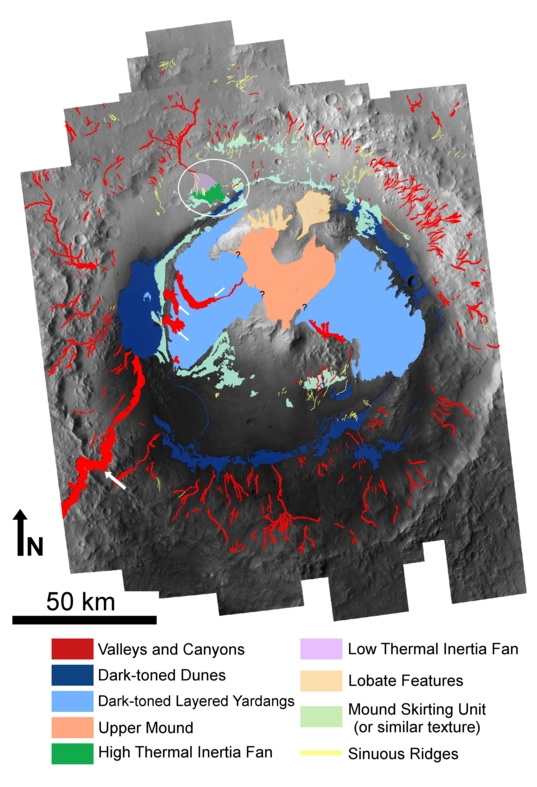 Gale Crater is a large (155 km diameter) crater that sits just south of the martian equator on the boundary between the rugged, cratered highlands to the south and the smooth plains of the northern hemisphere. Gale is special because it's not just a big hole in the ground: in the middle of the crater is a vast mountain of layered rocks that towers nearly 6 kilometers above the crater floor. As I've mentioned before on this blog, geologists love layers, because they are formed in the rock record when something changes. So the Gale Crater mound is a giant record of the changes that have taken place on Mars since the crater formed3 or 4 billion years ago. This fascinating stratigraphic section has evidence of water-bearing minerals like clays and sulfates, and the detections of these minerals seem to follow certain layers, so the hope is that those layers were deposited during a time when Mars was more habitable. That's why Gale Crater is one of the four finalist landing sites for Mars Science Laboratory!

Even though a lot of people knew that Gale had this interesting mound, not a lot of work had been done on the crater, so in an effort to help the Mars community learn all we can about the geology of this possible landing site before making the decision whether or not to land there, I dove into the image data for Gale crater. I started with the Context Camera (CTX), making a huge mosaic covering the whole crater. I used that mosaic to map out easy-to-map features like sand dunes and branching channel networks.This was scientifically useful because it shows that there are lots of channels formed by water flowing into the crater, but it was also a good way for me to learn to use the mapping software ArcGIS.

After that, I spent a while working on determining the orientation of the layers in the mound using a digital elevation model based on CTX images. This work was also educational, but ultimately after showing it to several colleagues I found it was drawing criticism and wasn't telling us a lot about the mound, so that was cut from the final paper.

I moved on and pored over the various HiRISE images of the potential landing site and the mound, identifying "units" based on their appearance in HiRISE, supplemented with CTX, thermal inertia data from THEMIS, and spectral data from CRISM. In doing so, I was able to put together a more detailed picture of what a rover might encounter if it landed on the crater floor and drove up the mound. 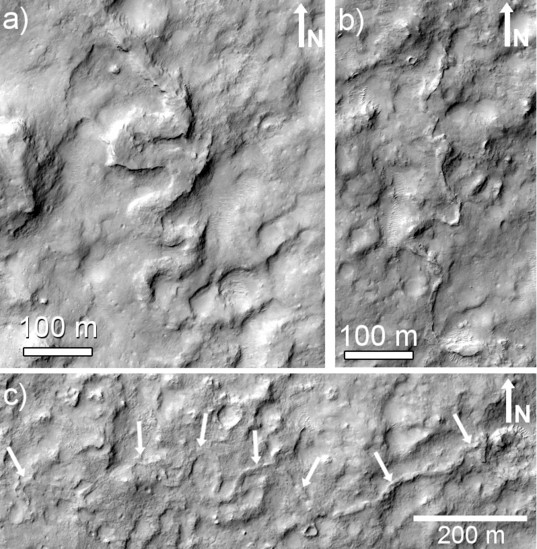 The landing site is centered on a fan of material that extends from the northwestern wall of the crater and ends a few kilometers from the base of the mound. Looking closely at the fan, it turns out that about two thirds of it is mantled with what looks like dust or soil, but the final third, closest to the mound, has been stripped bare, exposing a bunch of fractured layered rock. That's interesting in an of itself, but the fan isn't the only thing in the landing ellipse. I also found some examples of inverted channels: riverbeds that were resistant to erosion and ended up as mesas when the surrounding land was stripped away. There are also patches of a unit that I called the "mound-skirting unit" within the ellipse.

This mound-skirting unit is found all around the crater and tends to be erosion resistant, forming mesas. It also looks like it might be related to flowing water in some places: chains of mesas made of this unit extend across the floor from channels and fans on the crater wall. But elsewhere, there are parallel ridges in the mound-skirting unit that might be the remnants of ancient dunes that were petrified. One notable patch of the mound-skirting unit is partway up on the northwest side of the mound, right at the end of a channel that was carved into the layers of the mound and later filled with debris. This has been referred to as a fan, and if I had just looked at it without context I would have called it a fan too! But it has almost the exact same texture as the mound skirting unit nearby. My interpretation for this was that the original fan is mostly eroded away, but because there was a fan sitting on top of the mound skirting unit in this spot, it was protected from erosion so it remains as a mesa at the end of the filled channel. 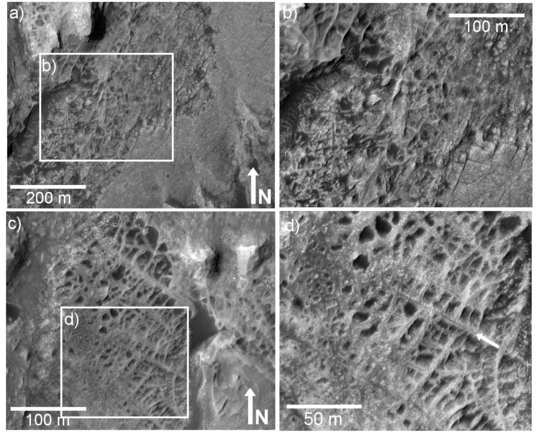 Examples of erosion-resistant ridges on the Gale mound that might be due to water percolating through the rocks.

Another interesting thing that I noted about the surface of the lower mound is that there are cracks all over the place that look like they are resisting erosion, becoming lattices of ridges. This could happen if water was flowing through the rocks, cementing the material near the fractures and making them last longer than the un-cemented surrounding rock. These fractures occur in a part of the mound that shows hydrated sulfate signatures in CRISM, so there is some supporting evidence that water was involved.

I also looked at some of the material near the top of the mound, far beyond where MSL is likely to reach even with multiple extended missions, and I'm really glad I did. One of the big questions about the Gale mound is what type of rocks it is made of. It's a lot nicer for habitability if you can say for sure that rocks formed in a lakebed instead of a desert, but it's frustratingly difficult to tell the difference with orbital data. The upper part of the Gale mound might be an exception though: If you look really carefully, in some of the HiRISE images there is a strange "swirly" looking pattern that I interpreted as a cross-section through ancient sand dunes. If true (and there are certainly other possible explanations), this tells us that the upper mound was once a location where sand collected to form dunes, meaning it was probably a low point rather than a high point. 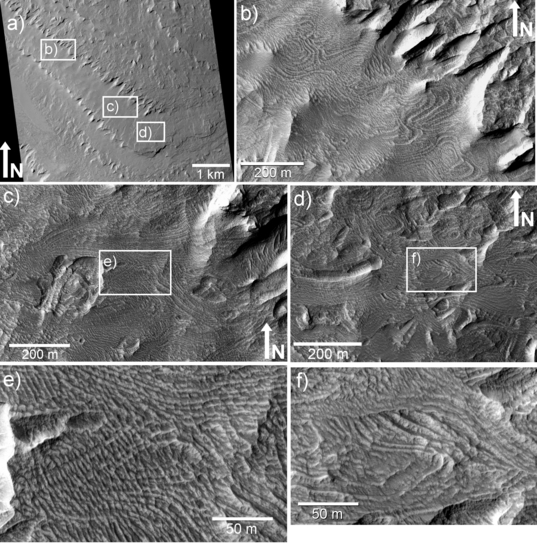 Texture in the upper mound of Gale

Examples of the weird texture in the upper mound that might be evidence that these rocks were once sand dunes.

The idea that Gale has been buried isn't a new one, and after looking at the geology of the mound, I think it has actually been buried and unburied several times. The lower layers of the mound have deep gorges carved into them and craters on the surface, suggesting that they're old, and that they were already eroded into a mound back when water was eroding things on mars. Above the lower mound is the upper mound, which looks like it was deposited separately, possibly much later. There is a channel in the lower mound that disappears beneath the upper mound to mark the "unconformity" between these two units. This means that just because I found what I think are petrified dunes in the upper mound, the lower mound isn't necessarily the same stuff.

There's lots more in the paper, but those are some of the key points. In a couple weeks I'll be presenting at the MSL Landing Site workshop, where people who have been studying the four potential landing sites will share their results and the whole Mars community will argue and try to decide which site we should land at. These meetings are always exciting, and I'll do my best to blog about the meeting here. The final decision won't happen at the upcoming meeting, but it will be interesting to see if any sort of consensus starts to form. (don't hold your breath!)