So, you may have heard the news making the rounds last week that a new analysis of the Viking data suggests there may actually be organics and (dare I even say it?) life on Mars! Yawn. Consider me underwhelmed. 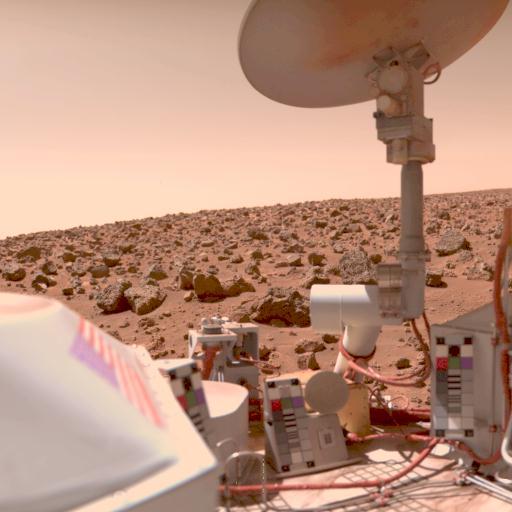 The gist of the story is this: A long-standing mystery in Mars science has been why the Viking instruments were unable to detect any organic molecules on Mars, not even at a level that would put Mars on par with the moon. Now, 30 years later, the Phoenix lander discovered the perchlorate molecule in the arctic martian soil. Perchlorate is a powerful oxidizer, and by heating a soil sample containing organics and perchlorate, you're bound to destroy the organics. So, if there were perchlorates at the Viking site, then maybe the Viking instruments destroyed the very organics they were trying to find! The few traces of organic compounds detected by Viking were interpreted as residue from the chemicals used to clean the instrument, but the new results show that organics oxidized by perchlorate can also form those compounds.

To me, this sounds pretty familiar. See, as I understand it, the leading theory for what happened to the organics on Mars to bring them to levels below the moon is that some unknown oxidizing agent had destroyed the organics. So, now we know what the oxidizing agent might be, but it seems that the prevailing theory still holds. I suppose the excitement comes from the possibility that the organics could remain intact until the soil is heated, and so low-temperature investigations might detect them. But the modeling in the paper did not consider that the organics were sitting at the Martian surface for perhaps billions of years. Yes, heating in the oven might destroy the organics, but that may be meaningless if they were all broken down millions of years ago by UV radiation. As for the traces of organics that Viking did detect, as the press release mentions, they had the same Cl isotope ratio as Earth. Now, it's not impossible that Mars has the same ratio as Earth, but it would be a coincidence. Invoking coincidences in science makes me uncomfortable.

So, maybe I'm being an aguafiestas again with this press release, but I just can't get that excited about the announcement. I will say that I am really looking forward to the results from the SAM instrument on MSL, which should be powerful enough to detect organics wherever they are hiding on the Martian surface. I'm not naive enough to claim that it will answer all our questions, but it might. Even an aguafiestas can hope!